Home › Opinion › Gary Jones and Me

Gary Jones and Me 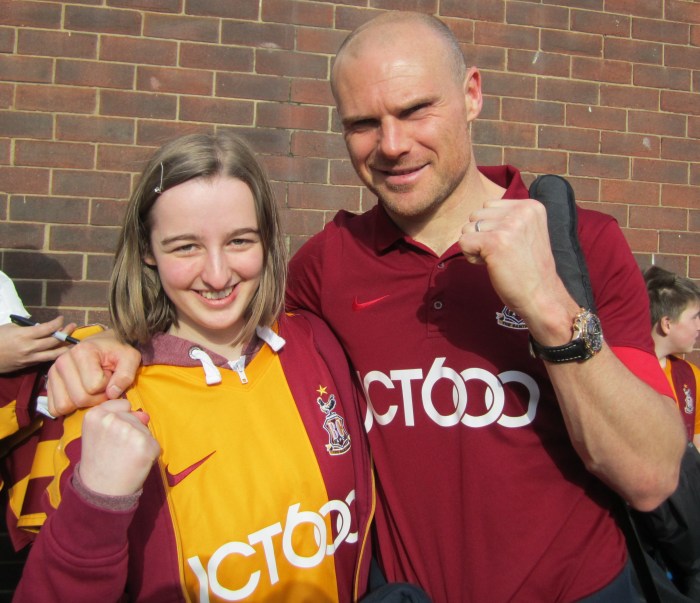 There was something unfitting about the way I found out. Sunday morning, freezing in a caravan 85 miles away from Bradford, glancing up wearily from a magazine, my dad pointing at the ‘news in brief’ section of a national newspaper.

There was something devastatingly disparaging about seeing him reduced to ‘news in brief’. Gary Jones isn’t ‘news in brief’. A year ago, he was on the front page of that same newspaper, kissing the head of brave Jake Turton as he sobbed tears of disbelief into the cold Birmingham night. A year ago next week, in fact, he was at the centre of all the newspaper sport supplements, dancing on the podium at Wembley. And now, ‘news in brief’? That’s just not right.

And just ‘released’? Just like that? It breaks my heart. I get you can’t be sentimental here; I get that the budget isn’t bottomless; I get that this window had to be about revolution, not evolution; I get that ruthless saying that no one owes anyone anything in football. But just gone? Just, “Thanks, Gary, but bye.” That really stings.

He was in the programme for the final home game, telling us how much he loves it at Bradford, saying he wants to be here next year – “hang around here for a couple more years yet”, those were his words. I’d steadied myself for Connell’s exit, prepared for Nahki’s departure, steeled myself for Thompson’s swansong – but this? Gary Jones, just ‘released’? It’s that word I can’t stand. Released. It doesn’t do him justice.

Gary Jones is my joint-favourite ever player. These exit wounds won’t heal quickly.

You close your eyes and it plays like a montage in your mind.

The first kick until the last, everything else between.

The Arsenal goal: raising his arm to the sky at the corner flag, slinking in, spinning his boot – the ball falling perfectly, Atkinson, Thompson. Jones’ penalty and the celebrations – the frantic fist pumping, the manic screaming peppered with “come ons” and “’ave its”, our captain doing everything we wanted to but didn’t dare to: believe.

The opening day against Carlisle – charging forwards, overrunning the United midfield with Nathan Doyle, blasting home to open his League One account.

The spirit, the pride, the ability, the passion – the heartbeat of this generation, the pulse of this team.

Sheffield United and Crewe Alexandra. A heartbroken Gary Jones yelling, shouting, screaming, at his team mates, screaming at them to play, the hurt leaking from his face: show me it matters to you. Show me you care as much as I do. Gary Jones, single-handedly refusing to give up, refusing to surrender, refusing to hand over his spirit. Gary Jones hauling City to two points. Gary Jones, digging that inch deeper when the chips were down to drag Bradford through that winless run. The mark of a true winner.

The mark of Gary Jones.

Perhaps it was fitting his last Valley Parade outing came as it did. The delivery the same as always, curling in perfectly from the same corner flag at which he stamped his name into Bantams folklore. The Midland Road chant merging into his chant, his song, sung passionately enough to send every hair on his neck pricking upwards, his magical tune searing straight into his magical heart. The fan in the Kop throwing down a Gary Jones banner, Jones signing it, Jones weeping into Darby’s arms – an ending written months before, an ending perfect to the last note.

Every tear, every fist-pump, every crunching tackle, encapsulated in that emotional moment.

It was the week of the final game of the season at Cheltenham, two weeks before the Burton home leg of the play-off semi-finals. Shelf Bantams were hosting a ‘Darby and Jones’ night, a meet-and-greet type-thing at the Shoulder of Mutton pub with, obviously, Stephen Darby and Gary Jones. On the off chance I’d be able to speak to them for my blog, I stuffed my voice recorder and a set of questions into my back pocket, hoping that they’d say yes to me, that they wouldn’t be too busy, that you didn’t need some sort of magical media pass to interview two Bradford City players.

You didn’t. Mum asked Gary Jones for me (I was too shy to ask for anything other than his autograph on my Wembley poster) and he said he’d find me after the presentation – he even roped in Darby for me, too.

And so we sat, Jones and me, on a bench in the darkening pub car park together, me shivering in my City hoodie and hanging onto his every word as he talked about the cup run, the impending play-offs and the special sense of camaraderie in the squad. He was absolutely perfect: patient, serious, truthful, professional, humorous – he went above and beyond that night.

He and Darby asked for my blog address, asked when the post would be uploaded, asked about writing the blog, whether I wanted to be a journalist, said they’d have a look over the next few days. For them, it was probably quite a menial thing – they’ll do scores of interviews over a season, so my awkwardly rudimentary one ahead of the final few weeks was just another of many – but it meant the world to me. Though I cringe at that piece now, I was proud of the 800 hits it received.

I was prouder, still, of the fact Gary Jones was one of those 800.

We were standing behind the goals at Guiseley for the annual pre-season friendly, applauding the City side as we basked in the searing July sun. As the players left towards the tunnel, Gary Jones came over to the gate and stopped by my brother and me.

For an introverted and unconfident 15 year old who’d spent the last few months watching Jones’ every move in stunned admiration, genuinely struggling to believe we’d managed to acquire such a player, it was a dream come true to think that the skipper had even remembered me, let alone read my blog and, um, liked it.

But, by January, we all knew a cull was coming. I waited outside the players’ entrance on the last home game of this season (I’m coming across as such a huge fangirl here, but meh) for final pictures with the History Makers ahead of the anticipated departures, and my mum unashamedly asked Jones if he recognised me.

“Of course I do!” he grinned. “We did that interview together, didn’t we? It was good, wasn’t it? You’re a good interviewer.”

“Will you be here next season, Jones?” asked my mum.

“Oh, I don’t know. You’ll have to ask the gaffer about that,” he laughed.

To me, Gary Jones will always be magic.

I trust Phil Parkinson. Deep down, I know this is probably for the best, and there will be some reason why Jones isn’t here next season. Sentiment aside, I still would have kept him – for me, he’s never really looked out of his depth at this level, and the 4-5-1, with Doyle in the holding role, and the 4-3-1-2 deployed against Peterborough, were so excitingly effective, it was difficult to work out why we’d never tried them earlier. I would have retained Gary as a player-coach, at least, even if he’d only figured in a fraction of the games, but the consensus seems to be that the warchest couldn’t feasibly stretch that far. That’s a shame. You can’t teach passion; you can only instil it. Imagine a Gary Jones team talk before kick-off – motivational can’t even come close, surely.

I trust Phil Parkinson. I trust he’s got this right. I hope he has – this would be too costly, too expensive, too condemning a mistake to make. There will be something too wrenching about Gary Jones not being there at all, not even stood on the sidelines. In many ways, I’m really dreading August – I don’t want to watch a City team without that man in it.

I hope he stays in football. I hope he finds another club. I hope he can change their fortunes the way he changed ours, dragging a different team out of a rut with the same spirit and endeavour with which he set himself forever in our hearts.

But there’s only one thing I can really say. Only one thing could ever come close to what I want to say, yet, at the same time, remain so heartbreakingly far away from everything he absolutely deserves to hear. I’m not articulate enough to write a piece that sums up my hero well enough. Nothing I can write will even scratch the surface of what he’s given to this club, how his goals made me feel, how he made our dreams come true.

But I can try. Here goes.

Gary Jones: thank you for everything.