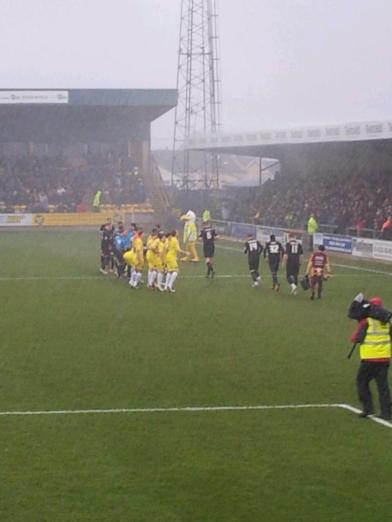 It’s been an odd summer so far really. Usually, close seasons  featuring a major tournament are immediately followed by the first  pre-season friendly – in fact, two years ago, Bradford City were up at Eccleshill two days before the World Cup Final – but a delayed start to the 2012/13 campaign, due to the Olympics, has left us with a second gap of no football.

Finally, the usual programme of friendlies gets underway at Tadcaster Albion tomorrow afternoon, and another significant landmark towards the commencement of the proper stuff will have been reached. The games then come thick and fast as ever, with City making the short trip to Ireland for two matches against Wexford Youths on Tuesday evening and Bray Wanderers on Saturday afternoon. Here we go again, again.

Pre-season schedules are always an interesting measure of a manager. It is the only time of year they get to pick the opposition and when matches kick off (remember Peter Taylor cancelling a friendly at Guiseley two years ago because he wanted a 7pm start?), and you want to believe there’s some sort of fitness and development masterplan that is going to reap rewards throughout the following nine months.

When, four years ago, City were getting easily beaten by local non-league sides and manager Stuart McCall was bringing himself on as sub, some feared it was not the most professional of approach. The opposite end of the spectrum was Taylor’s tour of Essex in 2010 which had apparently proved the catalyst for promotions with other clubs, but where the standard of the opposition looked worryingly far too weak.

Perhaps befitting the man, there is nothing particularly glamorous about Phil Parkinson’s pre-season schedule this year. Guiseley, Bury and Bradford (Park Avenue) come after and will all offer useful tests, but won’t exactly set pulses racing amongst supporters. We’ve heard numerous messages and read several articles via the Telegraph & Argus about how serious and scientific pre-season preparations have been this time. These six matches will all be about building fitness and developing understandings between new team mates.

Parkinson heads to North Yorkshire tomorrow with a group of players looking stronger in terms of quality but lighter in numbers. We can easily field a very strong first XI were the real season kicking off tomorrow, but beyond that the squad may not stand up well to the inevitable occurrence of injuries and suspensions.

A number of last season’s fringe players have been told to find new clubs, with all but Dean Overson, Dominic Rowe, Darren Stephenson and Matt Duke – officially at least – still at the club. It is likely that new back up options will be needed, which might explain rumours this week that Matt Halmshaw (ex-Macclesfield) is on trial. He may not be the only unfamiliar face present at the 2Inspire Park tomorrow, with the odd trialist as much a part of pre-season as politely applauding, rather than wildly cheering, goals.

Beyond that, Parkinson expects to give all fit first team players 45 minutes tomorrow, which means first Bantams run outs for Rory McArdle, Gary Jones,  James Meredith, Garry Thompson and Stephen Darby (fellow new signings Andrew Davies and Will Atkinson are well known, of course). With Parkinson’s search for a new striker so far drawing a blank, James Hanson and Nahki Wells get an early opportunity to convince they should remain the starting strike partnership. Personally I wouldn’t be fussed if we didn’t sign a forward this summer, and I don’t get the argument that Hanson is at the stage of his career where he needs someone to learn from – if that ‘mentor’ is simply going to take his place in the team.

Fringe players of last season still on the books will also go into pre-season with strong motivation. Ross Hannah in particular is at the crossroads of his fledgling professional career. If he doesn’t make an impression over these six friendlies, frankly it is going to be difficult to see him recovering and ‘making it’ at Valley Parade.

Pressure on for the players, but also pressure off. This week’s run of three games are all about getting into the groove and hopefully knocking in a few goals, but there is still some way to go before even the friendlies start to feel serious. For now we can just breathe a sigh of relief that the Bantams are well and truly back – from tomorrow, there will be no major gap from it for another 40 weeks.

Width of a Post will publish match reports of all three of next week’s pre-season friendlies. Though the speed of which the Wexford and Bray games are written up will depend upon our intrepid reporter’s fondness of the Guinness.

Like Loading...
‹ The Midweek Player Focus – close season special #9: Benito Carbone (00/01)
Connell arrives at Valley Parade – but where does he fit in? ›