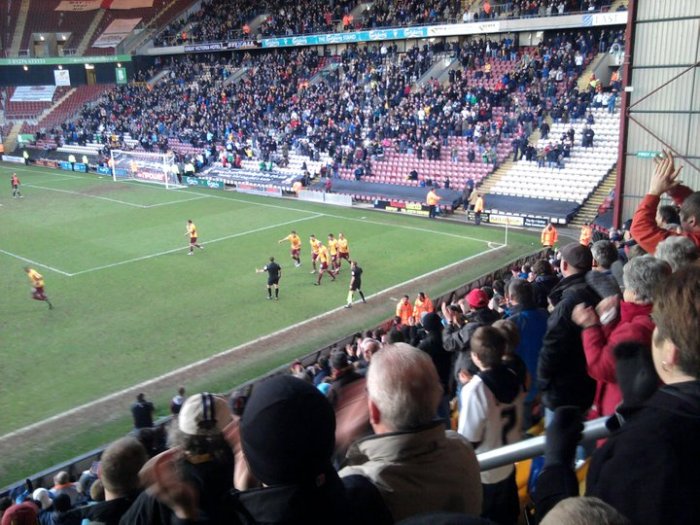 There will be little to no reaction when City fans see former left back Robbie Threlfall’s name on the team sheet tomorrow evening. It will be the certain someone ahead of him who we are looking out for.

Kevin Ellison returns to Valley Parade for the second time following his largely unsuccessful loan spell towards the end of Peter Taylor’s tenure. Last time we remember well. Coming off the bench to score a late equaliser, then angering fans with his celebration, coupled with his disappointing 12 appearances on loan in 2010, fans don’t exactly have fond memories of him to say the least. Having been left out on Saturday, could he be set for a return to the side tonight? Or does that mean he is out of favour at the moment? Either way, he will play some part, even if it is simply antagonising the fans on the sideline. Anyway, it’s not all about him, let’s move on.

Unbeaten at home, City will be expecting another win in front of the Valley Parade faithful tonight. But the opponents are unbeaten away, and are yet to concede a goal outside of the Globe Arena. They will prove stern opposition, and will be a good test for Phil Parkinson to see how his side are truly doing, after, let’s face it, two home wins against teams who will end up towards the bottom come the end of this season.

Three points here should be expected. As Jason said in the Barnet preview, a promotion chasing team should look at the home double-header and aim for 6 points from 6. Half of that is there, but Morecambe surely will not be as bad as Barnet.

They will be a much more physical side, with big men all over the pitch, as well as quality and pace out wide. Izak Reid is a player I admire, look out for him on the right hand side should he play. I expect Threlfall to pose a big threat on the left flank, no matter who is there ahead of him.

There will be a big focus on the manager’s tactics tomorrow, after he got them miserably wrong against both Rotherham and Accrington, he has some important decisions to make.

First of all, I fully expect Rory McArdle to keep his place at right back. E***son is Morecambe’s out-ball and they will look for him with the majority of passes. I just don’t think Stephen Darby has the physical presence to cope with him. It disappoints me, as McArdle has not played well (note that I have only seen the team from Rotherham onwards) in the last few games, and is definitely not a right-back, which frustrates me because you need a right back at right back if you want to pose a serious attacking threat, and a centre back does not do this. Every time McArdle gets the ball, he plays an inaccurate long diagonal pass, resulting in the loss of possession. This needs to be addressed.

With Threlfall also on the left hand side, the right midfielder will have to do a lot of defending. Whether Phil Parkinson realises this or not, is a different matter. Due to his style of play, whenever Threlfall was in the team he was forbidden to cross the half-way line, but Parkinson needs to realise him as a serious attacking threat. If he does, expect to see Will Atkinson on the right hand side of midfield. Garry Thompson is another who could do the defensive job, and I would like to see him given a chance against his former employers. If not, and Parkinson sticks with Zavon Hines, I think he will struggle to play his part to the level we know he can.

For me, however, Hines does not deserve to be dropped. A very good performance at Accrington was rewarded with him being substituted after an hour. Kyel Reid needs to be dropped for me. I have yet to see him play well this season – and that includes the three pre-season friendlies I went to. He looks lazy, unfit and arrogant. He seems to have let it get to him that he is the best player at the club, and he needs to be taught otherwise. He has rarely taken on his man, thinking he can simply stand just inside the opposition half and whip an aimless cross in. He has shot too often, and as a result looks half the player he was towards the end of last season.

Then the middle of the park. Again, Nathan Doyle is yet to impress me this season, and Ricky Ravenhill will undoubtedly be chomping at the bit to get back in the side. Ravenhill is clearly a player Parkinson likes, and with Doyle still not being at full fitness yet, he could find himself starting tonight.

But, while I am typing this, the thought occurs to me that Doyle could play right back. He is known in these parts as a right back, and won’t exactly be a push-over for the man he would be against. If Parkinson feels the same as me about McArdle, then that could be a possibility, and now I think about it, why couldn’t it happen?

Hopefully we will see some continuity with Alan Connell keeping his place up front alongside James Hanson – despite that horrendous first half miss – as I feel he is key to our link up play, and keeping the ball in the opposition half. Nahki Wells was poor at Rotherham and didn’t look too cracky in his short appearance against Barnet, so he shouldn’t just walk back into the team when fit.

Three points is the order of the day, but a performance better than the one against Barnet would be the bare minimum we could expect. We need to take something down to Oxford, as that is sure to be a very tough game.