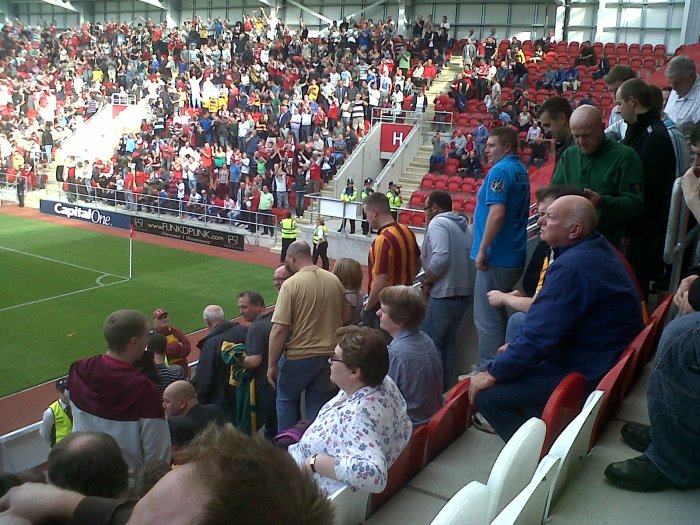 City travel to Rochdale tonight probably looking to settle a few scores. After Saturday’s unjust defeat to Port Vale, we will also be hoping that lady luck shines on us a little bit more.

The game is somewhat of a local affair and City are expected to take a large following across the border as we normally do for this fixture. The fact that Rochdale have refused to send any advanced tickets over to the Bantams ticket office for away supporters has raised some consternation around BD8. Many readers will recall the somewhat “farcical” scenes that developed surrounding our last but one league trip to Spotland in 2009.

At the risk of going over old ground, there were numerous factors three and half years ago that have meant that Dale’s decision has been met with raised eyebrows at City. In particular, there was the struggle to get into the ground caused by a noticeable shortage of open turnstiles, followed by the failure of City supporters to be able to find seats which resulted in others being refused entry, and then finally, the arguments that followed the game over the “Official declared attendance”.

That game was a top-of the table affair with both sides pushing for a play off place. It actually signalled the beginning of a terrible run of away form that would ultimately cost the Bantams any chance of promotion. We lost 3-0 that day (one Rory McArdle opening the scoring) and, barring Frank Fielding’s brilliant save to deny a Peter Thorne one on one opportunity, it is hard to argue that the result wasn’t a fair one, despite referee Scott Mathieson’s award of two debateable penalties to the home side.

That Rochdale team managed by Keith Hill were one of the best that I have seen at this level and, although they missed out on promotion via the play offs that year, they were of course promoted automatically the year after, when many will remember them tearing us apart at Valley Parade.

There are a few ex-Rochdale players in and around the City team at the moment and I am sure that the likes of Will Atkinson, McArdle and in particular Gary Jones will go back over the Pennines looking to put on a decent performance. Atkinson is starting to change the opinion of City supporters with some improved performances this season and, although Jones doesn’t have to win over any of the Rochdale Faithful, he may well feel that he has somewhat of a point to prove to their manager John Coleman.

Jones has been described as Dale’s greatest ever player and had a fantastic relationship with the supporters during his two spells with the club where he spent a lengthy time as captain. However, it was Coleman’s desire to put his own stamp on things that saw the player released during the summer and City have so far reaped the benefits. We must all hope that we continue to do that in this fixture as Jones’ importance to our team has so far proved immeasurable.

Coleman himself has his own eventful history with City. Twice the Scouser has been linked with the hotseat at VP after the masterclass in lower league management that he continued to exhibit at Accrington Stanley. His fiery temperament on the touchline during games has also seen the banter flying in his direction from the stands. All that of course goes without mentioning the fact that he had a very successful record against us during his time in East Lancashire. City will be hoping that they can set the record straight on this score too.

Whilst we could be described as having a team full of ex-Rochdale players, Dale can also be seen to have a team littered with ex Stanley personnel. Besides Coleman and his loyal Assistant Jimmy Bell, the squad contains no less than six former Stanley players as the manager attempts to go with what he knows and build the same kind of togetherness and team spirit that were the bedrock of his success in Accrington. One of these players in particular is youngster Bobby Grant who Coleman convinced to join him at the end of the transfer window despite the striker having had a decent start to the season at Scunthorpe in the division above. He scored and was extremely threatening during Dale’s impressive win at pacesetters Gillingham on Saturday, and his partnership with the experienced former City striker Dele Adebola is sure to keep the likes of Luke Oliver, Andrew Davies and McArdle on their toes.

City, barring fitness and tiredness issues, will no doubt go with a similar side to the one that was so unfortunate on Saturday. Atkinson has performed well in away games this season and I can’t see Zavon Hines being brought back into the team for this game, after playing both him and Kyel Reid was seen as being our downfall in the Rotherham away game four and a half weeks ago. The only change that we may see could be the restoration of Alan Connell to the stating line up, as his ability to drop deep and hold the ball up has proved useful against decent opposition so far this season. That decision would however be harsh on Nahki Wells, who has scored three in three and was arguably City’s biggest threat against Vale.

Whilst City’s start to the season could be described as being impressive if not spectacular and also somewhat unlucky at times, Rochdale’s has been patient and progressive. After the first couple of games which followed relegation last year, certain sections of their support were starting to tire of the new regime. However, three wins out of four and taking ten points from a possible twelve has seen them surge up to within just a point and a place of City.

Although the season is still in such an early stage this fixture looks like being a cracker for so many reasons. Let’s hope that City can use it to get back on track and to straighten a few things out.