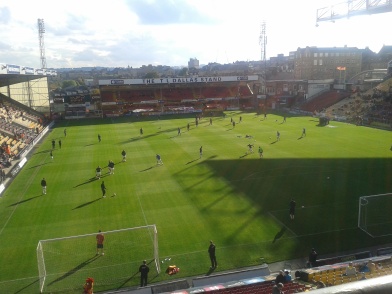 It was strange looking at the fixture lists this week to see that City had no midweek game. We have become accustomed to playing on Tuesday nights over the last month or so. In fact it is over a month since City didn’t play two games in a week and the last free Tuesday that the squad had was way back on 16th October.

It is no wonder therefore that Phil Parkinson said in his post match interview after the Bristol Rovers draw last weekend that he planned on giving the players a few days off. Not surprising in the slightest, given that over the traditionally busy DecemberCity go back to playing twice a week again and will actually play as many as TEN games between this Friday and the away fixture against Barnet on 5th January.

City appear to have paid the price for their own successes over the season so far as we have been the only team in the country still battling on all four domestic fronts. I don’t know the exact figures, but I’m sure that if you totalled up the number of minutes played by each team in League Two, City would come out comfortably on top, not least due to the occasions when we have been forced to go into Extra Time in order to ensure our passage through into the next round of a cup competition.

Indeed, the injuries that were picked up a couple of weeks ago in the Cup Replay against NorthamptonTown by James Meredith and Stephen Darby were put down simply to fatigue. Fortunately both were only out short term and a little rest seemed to do the trick. I’m sure that PP will be hoping that the luxury of going six days without a game will have allowed players in a similar position to rest any niggles or aching limbs.

One result that I’m confident that nobody involved with City will be hoping for on Friday night is a draw. This would lead to a replay and therefore another game for City to cram in before that Barnet game on 5th January. That 5th January date by the way is the one that will be used for an FA Cup 3rd round game should City triumph in tonight’s second round fixture.

This therefore leads us back onto a discussion about the clubs priorities. Most people are agreed that the league has to be our main concern this season. However, with three out of next four fixtures being in the cup competitions we can be forgiven for asking ourselves which is the most important.

After playing Brentford, we go on to play Port Vale away in the Johnstone’s Paint Trophy on Tuesday night, then we have Torquay in a league game on the Saturday before the game that everyone is trying not to talk about against Arsenal the following Tuesday. Out of the three Cup games, I’d stick my neck out and say that from the club’s point of view, this game against Brentford might just be the most important.

Although supporters are all buzzing about the Arsenal game (no doubt the players are too), and a cup upset would be magical, we have to be realistic and realise that the odds are stacked against us and we are likely to bow out of that competition. The Port Vale game is the one that is the least glamorous, both for the fans and for the club, not least because of the lack of financial gain from the competition and the further fixture backlog that a win would create.  The Brentford game, however, is the second round of the FA Cup and a win would put us into the third round draw with the chance of coming away with another lucrative tie for the club similar to the Arsenal one.

City go into Friday’s fixture having only lost one game in our last eight, whilst Brentford are in similarly good form having only lost one of their last nine games. They haven’t tasted defeat since their game away to Doncaster back on 20 October. They sit in fifth place in League One and triumphed over promotion rivals Sheffield United last time out.

Managed by the astute German and former Manchester City Centre Forward Uwe Rosler, they boast an impressive squad which includes one time City Target and Bradford-born Clayton Donaldson. He is currently the Bees top goalscorer. Other players to watch out for include former City loanee Tom Adeyemi and ex-Leeds midfielder Jonathan Douglas.

City go into the game without long term absentees Luke Oliver, Andrew Davies, Kyel Reid and Zavon Hines, although we are lead to believe that Reid and Hines are well on the road to recovery and should be available sooner rather than later. We are also boosted by the news that loanees Blair Turgott and Curtis Good are available to play in cup competitions.

Whatever team Parkinson picks will face a tough task against higher division opposition, but as so often seems to be the case this season, the potential rewards could be mouth-watering. It is up the players and coaching staff to get the most out of themselves over the next month or so in order to ensure that City go into the new year in the best possible position.

Like Loading...
‹ City Gent 182 on sale tonight
Not what we wanted as City comeback to earn replay ›