Home › Previews › Wycombe vs City preview part one: a Bradfordian in Wycombe

Wycombe vs City preview part one: a Bradfordian in Wycombe 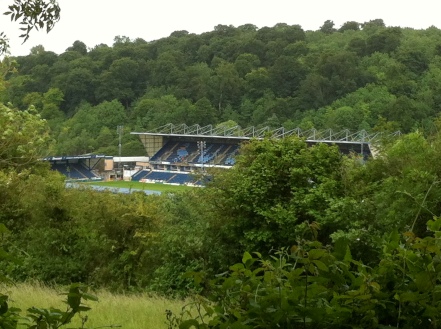 I’m Bradford born and bred but High Wycombe resident since 2001. I guess City fans have no trouble recalling that fateful year. As for Wycombe, they were playing in an FA Cup semi-final against Liverpool and on their way to becoming the longest serving club in League One (or Division Three if you’re of a certain age).

I watched City regularly from about 1976 to 1992, first hooked by, yes, a cup quarter final, that one against Southampton, and great entertainers like Don Hutchins and Joe Cooke. Season ticket most years, saw them on 50+ grounds, ‘82 to ‘88 especially being a great period for the club, Bantam Progressivism and all that. But kids came along and the iconic view up Wakefield Road from the Kop became more interesting than the teams of Stapleton and Doherty – remember Torpey, Tracey and Morgan and other forgettable signings (Alan Dowson anyone?) – so life and location moved on with City very much in the background.

Now I only occasionally watch City but always try to catch this fixture, some good City performances but three straight recent defeats; last time out not helped by Tommy Doherty’s sending off. By the way, Doherty really was a talented player at Wycombe, but with an awful disciplinary record. So I’ve seen more of Wycombe, lovely ground 10 minutes from home, a really nice place to watch football, especially from the Family Stand along the far side of the ground, where wife and son will sit on Saturday. The view from the away end (where of course I will be) beyond the ground is excellent if you’re into rolling hills, although I guess you’d go to Ilkley Moor for that rather than drive 200 miles to Wycombe.

Sadly, I rarely find Wycombe entertaining and moving away from the home turf and trying to support another team…well it just don’t work! You can take the man out of Bradford…

And as for the view, I prefer the main stand at Grimsby.

In recent years, Wycombe have been something of a yo-yo club within the bottom two flights. They occasionally talk about the Championship but never with any conviction. Doesn’t strike me as a footballing town, even less a rugby town, despite being the home of Wasps over the last few years. There was a long campaign for a new shared ground, uproar from a few nimbys and, when all the fuss was over, the owner of both disappeared into the sunset. For new shared ground with Wasps, just read Odsal as the Wembley of the North.

Two things strike me about Wycombe, maybe common to lots of lower flight teams. First, the changes of playing personnel are so frequent that they seem to have an almost completely different team one year to the next. Second, they have unearthed some really excellent players, but as soon as there is any sniff of a transfer fee, they are on their way. Roger Johnson, Mike Williamson, Russell Martin, Nathan Tyson, Jermaine Easter, Matt Phillips, Stuart Beavon. Nahki Wells would not be a Wycombe player beyond the next transfer deadline! My favourite Wycombe players of those last eleven years; Tommy Mooney, a Campbellesque crowd pleaser and Darren Currie, really talented midfielder who fell out with Tony Adams, who briefly thought he was a football manager.

As Wycombe are in excellent recent league form (4 wins in 6), the omens are not great for City. New manager Gareth Ainsworth has made an excellent start, pulling them off of the bottom of the table. And if Phil Parkinson is not too welcome to Adams Park, it may just be his Colchester connection. For some reason (recent non-league history I think), they are Wycombe’s arch rivals and one of only two opponents ever attracting the attention of the boys in blue in these parts, the other being Oxford. And don’t try playing the League Cup semi-final card too loudly. I watched Wycombe, I think as a bottom flight team, draw the first leg of a League Cup semi final a few years ago against Chelsea, before being hammered in the away leg.

If you’re going to the game, the parking at the ground is awful (there’s only one road in and out of it) and there’s only one pub remotely close to the ground (Hour Glass). You can just about park and take a somewhat long walk from the White Horse on the main A40 road between Wycombe and the ground, well known for its adult entertainment (not that I’ve ever sampled it, you understand) and a very early UK Kings of Leon gig!

If you’re earlier, the Town Centre is worth a visit, especially if you’re a Bradford Councillor and you want to see a decent job of revitalising a City (for big fenced off hole in the centre of Bradford, read Eden Shopping Centre, High Wycombe).  There’ll be no problems for visiting fans. The local woods were fenced off for weeks a few years ago, part of the search for Bin Laden or some other terrorist related activity…and Wycombe had its very own ‘Asians groom young white girl’ scandal recently…but it’s a harmless place.

Home from home for a Bradfordian.

Like Loading...
‹ The tie which did not matter
Wycombe vs City preview part two: Oh what fun it is to see the City win away! ›