Aston Villa vs Bradford City build up: What this means (part two) 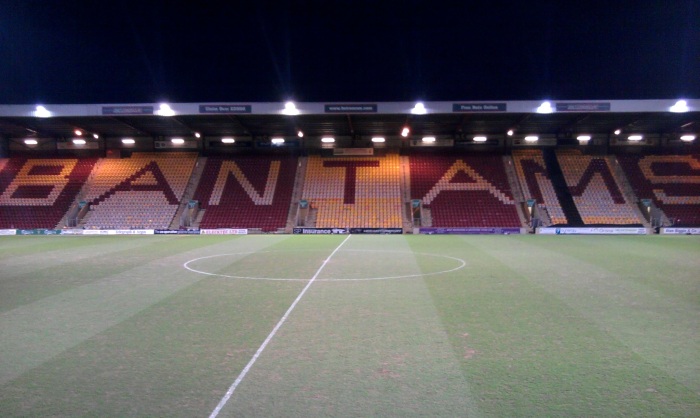 Following teenager Joe Cockburn’s article about what this League Cup semi final signifies to him, a member of the older generation, David Pendleton, who is BantamsPast curator, author of two Bradford City books and a former editor of The City Gent, puts this occasion into the perspective of four decades following the Bantams.

It’s astonishing to think that I have been a regular at Valley Parade for 42 years (is this where I add the rider that I was very young when I first pushed my way through the turnstiles and into Valley Parade?) My first experience of Bradford City in 1971 was both vastly different to today and yet remarkably similar. The gallows humour of the fans, the claret and amber colours and, sadly, the fourth division are exactly as I first met them. The changes are the staggering transformation of Valley Parade and the supporters’ expectations. That can be summed up by stating that in 1971 Bradford City’s status was defined by the fact that we were former FA Cup winners (albeit some sixty years previously), today City are shaped by the fact that we are a former Premier League club.

That shift partly reflects the diminished status of the cup competitions in the inexorable rise of the Premier League (and the pots of money membership of that gilded cage brings), but it also is the fact that we were a top flight club only a decade ago. Of course, that is no succour to a teenage City fan, but for supporters of my generation, a decade is fairly recent by comparison.

Comparing matches and memories is riddled with pitfalls. Just where does the coming match at Villa Park stand in the great pecking order of claret and amber memories? Partly that will be answered by the result, but I’ll attempt to put the match into a personal perspective.

My first big Bradford City occasion was undoubtedly the FA Cup quarter final against Southampton in 1976. I had never witnessed the Bantamopolis (otherwise known as Valley Parade) being besieged by the national media. City were rattling around the lower reaches of the fourth division when they set off on the remarkable cup run. I was too young to travel to the great cup night at first division Norwich, when the Bantams (or Paraders as they were known back then) dispatched John Bond’s highly rated side at Carrow Road. It was a stunning achievement and one that stands the test of time and context with the current cup heroics. However, City have beaten three Premier League sides thus far, which, in my view, puts 2013 on a different level.

So where next in the memory bank? League Cup quarter finals of the late 1980s? To be honest they don’t compare. Partly because back then we had such a great side that we almost expected to make progress in the cups. There were undoubtedly some great ties en route, but both quarter finals ended in disappointment against opposition that, frankly, we should have beaten. I think we have to come out of the cups and examine the league form to find fitting comparisons. The charge from bankruptcy, the terrible fire and its overhang and then the nearly season of 1988 made that decade one of the most astonishing in my City supporting life. McCall, Hendrie, Campbell et al. The memorable matches are almost ten-a-penny.

The return to, what is now, the Championship was a watershed moment for the club after half a century in the lower divisions. To endure the fire and then come within one measly point of promotion to the top flight was an achievement that is probably unmatchable in the club’s modern history. Apart from a terrible refereeing performance at Maine Road, who ultimately snatched promotion from our grasp? Aston Villa. A huge moment of that season was a narrow one goal defeat at a packed Villa Park. City took around 10,000 fans to that match (the biggest away support I have witnessed aside from Wembley 96). I heard John Hendrie talking of laying the demons of that season with victory in the 2013 semi final and I think he is right.

The memories blur by: Wembley 1996; Chris Waddle’s wonder goal at Everton in the FA Cup; the unbelievably tense night against Charlton in 1997 when City gave themselves every chance of remaining in the Championship; Wolves in 1999 and promotion to the Premier League; David Wetherall and that header against Liverpool 2000; the demolition of Chelsea in 2000/01; Blackpool play-off semi-final 1996.

There you are, I left it until last. The most unlikely, wonderful, mad night I have ever known supporting Bradford City. Blackpool away: 2-0 down after the first leg at Valley Parade; the Tangerines’ programme notes giving Wembley travel details; Chris Kamara waving like a demented thing at the away support before kick off; Carl Shutt’s early goal; the equaliser that had us dreaming; and then the mad scenes when the winning goal was side-footed in by Des Hamilton. Yes, promotion to the Premier League three years later put us back in the top flight after 77 years, but for sheer adrenaline pumping lunacy (and isn’t that what football is all about?), Bloomfield Road on that insane night in 1996 was THE match for me and it still is.

Having said all that, as the goals rained in against Villa at a rocking Valley Parade (and City put themselves within an ace of a major cup final) it was hard not to think that here was another of those defining moments. For those under twenty-five it might have even been THE night – better than Arsenal? I think so, given the margin of victory and the potential significance of the lead City take to the other VP.

It’s said that comparisons are odious and that is undoubtedly true. How can we measure Blackpool 96 against Wolves 99; Wembley 96 against Liverpool 2000?

What really matters is that Bradford City 2012/13 have given the supporters a whole new clutch of memories. We have nights to treasure once more. We know that another big performance will see City walking out at Wembley in front of 90,000 fans.