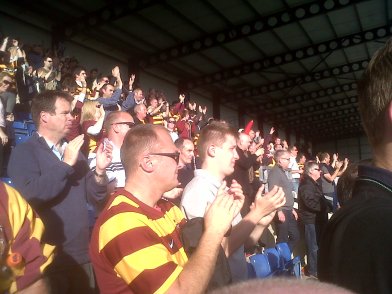 It is the days just before you go on holiday where your job especially becomes a drag. And with Bradford City just over a fortnight away from walking about Wembley for one of the biggest games in its history, the three League Two matches coming up this week present a mental challenge for the players. Get past Gillingham tomorrow, plus trips to Wycombe and Wimbledon, and we can start to fully enjoy the big occasion. But it’s not time to turn on your out of office message just yet.

For the Bantams, these three games could be crucial. Having fallen behind the pace-setters during January, the need for a first league victory since Boxing Day is huge. A visit from Gillingham – second in the table – is hardly the ideal opposition. Especially as the Gills are proving to be excellent travellers, having lost only once on the road – a record only Manchester City can match in the four divisions. Yet it’s almost a decade since Gillingham – frequent guests to Valley Parade in recent years – triumphed in this corner of West Yorkshire. A morale-boosting three points has to be the target.

Morale being a key word after a fortnight that has not quite gone to plan, both on and off the field. Last Saturday’s 2-2 draw at Fleetwood Town looked a good point in isolation, but in the context of four winless league encounters before it, the surrendering of a 2-1 advantage felt very much like two points – and an opportunity – lost. And just as City were still counting the pounds of the League Cup windfall, FIFA’s bolt from the blue over Mark Stewart’s transfer fee owed to Falkirk means we should be even more grateful that Villa said no to the club’s unusual offer.

Perhaps more significant is the future of Phil Parkinson, whose contract talks are said to have slowed and are unlikely to re-commence until after Wembley. Width of a Post understands that the two parties are not yet on the same page in regards to personal terms, and the manager is also keen to iron out one or two other issues before putting pen to paper. It’s to be hoped an agreement can be made.

In the meantime City remain vulnerable to losing the man who has turned around the club’s fortunes since taking over in early September 2011. Blackpool may have been rebuffed by Parkinson – a decision which apparently left Tangerines’ chairman Karl Oyston perplexed – but if in two weeks City once again impress on the big stage, the manager’s stock will only rise further.

So an interesting time for the club to say the least. A growing sense of discontent can be heard amongst some City supporters following the poor league form of late, and it would be fantastic to collect a good points’ haul over the next three games, in order to fully enjoy the Wembley experience. Promotion won’t be won during the next few days, but a bad week could severely damage our chances.

The Fleetwood draw might have felt disappointing as we filed out of Highbury, but there were undoubtedly positives to take back from the seaside which can be applied in this game. The biggest for me was the superb performance of Gary Jones. So influential, such a talisman; the City skipper was back to his best. Against both Villa away and Fleetwood, Jones has not only led by example but ensured the players around him have lifted their game too. That is what good captains do (take a bow Stuart McCall and David Wetherall), they make others play better. We love you, Gary.

Jones will line up tomorrow alongside Nathan Doyle, who has been quiet of late by his own high standards, with Will Atkinson and either Garry Thompson or Zavon Hines on the wings. Probably the latter, as more pace is needed in home games especially. Kyel Reid did well as substitute on Saturday, but has fallen down the pecking order for the moment. Blair Turgott, who played for England Under 19s midweek, saw his loan spell extended midweek. I like what I have seen of the West Ham winger, but we haven’t seen a lot of him so far.

Up front James Hanson and Nahki Wells linked up excellently at Highbury, and the Bermudian’s declaration of fitness means they should continue tomorrow. It was curious to see Andy Gray brought on as substitute ahead of Alan Connell. Just when Connell was playing some of his best football of the season, he has seemingly been relegated from third choice forward to fourth. After his complaints about being super sub at Swindon last season, he can’t be happy with the current state of affairs.

At the back Matt Duke keeps goal behind Stephen Darby, Michael Nelson, Carl McHugh (who made his debut for Ireland Under 21s midweek) and, probably, Ryan Dickson. It almost went past without comment that the penalty City conceded at Fleetwood was the result of Dickson giving away a free kick following a poor challenge that he didn’t need to make. Dickson’s goal was welcome and he does look good going forward, but it will personally take me a little bit longer to forgive him for pulling out of tackles at Crewe in the JPT.

Gillingham rock up to Valley Parade after a difficult week that saw them lose at home to Wycombe on Sky on Monday evening, in a match that was overshadowed by a Gills’ fan attacking the visiting goalkeeper. That superb away record hasn’t been tested for over a month, with a couple of postponements meaning they have played four home matches in a row.

Their one away defeat so far was at 4th-placed Burton. But they have beaten five of their fellow top eight sides on their own patch so far. Expect a tough, tough afternoon.

Yet you have to go back to 2009/10 for the last season that Bradford City lost three consecutive home league matches, and, this time around, only four sides have won more homes games than the Bantams’ eight Valley Parade victories so far. There is plenty to fear about Gillingham tomorrow, but also plenty for Gillingham to fear about us.

Like Loading...
‹ FIFA rules against Bradford City on Mark Stewart
Gills preview 2: Time to get some league points on the board, but it won’t be easy ›