Home › Previews › Should I stay (home) or should I go?

Should I stay (home) or should I go? 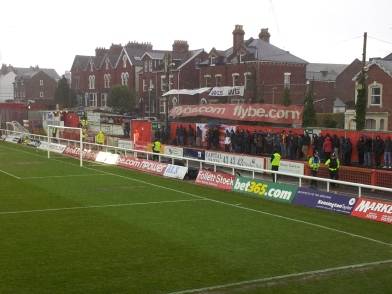 In the aftermath of last Saturday’s very disappointing 4-1 defeat at Exeter, there has been the expected outpouring of frustration as to how this season is panning out. Even the most optimistic fans finally conceding that the wheels have finally fallen off a play off push, and thoughts of a second visit to Wembley extinguished.

With a further nine matches of the season left, post mortems seem to have be the order of the day (and indeed seem to have been carried out on a still very much alive patient, for a number of matches previously), and debates range from the impact of the League Cup run on City’s League Two campaign, the need for new strikers, goals from midfield, squad rotation etc etc.

Indeed the ‘experts’ in our fanbase seemingly delight in telling us where Phil Parkinson has got it wrong, which players who are not “up to it” or a “disgrace” and so forth. Over the last few weeks you can hardly move for the number of towels that have been thrown in along the way. The management and players of the club are no doubt baffled by the fickle and fragile nature of the fanbase. And this may still prove to have more far reaching consequences given the approaching renewal of a number of management and player contracts, and the associated ability to build upon a solid platform going forwards.

Whilst frustration with the season is inevitable, it is important that we react constructively to the current adversity and avoid implosion. After the past 12 seasons of decline, this season, certainly for me, represents a massive turnaround, albeit in many ways that would not have been expected at the start of the season.

Again, despite what has become a tendency to not be able to capitalise on our superiority in spells of games, which has led to too many draws or defeats, I can’t think of many games where I have been disappointed in the efforts or commitment of the players or the overall performances. City have generally looked solid with a controlled aggression, create chances and have good periods of domination and certainly are not a million miles away from being a very successful side.

This time last year City found themselves marooned in 18th place in League Two, having amassed 39 points from 36 matches. The 51 points currently gained from 37 games represents genuine progress, and a further sobering thought is that Accrington Stanley, currently bottom of the table with 40 points after 38 matches, share the same points tally City managed after that number of games last season.

Which brings things on to Tuesday’s re-arranged visit of Wycombe to Valley Parade, initially scheduled for the end of January. City’s re-scheduled match in the corresponding away fixture in February, looked a tricky game against Wycombe, who were then the division’s form team, but following a convincing 3-0 victory, it looked like City had re-kindled their own league form and could kick on accordingly. Sadly we have been unable to string wins together since then; the five match unbeaten run recently ended, being hampered by too many draws.

Since the match against the Bantams, Wycombe have had a sequence that has seen them win two and draw one of their last six matches. The seven points gained leaving them in 15th place in the league. Last Saturday saw the Chairboys’ match against Northampton postponed due to a waterlogged playing surface at Adams Park. Having hit the bottom of the table earlier this season, the Blues will be keen to maintain a positive climb up the league, which has all but cemented survival.

Wycombe have a number of players ruled out for the rest of the season (Anthony Stewart, Matt Bloomfield, Danny Foster and Grant Basey) but have recently welcomed back centre back Gary Doherty; and striker Matt McClure has recovered from a foot injury sustained in the recent 2-2 home draw against Rotherham. Player-manager Gareth Ainsworth may again start on the bench.

City themselves have also taken seven points from the games following the fixture at Adams Park, albeit having played an extra match. And, in 12th place, are just two points ahead of the Chairboys. The Bantams failure to get early goals of late has been costly, and interestingly the Wycombe away fixture was the last time a first half goal was scored, notably Nathan Doyle’s first minute strike.

Given the recent comments regarding player fatigue, Phil Parkinson will no doubt shuffle the pack yet again and line-ups remain difficult to predict. The much-heralded inclusion of Alan Connell in the starting line-up at Exeter meant a changed formation, and whether this worked or not, will no doubt be answered to a degree by the side fielded on Tuesday night.

Following the second half attacking performance last Saturday, I would expect Connell to return to the bench again, with wingers permed from Zavon Hines, Kyel Reid and Will Atkinson. Despite the substitution of Garry Thompson at the weekend, his recent form would suggest another start alongside James Hanson, with Nahki Wells perhaps more effective as an impact substitution, as he seeks to return to his earlier goal scoring form.

Rory McArdle could rotate with either Andrew Davies or Michael Nelson, and James Meredith makes a welcome return to the side following recovery from his bout of glandular fever, which is likely to see Carl McHugh give way.

Given Matt Duke’s below par performance on Saturday, there is a call to be made in the goalkeeper position. Whether Parkinson sticks with the keeper who has not let City down whatsoever this season, or brings Jon McLaughlin back, remains to be seen. The completely unnecessary and hysterical calls for the return of McLaughlin during Saturday’s match speaking volumes about a number of so-called supporters last weekend.

So, no doubt in what many will now perceive to be a meaningless end of season fixture for both sides, we will see a number of supporters stay away, and the potential for a subdued atmosphere in the first of three consecutive home matches. Whilst the Wembley flags have now been put away, let’s hope those attending continue to positively support the team for the remainder of this season. Not only could such type of support have a longer reaching impact on next season, it will hopefully help us to finally chalk up a much-needed first home win of the year.