On-off play-offs well and truly back on 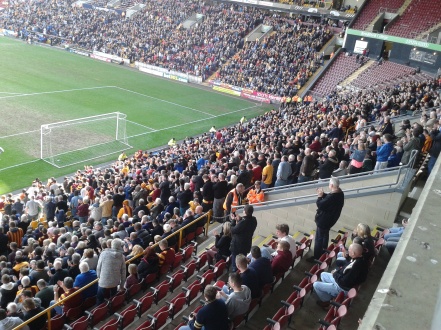 In the final home match of the 2012/13 campaign, Bradford City managed to secure a play off place – a feat which has eluded them until now, in this,the sixth season of residence in League Two. Indeed, the only previous play-off activity goes back to 1988 and 1996, thus representing somewhat uncharted territory for many.

Yes, do not adjust your sets. Following today’s 1-0 win, City will take part in the first round of the League Two play offs, scheduled for Thursday 2 and Sunday 5 May.

When offering to write this match report, back at the end of March, WOAP editor Jason McKeown remarked that he hoped I wouldn’t be “writing about a Burton promotion party”. How things have changed! Whilst many euphoric fans celebrate tonight, there will no doubt be a few slices of humble pie accompanying some celebrations. Write this Bradford City side off at your peril. Burton themselves have wobbled greatly over the last few weeks, including a 7-1 mauling at Port Vale, and previous genuine hopes of an automatic promotion spot are now seemingly extinguished.

The Bantams two previous matches against Burton this season have had something of a pivotal or significant feel to them.

The League cup match last September, now almost mirrors City’s season – bright start, failure to capitalise on pressure, facing an upward struggle following conceding two goals against the run of play, but eventually turning things around to 3-2 after extra-time, and the subsequent march to Wembley.

The 1-0 reverse in the league fixture at Burton in October saw serious injuries to Andrew Davies and Luke Oliver, which threatened to derail the campaign, compounded by the harsh sending off of Ricky Ravenhill in the first half for violent conduct after a clash with Lee Bell, who had fallen to the ground. Bell’s subsequent Twitter comments, where he admitted he had somewhat milked the moment, didn’t endear him to may City fans, and were to come back to haunt him in a spectacular manner.

Pre-match activities, on what was a remarkably glorious sunny day, saw an excellent Bantamspast trip around historically significant spots in the city centre led by Glyn Watkins and David Pendleton, which included retracing the journey taken by the 1911 FA side from the station to the Midland hotel and culminated in Mark Lawn pulling a pint in the Sparrow Bier Café to launch the inaugural Bantams’ History Week.

At the ground the traditional anniversary minute’s silence for the fire victims was observed in the usual fitting manner by all fans and players alike within the crowd of 13,235.

City made one change from the previous match against Rotherham, with Michael Nelson drafted in to replace Andrew Davies, who is still nursing a calf/back injury. More welcome news was the return to the side of James Meredith, who had recovered from the hip injury that saw him substituted during the Rotherham match, adding much-needed balance to the left side.

Burton made a couple of changes to their line-up, restoring Calvin Zola to the side, following injury, and brought in Matt Paterson to partner him. Ex-Bantam Michael Symes and Billy Kee consequentially dropped to the bench.

City began the match positively, enjoying a good amount of the play without carving out any real opportunities. Disappointingly, Kyel Reid saw his afternoon cut short on 18 minutes, an injury, perhaps a recurrence of his recent problems, causing him to be replaced by Zavon Hines. Despite Burton not offering the muscle or directness seen in City’s recent match against Rotherham, the pattern continued and the Bantams failed to make any serious in-roads.

However, with half time approaching a ball knocked forward was latched onto by Nahki Wells, and whilst the initial effort was thwarted in a haphazard manner by goalkeeper Lyness and defender Holness, James Hanson was on hand to hook the ball into the net for his 13th goal of the season. An element of fortune to the goal perhaps, but it resulted in no small part to the persistence of both Hanson and Wells, and more importantly was a crucial first half goal.

Matters rapidly got worse for Burton. A challenge on Hines by the aforementioned Lee Bell saw the Burton captain dismissed with a straight red card for an apparent elbow on the City winger. The irony of the dismissal was not lost on many, but more critically represented a hammer blow to Burton’s hopes of a revival.

The second half largely saw much of the same, and for a period it looked like City’s inability to capitalise on their numerical advantage might come back to haunt them. Again, despite much possession City couldn’t create many gilt edged chances, and Phil Parkinson shuffled things, bringing on Alan Connell for Nahki Wells on 68 minutes, followed by the replacement of Garry Thompson by Will Atkinson 10 minutes later. But this didn’t result in any notable differences.

The best chance of the half, late on, saw Hines played in, but his disappointing shot went well wide and capped off a frustrating afternoon for him in which he never really seemed to ‘click’. Which also underlined the importance of a fully fit Kyel Reid.

Ultimately, the game itself was an curious one, nobody really had a particularly bad game and indeed many players had good games including Gary Jones, Michael Nelson, Stephen Darby, James Hanson and Jonny McLaughlin. But there was perhaps a nervousness across the whole side given the importance of the fixture, and certainly the fluency seen in the recent home game against Bristol Rovers didn’t emerge, nor did the extra man really seem to count.

Furthermore, as the half wore on, fears of a late Burton equaliser persisted. With the recent memories of the injury time Chesterfield equaliser fresh, the five minutes of injury time was not overly welcomed. City managed to see things out, however, and with news of Exeter’s defeat by Cheltenham, the traditional last home match of the season lap of honour finally had some significance. The players were jubilantly cheered off the field and a pitch invasion was, thankfully, absent.

It is worth highlighting that the atmosphere within the ground was again excellent, and in particular the chants in the last 10 minutes or so certainly seemed to help pull the City team over the line. It demonstrates the benefits that can be generated from a ‘positive’ 13k+ crowd.

So on to the final match of the season, in which the Bantams visit Cheltenham. Whilst the match certainly has more importance to the home side, who still harbour hopes of an automatic promotion place, the outcome will certainly have a bearing on City’s play off opponents, and there are various permutations from any of Rotherham, Burton, Northampton and Cheltenham themselves.

At the moment though, who cares? It is just fantastic to finally be involved in the end of the season play offs, in what now can finally be declared a truly amazing season. The fact that the play off place is now guaranteed will allow Parkinson some options regarding the side he puts out against Cheltenham, and perhaps buy some much needed time regarding nursing Andrew Davies and Kyel Reid back to full fitness.

In a season that continues to keep giving, and one in which pride in being a City supporter has been well and truly restored, let’s look forward to a final chapter in the hope it will deliver the holy grail of promotion.

Like Loading...
‹ Who will be player of the season?
Embrace this – Bradford City are in the play offs ›