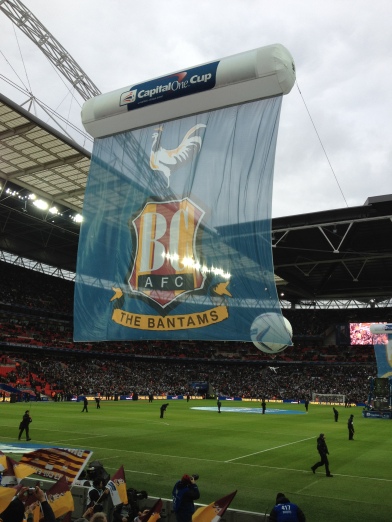 And there’s also the possibility of penalties.

Either way it’s one afternoon.

One afternoon between another year in League Two or a move up to League One.

To a promotion party.

Or the devastation of a second Wembley defeat.

No half measures, no in-betweens.

It’s all on the line.

We know the history, you can still see the bruises.

Season upon season of feeling underwhelmed.

Of set backs, of failures.

This time, please let it be different.

We can trust in this group of players.

They get what it means to us.

They get what it means to themselves.

An outstanding group of individuals that blend together so well.

Win and we go forward together.

Lose and some may go their separate way.

League Two players, but together they can become League One.

One afternoon to change everything.

May is a month of winners.

We see it every year.

Not, sadly, with our own eyes.

But through the lens of others.

Watch their players dance about on your TV screen, read about their fans going crazy in the paper.

Always someone else’s party, never ours.

When the Sky cameras zoom in on tomorrow’s winners, let it be us.

Let it be Gary Jones and Ricky Ravenhill jointly holding the trophy up.

Let it be our smiling faces that are beamed into pubs and homes all over the country.

Let it be Phil Parkinson punching the air.

May is also a month of losers.

For every team who triumphs, another is slumped on the floor.

Climb up those steps to collect a loser’s medal.

Parkinson will have the players fully prepared tomorrow.

Giving it everything they have is a minimum.

What is the role of us supporters?

Giving it everything that we have is a minimum.

From the first minute to the last, no need for silence.

No need for muttering.

No need for moaning.

We need to sing, and we don’t need to stop.

From the first whistle to the final kick, a wall of noise.

We’ve paid to be here, but we’re part of the event too.

The noise we make, it must be deafening and relentless.

Anything else is a half measure.

City till I die, that’s a given.

Whatever happens tomorrow, we’ll be cheering them next season.

But to come this close…well, we can’t let this opportunity slip us by.

That history of underachievement tells us it won’t be so easy to earn this chance again.

One afternoon away, from Bradford City’s world changing.