Home › Match Reviews › When there is nothing else to give

When there is nothing else to give 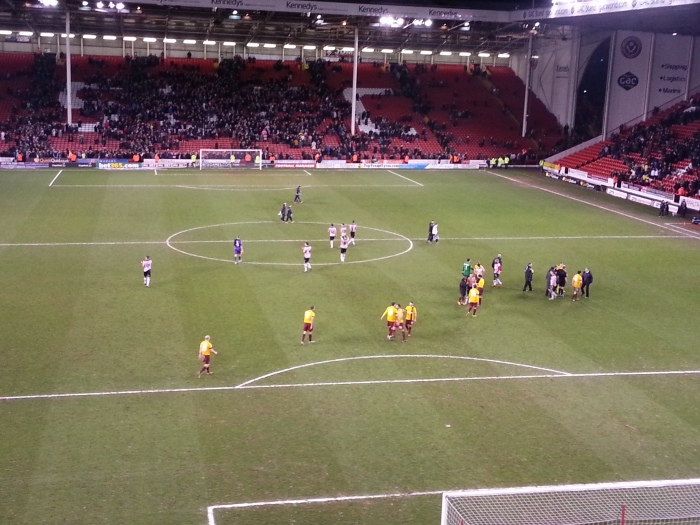 Stripped bare of confidence, enthusiasm and even dignity – there was at least one admirable quality that a forlorn-looking Bradford City side refused to surrender at half time: their spirit.

That spirit, one which led the Bantams to Wembley, twice, remained under the bonnet when it seemed there was nothing else left. That spirit, one which has taken the club from peering over the trapdoor of non-league football to League One, continues to perform miracles. That spirit, one which we feared had been lost of late, enabled the players to recover from a truly pathetic first half performance – clawing back a 2-0 deficit to take a useful point from Bramall Lane.

At the interval it felt like we should be calling time on a number of players’ City careers. To plead with Phil Parkinson to remove some of the struggling 2012/13 promotion winners from the firing line, before they destroy their hero legacies. But this comeback – whilst lacking in quality and failing to fully answer a growing list of questions – was a statement of defiance. A clear message from the players that they are not yet giving up on themselves; and neither should we give up on them.

Fittingly, Gary Jones was at the forefront of the redemption. City’s skipper has been heavily criticised in recent weeks and, like so many others, under-performed badly in the first half. But the bite was back in his play. He refused to let City surrender – screaming and urging on everyone around him. You could clearly see how hurt he was by his team’s feeble first half showing.

Jones improved significantly after the break and so did his team mates – the 36-year-old rewarded for his courage by a deflected low drive rolling into the bottom corner to put City back into the game. It could ultimately be looked back upon as one of the most important moments of the season.

Seven minutes later, the visitors had taken advantage of Sheffield United’s nervousness to level the game. Jones’ free kick from out-wide, James Hanson’s tap in at the far post. Pandemonium in the away end, as 3,000 of us City fans wildly celebrated the most unlikely of fightbacks. Jones raced to the front of the lower tier and clenched his fist in triumph. The whole team deserve credit for the turnaround – not least debut striker Aaron McLean, who had a hand in both goals – but the veteran was the true inspiration behind it.

He still has so much to offer the club.

When McLean burst through moments after Hanson’s goal, the dream of come-from-behind victory was on. But in reality Sheffield United would regroup, push forwards and dominate the remaining half hour. They will wonder how they didn’t win a game which they bossed for all but those seven costly minutes. But City’s strong team spirit has thwarted bigger and better teams than the Blades in the recent past, and it was enough to get the players through to the final whistle.

Yet as welcome as a point on the road always is, there were serious concerns about this performance that cannot be ignored. The first half showing was bad – very, very bad – and there are a number of problem areas within the team that the growing injury list is not helping.

Sheffield United raced out of the blocks to open the scoring after only seven minutes, when the outstanding Tony McMahon squeezed past Carl McHugh to whip in a clinical low cross that was swept home by Jamie Murphy. City might have responded straight away – a header from James Hanson smacking the crossbar and the rebound attempt from McHugh blocked on the line. The players argued loudly that the blocking came from a Sheffield United arm, but referee Roger East – who had a truly appalling game – sided against the Bantams. A more home-biased referee you will struggle to find.

Trailing in a game – no matter how early on – always prompts supporter anxiety that translates onto the players; and today there was heavy air of frustration as passing moves and attacks easily broke down. Kyel Reid slowly began to get into the game and cause problems. Sheffield United’s McMahon was obviously concerned by Reid’s threat and put in a strong challenge which left the City winger in a heap on the ground and – after a long delay – stretchered off the pitch. Again East took no action against McMahon, and the impact that Reid’s removal had in weakening the City XI was quickly exposed.

Five minutes before half time it was 2-0. Harry Maguire headed a corner – unmarked – goalwards and Jason Kennedy, stood on the line, somehow failed to keep the ball out. One of the feeblest goals that City have conceded all season. As Sheffield United continued to pour forward with menace, you began to fear the worst for a hiding.

The team was malfunctioning. Kennedy and Jones might have done great things together at Rochdale, but they just don’t seem to complement each other as a pairing. Kennedy enjoyed his best game in a Bantams shirt against Bristol City last week, but today he was once again reduced to peripheral contributor. I just don’t see what his strengths are and what he offers that is different or better to Jones, Nathan Doyle and Ricky Ravenhill.

He was not the only summer signing who has disappointed so far. An earlier-than-expected introduction for Mark Yeates – replacing the injured Reid – should have presented the former Blade with a big opportunity to stake a claim for a starting place. Within minutes he ducked out of a 50-50 challenge, and in general failed to offer anything positive in the final third of the pitch.

I still believe that Yeates is the most talented player at the club, but for effort and application he would currently be ranked amongst the lowest. Yeates was not giving 100% and I find that difficult to stomach. There is simply no excuse for some of the things he did – and did not do – today.

The chief victim of Yeates’ lack of defensive support was McHugh. The centre back – covering the injured James Meredith at left back – was taken to the cleaners by Ryan Flynn during the first half. It was heart-breaking to see a young player embarrassed so badly; but McHugh is not playing in his natural position, and has every right to demand the support of others in making a go of it. Yeates failed to offer him that support – not even close. Parkinson switched McHugh and centre back Matthew Bates over at half time; and both fared much better in their new positions. Yeates, to his credit, supported his left back much more effectively after the interval.

The second half saw that Jones-led improvement, and in no time at all City were level. It was then a matter of defending deep and hitting Sheffield United on the break, as the home side knocked loudly on the door. Jose Baxter gave Stephen Darby one of his most difficult afternoons of the season, and it was a relief when the former Everton man hobbled off injured.

With little coming from the centre of City’s midfield or the flanks – at one stage Garry Thompson under-hit a cross, got another chance and then over-hit his second attempt – Hanson and McLean fed on scraps. There was promise to their link-up approach that already looks set to mirror the Hanson-Wells partnership. McLean showed good strength and intelligent running – he should have had a penalty when he was clotheslined in the box. A reasonable debut overall.

A point was merited for the spirit that was evident, but Parkinson has much to ponder over the 10-day break before high-flying Preston come to Valley Parade. He must address the sudden drying up of chances created for his front two; he must re-boot Nathan Doyle so he gets back to his early season form; he must hope that Andrew Davies’ imminent return – he warmed up on the pitch before the match – shores up a leaky defence.

There is no doubt that major squad restructuring is going to be required to take City forwards next season; but in the short-term, the limitations of this group of players shouldn’t be significant enough to prompt the level of concern that Sheffield United fans continue to feel regarding their League One status.

City clearly need to start winning some games, but they are not losing many either. A January nip and tuck – rather than major surgery – will see us through to the end of this season. And whatever Phil Parkinson’s summer thinking on who goes and stays for next season, he must ensure that this squad’s commendable spirit appears at the very top of his retained list.