Somebody else’s cup final as Bradford City go to Swindon 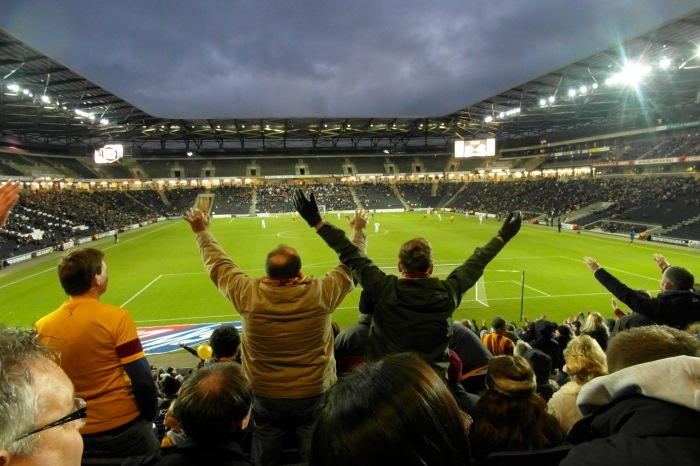 The quirk of going into the Easter weekend facing the two sides vying for the same final play off spot was the effect that Bradford City’s Good Friday result would have on their Monday fixture.

As sixth-placed Peterborough United began Easter seven points clear of Swindon Town, victory at Valley Parade would have all but sealed them a play off finish, meaning the Bantams’ Monday game at Swindon would be largely meaningless for the home side. Instead, City’s impressive defeat of the Posh – coupled with Swindon’s win at the fast-fading Coventry – has cut the play off gap to four points. This is now suddenly a huge match for Swindon, who know that achieving a sixth victory in seven, coupled with Carlisle taking something from Peterborough at London Road, would put them right back into contention.

A good job, then, that the pressure is firmly off City. They stand nine points clear of the drop zone and will travel back from Swindon mathematically safe whatever the result in Wiltshire. The grim battle to avoid finishing in the bottom four probably still involves 10 teams – the Bantams are not one of them.

That is largely due to a run of defensive excellence that – the collapses against Shrewsbury, Walsall and Oldham apart – have seen Jon McLaughlin’s goal superbly protected. City’s last nine matches have featured five clean sheets – a run that has coincided with Adam Drury’s arrival on loan from Leeds United. Whilst the veteran left back hasn’t prompted much excitement, his steady performances have been exactly what was required for an area of the team that has been a problem since James Meredith endured a long-term injury on New Years Day.

Stephen Darby has continued to be Stephen Darby. Andrew Davies has largely being terrific, save for the occasional dip, and Rory McArdle has improved immensely. A difficult season for the Northern Ireland international is ending on a high note, just when it comes to the time of the club ruling on his future.

Expect this high-performing back four to remain in place at the County Ground (with James Meredith making a welcome return on the bench). Parkinson has talked of making some changes from Friday to freshen things up, and that will most likely occur in the midfield and striker positions. It is the last game in which Adam Reach will be available for selection, as his loan deal expires this week and cannot be renewed for the final two games. The left winger was a revelation in the hole behind the strikers on Friday, delivering his best 90-minute performance since joining the club in January.

Expect Kyle Bennett to be recalled on the right wing for a conventional 4-4-2 (although Phil Parkinson might opt for the 4-5-1 that worked so well against Rotherham in the last away match). Rafa De Vita surprised many people – not least myself – with his excellent display on Friday night. There is no doubt that he possesses great quality on the ball and his first half cross for James Hanson, at 0-0, was outstanding. It is perhaps too little too late for the soon-to-be-out-of-contract Italian, but he will hope to get a chance, over the final few weeks, to convince Parkinson that he could make a better overall impact next season.

Matty Dolan will also come in either for Nathan Doyle or Gary Jones, or alongside them in a five-man midfield. Doyle’s return to the side has been typically understated but nonetheless impressive. For the last two games he has sat in front of the back four and looks so well suited for that role, dictating the game. It’s going to be interesting to see if Doyle is retained this summer, as inconsistency has blighted his season, but on form – and at a decent age – he is someone to build next season’s team around.

Up front Hanson will probably be spared two games in four days after being out for a few weeks, meaning Aaron Mclean returns to the starting line up to partner Jon Stead. Hanson and Stead led the line well together on Friday night. There is a growing clamour to sign Stead up for next season and I would certainly be in favour of that, although it needs to be highlighted that he is never going to score a hatful of goals for City – just look at his career stats. Stead would make a good third choice striker behind Hanson and Mclean, but let’s not turn on him if he signs and doesn’t trouble the leading scorers. No should be in any doubt about what we would be buying.

With survival all but secured (and no one can seriously suggest it is in any doubt now) the last three matches present Parkinson with opportunities to blood young players – at least from the bench – and to begin planning for next season. The manager might not admit it, but he and Steve Parkin must have gathered thoughts on who will be kept on and who is to be released, and these final few games offer those players with a question mark against them a chance to prove their worth.

There are certainly some borderline cases, and though whatever is achieved between now and the final whistle must be tempered somewhat by the fact the team is playing without pressure, there cannot be any let up from those who want to be part of Bradford City’s 2014/15 campaign.