Home › Match Reviews › Always look on the bright side of life

Always look on the bright side of life

Words and images by Jason McKeown

As I stood there in the Cowshed Stand, watching my beloved football club relegate another, it struck me just what a complex relationship each of us has with the team we support, and the incredible amount of emotional investment we have committed over many, many years.

Nothing in life – beyond my wife and child – has provided me with as much pleasure as Bradford City; and yet I also can’t think of anything that has consistently provided me with so much pain. All those hours spent not only attending matches, but fretting about results and performances. All the sacrifices I – and those around me – have to make. Compare the person that I am today to the one who first set foot inside Valley Parade and, beyond family and friends, there is not one aspect of what was important to me then that remains. Nothing, that is, apart from going to watch Bradford City.

And as another season of joy, frustration, delight, anger and excitement comes to end, we found ourselves laughing very loudly at the misfortune of others. Schadenfreude, as the Germans say. It is ludicrously cruel to react as we supporters did to Tranmere’s relegation – right in front of their fans, who were enduring arguably their darkest hour in decades. How they must surely hate us forever after this, and who can blame them?

But, well…so what? Excuse my language, but f*** it. This was a hilarious experience, and being part of some 2,000 City fans revelling in a party that had gone sour for the hosts will keep me chuckling throughout the summer. I have no axe to grind against Tranmere, really I don’t, and that’s kind of the point: it could have been anyone. If there’s any consolation, Rovers fans, it really wasn’t personal. Honest.

If this all sounds wrong to anyone who wasn’t part of the bouncing away support, I can only shrug my shoulders and weakly defend myself and others with the cop-out ‘you had to be there’. Or actually, you didn’t. Because relegation is something that every football fan in England, outside of the top Premier League clubs, has endured at some point. And it’s not so much the pain of relegation that blights the life of any football fan – it occurs only occasionally to most of us – but the greater amount of time spent fearing relegation. It dangles over so many of us so often, like a dagger from above ready to strike.

Following Bradford City for nearly two decades, I have been lucky enough to witness promotions and wonderful players and unbelievable goals and last minute winners and beating Liverpool and cup runs and going to Wembley twice. But more than anything else in my time following the club, I have feared relegation. Even in years of mid-table finishes, there has often been a moment where we got flustered over the league position and fretted over some unlikely collapse. In the midst of more serious relegation battles, I have genuinely lied awake at night feeling frightened. And of course, we have gone all the way and actually experienced relegation, several times.

So I – and no doubt most people around me in the Cowshed Stand – took a strange and perverse joy in watching someone else’s torture and pain. It really was enjoyable, partly because we knew what it felt like to be them. It will probably come back to haunt us on day – most things tend to in football – but on a lovely sunny May afternoon in Birkenhead, any long-term consequences of our glee failed to register. Sometimes, supporting a football club allows us to regress in our maturity and go back to laughing when people fart. 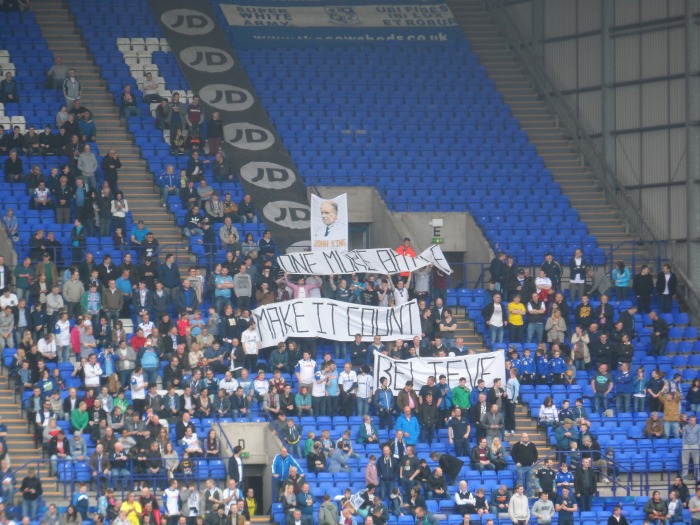 The cruelness of Tranmere’s harrowing afternoon was amplified by the fact much of it must have been spent believing they were going to get out of trouble. In a game they realistically had to win, Rovers took the lead after seven minutes and held onto it until there were less than 10 on the clock. And then, they managed to lose the match.

Matthew Pennington scored Tranmere’s precious early goal, although a huge slice of credit went to Jon McLaughlin, after his weak hand to a wayward shot completely changed the ball’s direction so that it bounced into the net. Ahead of a week where McLaughlin finds out if he is to be offered terms to remain at Valley Parade, this was a horror moment for the Scot that he must hope won’t affect Phil Parkinson’s decision. That McLaughlin subsequently made two brilliant saves may redeem him.

Nevertheless, as the home side found success in keeping the game’s tempo slow and expertly defending mostly disjointed visitor attacks, for a long time it looked as though McLaughlin’s mistake would win the match and, potentially, keep Tranmere in League One. They still needed results elsewhere to go their way, and on that front Crewe’s lead against Preston and Notts County still drawing at Oldham meant fate remained out of their hands.

The heavy tension saw an increasing edge, and tackles grew fiercer and fiercer as referee Graham Scott seemed reluctant to clamp down on the rising anger. It reached boiling point when Junior Brown went in late on Nathan Doyle. The on-loan Fleetwood winger was somewhat harshly red-carded and Tranmere faced up to playing for over an hour with 10 men.

That it took so long for City to make the numerical advantage count is something the home defence in particular deserves great credit for. Ian Goodison might have a questionable character in view of his horrendous elbow on Kyel Reid, in the reverse fixture, and the criminal charges against him – but the veteran defender was outstanding at the back. City pressure came largely from set pieces rather than through open play, and on another day – with a lot more at stake – these failings would have triggered greater frustration from the away end.

For a few brief minutes – seven in fact – Tranmere climbed out of the bottom four. A huge cheer rang out from the opposite side of the ground, as news emerged that Notts County had fallen behind at Oldham. Crewe were now 2-0 up but it didn’t matter to Rovers, so long as Oldham held out. Alan Sheehan’s 75th minute penalty equaliser for Notts County at Boundary Park also triggered loud cheering – this time from those of us in the Cowshed Stand. We were losing this game, but boy were we having a good time. 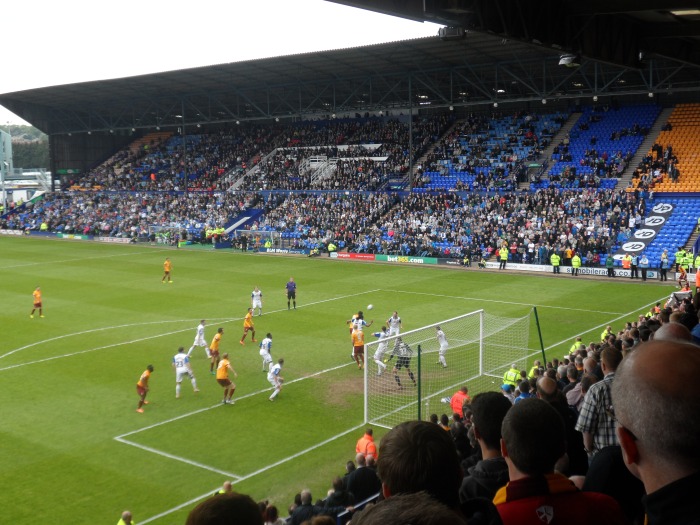 A red card for Notts County suggested Tranmere could realistically hope for an Oldham winner, but the only team with 10-men to fold was their own. Finally, with nine minutes to play, Jon Stead equalised with a low finish that was deflected into the goal by, of all people, Goodison. It was ironic that the on-loan Stead finally broke his duck during his least effective performance for City. We went wild celebrating – Joint-Chairman Mark Lawn, stood on the row behind me, included. “Que sera sera, whatever will be will be, you’re going to Shrewsbury, que sera sera.”

Tranmere folded at that point, as City pressed for a winner. In what was in truth an average Bantams’ performance, only Gary Jones really stood out and those around him struggled to make any impact. This included Aaron Mclean, but then – after a poor goal kick from James Mooney – the City striker was presented with a shooting opportunity and clinically drove the ball past the keeper and into the bottom corner. Cue pandemonium. Mclean’s last two performances have not been great, but a goal in each bodes well for next season. “Aaron Mclean, goal machine!” boomed out. Indeed.

Mclean might have made it 3-1 when another shot was well blocked by Mooney, but even an improbable two-goal swing for Tranmere would not have saved them. Notts County had secured the point they needed, and Crewe had defeated Preston despite the scare of a late North End goal. Home fans streamed out of the stadium before the end, as we continued to rub it in. 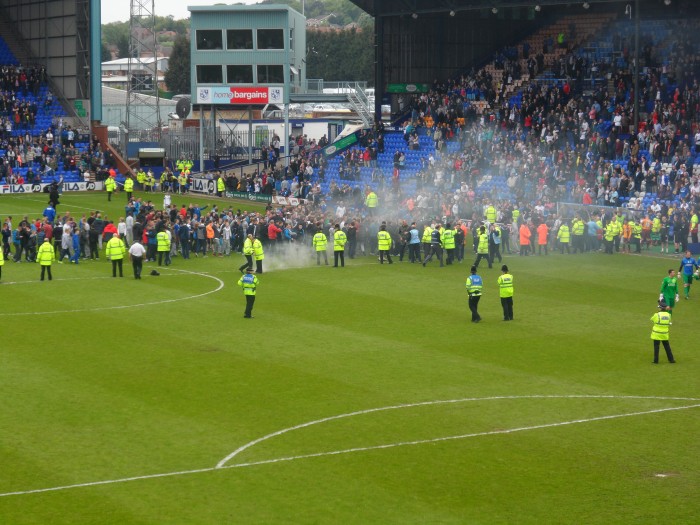 The final whistle brought strange scenes, as a Tranmere player appeared to have an almighty bust-up with a home supporter, where he had to be dragged away, and teenage Rovers fans invaded the pitch for reasons unknown. The stewards ensured they couldn’t cross the halfway line, which meant the City players could come over and thank their supporters. All but Mclean gave away their shirts.

There was some sadness at seeing them eventually head to the dressing rooms, as it sunk in that many were saying their goodbyes and will be plying their trade elsewhere next season. Nine of today’s 18-man squad were part of the ‘We Made History’ team, and eight of them are now out of contract. We have come a long way together, these players and us supporters. It truly feels like the end of an era.

And a very joyful era at that, one of the greatest in the club’s history. Perhaps that partly explained the overriding mood of happiness that emanated across the entire Cowshed Stand all afternoon. Relegations, administrations and other, even darker times: we’ve had more than our fair share of pain, misery and upset following Bradford City, and we shouldn’t pass up on opportunities, such as this, to smile.

Through the never-ending narrative of football, what can often be overlooked is that supporting your team is supposed to be fun. There was no danger of forgetting that here.