Home › Retrospective › We Made History one year on: those who left Bradford City

We Made History one year on: those who left Bradford City 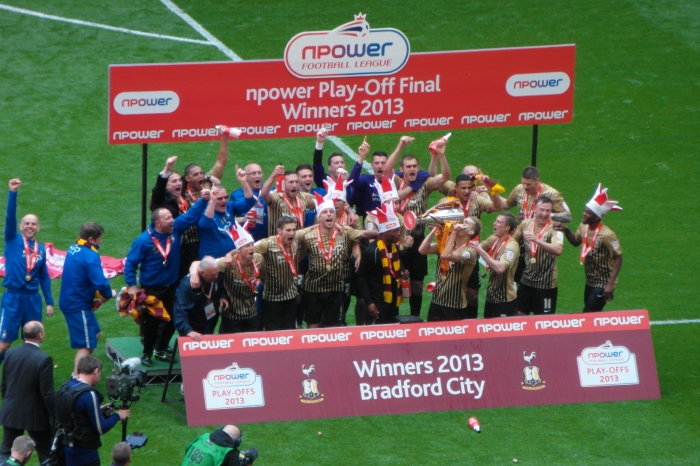 Whilst we have followed the fortunes of those who remained with the club following last season’s heroics, what about those who are no longer at the club?

Duke was incredible in most of the games during the League Cup run last year, most memorably against Arsenal, and in both legs against Aston Villa. This season, Duke has started every game for Northampton Town, with the Cobblers just retaining their League Two status, finishing 21st. Northampton conceded 57 goals this season (2 less than 9th placed Dagenham and Redbridge), with Duke keeping nine clean sheets.

The Newcastle loanee, who started the League Cup final, has suffered an injury-plagued season. The Australian has only managed six games this season, with one cup appearance for Newcastle and five games for Dundee United in the Scottish Premiership.

Remarkably, Good has won five out of the six games he has played in this season, but only kept one clean sheet. Good is hoping that he can stay injury-free for the World Cup, and is in the Australia squad for Brazil.

The midfielder moved to Southend in the summer, and has missed just one game for them all season, as Southend finished in the play off places in League Two. Atkinson’s side played Burton Albion in the play offs but were defeated over two legs.

Much has been said of the Bermudan’s move to Huddersfield Town, but since departing for the John Smith’s stadium, Wells has scored seven goals in 22 appearances. This is a rate well behind his 14 goals in 21 appearances at the start of this season for City, but nonetheless Wells has made a solid, if unspectacular, start to his Championship career, despite Town’s awful form towards the end of the season.

The combative midfielder moved to Northampton Town on loan in November, before returning permanently to Sixfields in January. Since then, Ravenhill has made 19 starts, picking up four bookings and one red card.

The winger, who was an unused substitute in the League Cup final, has had loan spells at Colchester United, Rotherham United and Dagenham and Redbridge, but has only managed 10 appearances between those three clubs, scoring once. Turgott has also made an appearance for West Ham, but unfortunately it was in a 5-0 defeat in the FA Cup, away at Nottingham Forest.

Connell, who started just 8 league games for City, yet came off the bench 35 times, moved to Northampton at the end of January, along with Ravenhill. Connell has made 16 appearances for the Cobblers, but didn’t find the net. Connell was not offered a new contract by manager Chris Wilder, and thus is a free agent at the minute.

The winger/striker signed for Dagenham and Redbridge last August, and this season has been his most successful to date in terms of appearances and goals, starting 26 times, and scoring six goals.

Nelson made just 13 appearances for City, after signing in January for £30,000. He departed just before the start of the season for Hibernian, in the Scottish Premiership, and there Nelson has been a regular in the Hibs side, making 34 appearances for the Edinburgh team.

The 2012 Player of the Season winner was very unlucky last year, missing most of last season through injury, and he joined Conference side Forest Green Rovers in February. Since then, he has become a mainstay of the team, making 11 appearances, including 8 consecutive starts in April.

Like Loading...
‹ We Made History one year on: ending 12 years of hurt
McArdle prepares to give his best years to Bradford City ›