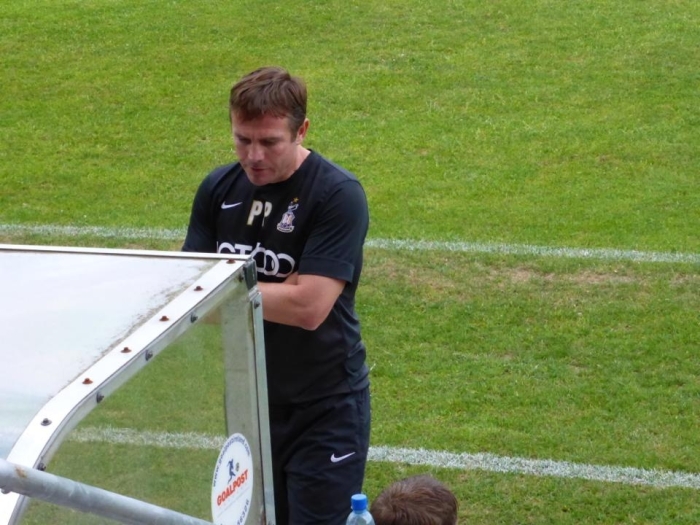 Longevity has become a rare thing in English football management. Short-termism reigns even at the home of the country’s most successful football club. Where once upon a time Manchester United was the universal example used to illustrate the benefits of sticking with an under-pressure manager – Sir Alex Ferguson and his torrid first few years in charge – the Old Trafford outfit ditched his replacement after less than 10 months. Nothing out of the ordinary these days, it seems.

The ever-increasingly speed of the managerial merry-go-round leaves Phil Parkinson in a curious position – he is now the 13th longest serving manager out of the 92 Premier League and Football League clubs. He has not yet been in the Valley Parade dugout for three years, yet in that time 86% of the other 91 have changed their manager at least once. Above him in the list, the likes of Sam Allardyce, Alan Pardew, Paul Tisdale and Mark Yates ended the season under pressure. It probably won’t be long until Parkinson enters the top 10.

Even more notable is how Parkinson’s time in charge now compares to the 45 permanent managers who have preceded him at Valley Parade. This season, Parkinson overtook recent longish-term City bosses Colin Todd and Stuart McCall to become the seventh longest-serving manager in the club’s history. If he is still here 12 months from now, he will be sixth. If he sees out the remaining two years of his contract, he will be fifth.

161 games in charge; 52 victories, 54 draws and 55 defeats. More notably, Phil Parkinson has steered the Bantams away from relegation to non-league, taken them to a major cup final, masterminded promotion via the play offs and achieved a top half finish in a higher division. It is some list of accomplishments, and it leaves Bradford City in a state of relative rude health both on and off the pitch.

From the 18-place League Two finish City achieved in May 2012 to the final League One table of May 2014, Parkinson has engineered a rise of 30 places up the 92-club pyramid. No club in the 92 can match that improvement over the same period (only Rotherham, Crystal Palace and Bournemouth come close).

And this, for a football club that had endured 12 years of misery and failure. A football club that went through nine managers since Paul Jewell’s resignation in 2000, which triggered the 12-year curse. Parkinson, who was voted Bradford City’s greatest ever manager in a Football League survey, deserves every bit of the high esteem that the majority of supporters hold him in. He is a proven winner, who has revitalised the club.

2013/14 was not a perfect season for Parkinson by any means. Yet even the criticisms that can levelled towards him are ones that every other manager in the land has endured too – even the very best. Anyone outraged at Parkinson making poor signings, as though no other manager makes mistakes in the transfer market, is living in Djemba-Djemba Land. Every club experiences poor runs of form such as Parkinson’s ‘one win in…’ record between October and February. The difference between the managers who survive and prosper, and those who fall by the wayside, is the ability to react to difficult periods and to rectify mistakes.

And Parkinson’s transfer mistake, last summer, was to bring in squad players rather than people to displace the promotion heroes. Only Mark Yeates looked as though he had the manager’s backing to become a week-in, week-out starter – but even that trust faded less than a month into the season. When last summer Parkinson cut ties with squad players from the 2012/13 season, he unfortunately replaced their squad roles rather than those of the first teamers. It is not that there was anything wrong with retaining the ‘We Made History’ team, as they deserved their chance, but it meant the new faces only succeeded in making up the numbers.

Parkinson’s rectifying of those errors can be seen even now. There has been a more ruthless streak to this summer’s retained list that not only sees Gary Jones let go, but promising young talent like Jack Stockdill. Going with the 2012/13 heroes initially paid off early in 2013/14, but when form began to dip the fringe players failed to step up to the mark and provide adequate competition to reverse the slide.

The January window business provided that shake up, with loan players coming in and doing a good job. This was short-termism from the manager, but vital in securing the long-term platform of remaining a League One club. Mid-season was not a time for revolution, and so the calm manner in which Parkinson strengthened the team with temporary signings paid big dividends. If the 2013 summer transfer window was not a good performance from the manager, January was a different story.

And it meant that the slide of form was ultimately reversed without too much damage. For all the relegation panic engineered by some, it evidently wasn’t shared by those who were in a position to do something about the slump. The final third of the season saw some poor performances, but an overall sharp improvement in results. To finish in the top half of the division looked highly unlikely even with four games to go. To finish in the top half of the division, after all the disruption surrounding Andrew Davies, Nahki Wells, James Meredith, Kyel Reid, Nathan Doyle and James Hanson, represents a highly commendable season’s work.

A season of consolidation, behind which the underlying theme has been one of transition. The We Made History team are now being consigned to history. The great side that Parkinson built in 2012 is going to be firmly rebuilt. Unlike last summer, the manager is not hunting squad players but first teamers. That suspect record in the transfer market since 2012 means that his new signings will be under an intense spotlight to deliver and deliver quickly, but the fact Parkinson was so successful in constructing the 2012 team means there should be few doubts that he can do it again.

He will need to, because the next 12 months look tricky. For all the accolades Parkinson rightly receives for the three previous seasons, still being in the Valley Parade hotseat a year from now will represent an achievement. 2013/14 may have ended with goodwill, but it won’t be forgotten that in the difficult days of January and February a section of City supporters turned on Parkinson and demanded a change. We have a long history of managers in the position of being subject to volatile swings in supporter opinion. A bad start to the season or a few defeats next autumn will see the pressure crank up once again. Parkinson’s considerable past achievements will either be forgotten or talked down.

Perhaps the main issue facing the manager is one of expectations. Julian Rhodes has confirmed that Parkinson’s playing budget is to be cut by a sizeable £500k, yet there will be an assumption that he must still improve on 2013/14’s 11th position, otherwise the perception will be that City are going backwards. Rightly or wrongly, this football club has designs beyond being a League One outfit and patience will be in short supply. It might not be fair to expect a play off push next season, but it won’t stop some people from demanding it.

And in time, finishing 11th in League One could be a stick with which to beat Parkinson with. In a tight division, had Garry Thompson and Aaron Mclean not netted late winners in the final two matches of the season, the Bantams would have finished 15th. Yet if in a year’s time that is where Parkinson has taken the club to – reduced budget and all – he is likely to be facing serious disgruntlement from a growing section of supporters.

I firmly believe that the three-year contract handed to Parkinson a year ago should be a timeframe during which to be climbing out of League One. If in May 2016 – when that deal expires – City are still in League One mid-table and failing to challenge for the play offs, then it would be fair to assume that a change is needed to kick start the progression. But that doesn’t mean that a failure to mount a promotion push next season is indeed a failure. A stronger flirtation with the play offs would certainly be welcomed, but not assumed. The next step up in divisions is a big one, and we will need firm foundations to not only make that jump but stay there.

The three-year contract Parkinson signed should, in theory, afford him the time to build something even more sustainable than 2012. We are exactly where we would have wanted to be at this stage in the contract, when it was signed a year ago, but getting here hasn’t been a smooth ride and has seen the manager struggle to retain his previous vast popularity. Achieving what is expected is still viewed as disappointing to some. The longer that carries on, the more of a problem it may become.

Yet Parkinson’s impressive track record so far demonstrates the benefits of long-term thinking. It might be out of synch with the rest of English football, but let’s continue to stick with the plan rather than getting ahead of ourselves in where we should be. Let’s be positive about the changes that are coming, and give them the time they need to bear fruit. Let’s remember that when sticky times inevitably occur we have a manager who has repeatedly proven that he can find the solutions.

Let’s continue to believe in Parkinson, because believing in Parkinson has paid huge dividends over the past three seasons.

Like Loading...
‹ McArdle prepares to give his best years to Bradford City
The Midweek Player Focus #59: Nathan Doyle ›