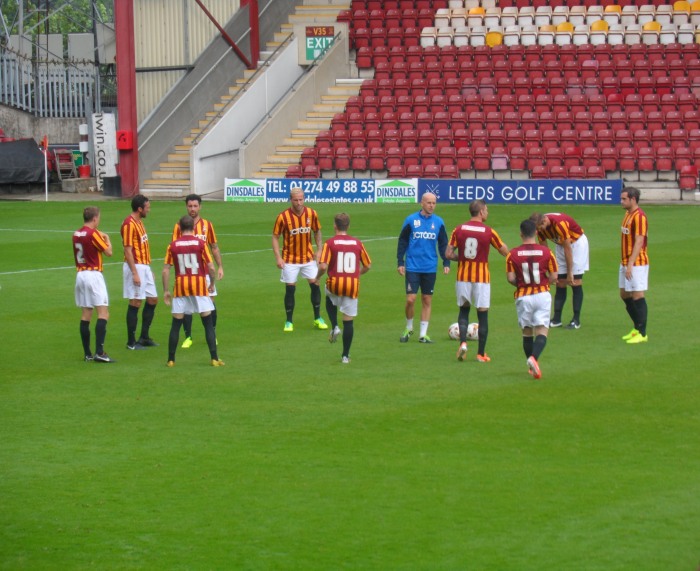 This will not be a relaxing week for Phil Parkinson. As the big kick off creeps onto the horizon, there is still much to do in rebuilding the squad for the challenges ahead. And when the manager’s week is not tied up with finalising last-minute transfer deals or making sure his players are ready for next Saturday’s opener with Coventry, he will find it difficult to switch off from contemplating the strategy for this season.

Is this new shift the right one? Are the short-term issues going to derail momentum?

In this, Bradford City’s final pre-season friendly before it all gets serious once more, there was comfort to be taken from the quality of the home players on the field. The XI that started against Hartlepool United is likely to be the same team that lines up against the Sky Blues. Parkinson – who watched the first half of this encounter in the press box – can take satisfaction over his summer recruitment so far, in difficult circumstances. He has signed some very good players, who should flourish over the months.

But it was his bench this afternoon that raises the most concern. Just two senior players – James Meredith and Jason Kennedy – took their places alongside a clutch of trialists and youth teamers. On the day that it was announced Aaron Mclean will miss the start of the season, it is unsettling to see just how little strength and depth there is within the Bradford City squad, as it stands. The consequences of a further couple of injuries do not bear thinking about. Parkinson needs more players and quickly. But above all else, he needs more quality players.

The absence of Mclean all pre-season is a nightmare scenario, given so much rests on the striker’s shoulders. The team has been re-jigged to get the best out of the 31-year-old, but there has been no opportunity for the new players to gel with him on the field. Starting the season without Mclean is going to disrupt the new-look diamond formation too, because already Parkinson is being forced to push players into roles that they are less suited to.

Take Billy Clarke, who once again partnered James Hanson up front. The former Ipswich and Blackpool frontman was arguably City’s best player today, but his game is almost entirely played outside of the penalty area, as he prefers to take up positions out wide or deeper. Clarke should be the front-runner for playing behind the two strikers at the tip of the diamond; he does not look like the right man to partner Hanson in leading the line.

The result was a front-pairing too isolated from each other when City had the ball, and very few chances were created. The more we see of Hanson in this diamond formation, the less effective he looks – which is a worry. At present it does not seem to be a system as ideally suited to Hanson’s strengths, and he has not scored a single goal in pre-season, or even looked like scoring. You can understand why Parkinson will probably have to go with Hanson and Clarke as his two strikers next week, but you can’t imagine City scoring many goals this way.

By pushing Clarke up front, Mark Yeates had to play in the ‘hole’ – a role he can perform very well – and Matty Dolan pushed wide left. Dolan looked lost at times; and on one occasion was loudly berated by Yeates, who was angry at his team-mate’s positioning. Dolan is ideally suited to playing in front of the back four – just like the once-again-outstanding Gary Liddle. It is hard to see the diamond formation working with both Liddle and Dolan in the team, as City need more craft in the wide areas than either can offer.

That was the problem in the first half at least – the usefulness of the diamond formation was reduced by players being forced to play in less than ideal positions for their respective strengths. And the root cause of this reshuffle was an injury to one key player in Mclean, and his back-up, Lewis Clarkson. There simply are not enough alternative options available for City to survive a couple of injuries or suspensions. We know this situation will change very quickly, but it sits uneasy with everyone to go into the final week, before the season starts, with significant recruitment issues waiting to be resolved.

Matthew Bates is warmly welcomed back to Valley Parade.

It is expected that two wingers will join very shortly, and their arrivals will widen the range of options available to Parkinson. Against run-of-the-mill League Two opposition here, the merits of the diamond formation came under heavy scrutiny in how well it might work in different scenarios. Colin Cooper’s Hartlepool side played conservatively and kept nine men behind the ball whenever the home side were in possession – and the resultant lack of space afforded to City neutered the vibrancy of their passing game.

At times it was too congested in and around the Hartlepool box. City players attempted to provide good off-the-ball movement, but possession was easily squandered. When it worked – Billy Knott running onto a clever dummy by Clarke and forcing a decent save from Hartlepool keeper Scott Flinders – there was a genuine cutting edge to City’s play. But for large parts of the game, it was surprising how easy Hartlepool found it defending against the diamond.

There are few League One clubs who will come to Valley Parade this season and park the bus; but if any do – on this evidence – City will struggle to break them down with a diamond formation. It would certainly be interesting to see how a larger City crowd would have reacted to this type of game if there had been something at stake. If the Bantams are losing at home and the visitors are sticking everyone behind the ball, expect to hear loud cries for Parkinson to introduce wide players.

Yet there were many positives about this draw too. In the second half – with Parkinson back in the dugout – City seemed to get a better grip on proceedings and played the diamond system to a higher tempo. What a class act Knott appears to be, and his first touch is something to behold. There was a moment where he picked up the ball inside the box and flummoxed his marker with a delightful turn. Knott is a box of tricks and has a workrate to match. Parkinson appears to have secured a real gem, and must ensure that he makes the most of him over the coming months.

The defence continues to look solid, with Alan Sheehan an upgrade on Meredith (although the Aussie too impressed when he came on as substitute to play in a midfield role). For the most part Jordan Pickford had little to do, although he did make a brilliant low save, when a Bradley Walker shot took a deflection as it headed towards goal. The on-loan Sunderland keeper had little chance when Walker picked his spot to fire Hartlepool into the lead a few minutes later. Trialist Matt Urwin sat unused on the bench. A back-up keeper must be sought in time to play at Morecambe in just over a week’s time, but Parkinson will want to do better than the former Blackburn stopper.

City were behind for barely a minute, with Clarke deservedly getting a goal following a crisp low shot from an angle. He later departed the field to a fantastic ovation. On a personal level, Clarke may worry that having to play up front will see him lose out on staking an early claim for the ‘hole’ ahead of Yeates; and that when a full Valley Parade crowd rocks up to take a first look at him, supporters will get a misleading first impression over what he can really do.

Certainly someone who did make an impression was Mo Shariff, who was introduced with five minutes to go and caught the eye with a stunning volley attempt from 30 yards out that was superbly tipped onto the bar by Flinders. The former QPR man is a confident player for sure and on the evidence of pre-season could be trusted to appear in the City first team very quickly. Of all the many trialists Parkinson has cast his eye over during the last few weeks, Shariff looks the strongest contender to earn a deal. French defender Christope Routis – who made a cameo off the bench – is also a good bet to earn a place in the squad, as Rory McArdle’s deputy.

So plenty of food for thought for Parkinson. He would surely have hoped to see the new formation prove more effective against league opposition, and he will remain desperate to get those extra bodies into the building in good time for the big kick off. The pre-season friendlies have offered so much promise in how the new signings look and the new style of football; but if these final squad places aren’t filled adequately and promptly, there is a very real risk that an encouraging close summer’s transfer business will be seriously undermined.