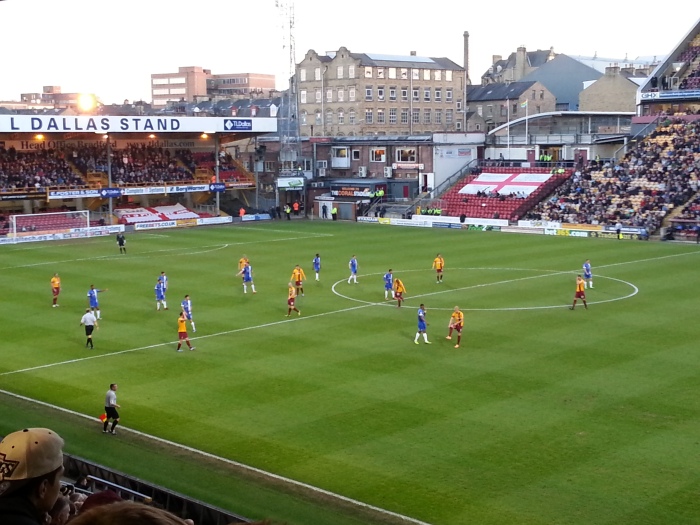 Wednesday night’s Capital One draw threw up some interesting ties, but the highlight was undoubtedly Bradford City’s home clash with Leeds United. The game will mark the first time the two sides have met at Valley Parade for 14 years: back in 2000, Stan Collymore and Mark Viduka offered the goals as the spoils were shared.

Undoubtedly, City have always sought to match Leeds, but the current quality within the Bantams’ ranks, coupled with the malaise and uncertainty that has categorised the Whites’ tumultuous past year, means the divisional gulf is just a mere irrelevance. This tie promises to be one of the most closely fought and hotly fuelled of the entire season. For the first time in a long time, Leeds will stand before a Bradford team that will truly, truly grasp what this rivalry means to us. You close your eyes now and the silhouettes form in your mind’s eye: Jason Kennedy and Billy Knott swerving through the centre of the park; Mark Yeates dancing at the tip of the diamond; Sheehan and Darby doggedly fortifying the back line; Rory McArdle and Andrew Davies valiantly standing as the final bastions.

But that’s one for the future. Width of A Post will offer bumper coverage of the game when the time comes, but the focus now, both among the fans and within the club, rightfully turns to more imminent challenges. With three games to go before United’s team bus rumbles down Midland Road, the onus is on the team to make sure they enter that mouth-watering tie with the league position bolstered further and a hat-trick of promising performances locked under their belts. On the back of the Coventry win, it would be too costly to not maintain that momentum. To echo the doomed words of Steven Gerrard, this must not slip now. We go to Walsall exactly the same.

That said, with Sky snatching the TV rights for the derby, a much needed cash windfall, thought to be £100,000, suddenly comes into the picture. It’s difficult to say at this stage whether that money will go straight into the playing pot or instead towards recuperating this year’s overspend, but the noises from Parkinson suggest he is still trying to bring in new faces.

The picture isn’t complete yet, and we are just about entering the phase of the season where the planned loan signings will become available. Knott and Yeates are capable of playing wide, as is new recruit Mason Bennett, but perhaps one more out-and-out winger is on the shopping list. In the Telegraph and Argus today, Parkinson spoke about possibly loaning out Heaton, Clarkson and McBurnie over the course of the season. The squad looks thinned again without those bodies, but not as desperately bare as it was months ago. Either way, transfer activity is not done and dusted. Parkinson knows the picture can change in an instant. In football, a week is a long time, and five acquisitions at the eleventh hour last week illustrate this. Things can still, and will, fall into place.

Two wins from two – those wins a convincing home performance and decent away showing – have all but assuaged worries about the quality of the starting eleven and, to an extent, have started to condemn woes about the depth of the squad as a whole. Man for man, we stand looking at the most technically gifted and tactically astute side we’ve had in a long time – and they’re even stronger together. Clearly, early season enthusiasm needs to be reined in, but the versatility within the squad heralds a variety that can only serve the Bantams well throughout the campaign. Questions need to be answered still, but there is time – just. The constant question marks hovering over McLean need to be banished, but he is desperate to succeed. What’s been achieved thus far remains pleasing.

Turning to tomorrow, Parkinson has promised to keep shuffling his pack, breeding fitness and competitiveness within the squad so that everyone is up to speed when the heat is turned up towards the end of the month. The general adaptability of the squad means predicting the line-up feels fruitless anyway, but Parkinson’s promise to shake things up makes the guessing game even harder.

The City supremo said yesterday Mason Bennett could potentially be handed a start. A bright – and young – winger also adept at playing as a centre forward, Bennett is held in high regard at parent club Derby County, and adds another dimension to City’s build up play. As with any young player, though, he needs to be bedded carefully, and an outing so shortly after his arrival may come too soon for him. Alan Sheehan is most likely to miss Saturday’s game having flown back to Ireland in the wake of a family bereavement, meaning James Meredith will play at left back. Competition for this slot is rife, so the Australian will have to snatch this opportunity to assert his claim for a place in the side. Davies should partner McArdle at centre half and Darby will retain his place on the right flank. Pickford will start again in goal.

The midfield and forward line will probably to see the biggest areas of change. Gary Liddle is back in contention and should be selected, as should Billy Knott after resting for the most part of Tuesday’s game. If Bennett starts, it’s likely to be at Jason Kennedy’s expense, but perhaps Kennedy’s movement, conservatism, versatility and tidiness will be favoured if Knott is deployed as the wideman. Either Mark Yeates or Billy Clarke could feature in the in the hole – perhaps even Knott – but it will most likely be Yeates, with Clarke partnering Hanson up to ā la Saturday. Sadly, a full 90 minutes would probably again come too soon for McLean – expect him to come on for the final half hour or longer.

City go into the Walsall game on prime footing. The start to the season couldn’t have been better, really. The task now is to maintain this momentum, to walk away from this weekend with the diamond nestled further and the team working well together. The prospect of playing in front of a packed out Valley Parade later this month offers a tantalising incentive. If Parkinson uses that wisely, the tempo will be ramped up now.

Like Loading...
‹ All right on a diamond night as McLean snatches late winner
Remarking on the unremarkable ›