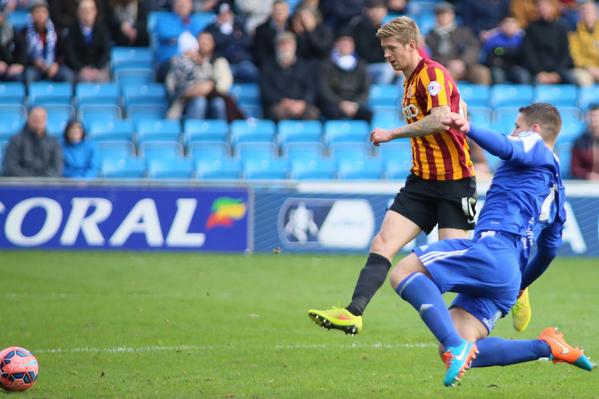 They have waited 30 years for a moment like this, and so for Dartford FC this Sunday’s FA Cup second round trip to Bradford City is clearly a big deal.

Currently languishing in the relegation zone of the Conference, but with a recent history of playing lower down the non-league pyramid, The Darts have not been this close to the lucrative third round since the 1984/85 season, where they were defeated 4-1 by Bournemouth in a replay (you have to go back to 1937 for the last time they made the third round). Bradford City away was hardly the tie they would have wanted, but they have every chance of causing an upset.

216 miles south of Bradford, it is difficult to gauge how big a deal this tie will be to the Kent town. There are 12 Premier League or Football League clubs within a 20-mile radius of Princes Park, so it is unlikely that local interest will be sufficient enough to see thousands and thousands of followers make the seven-hour round trip to West Yorkshire on a Sunday. Their average home attendance of 1,075 is the sixth-lowest in the Conference.

And though the romantic neutrals will be gunning for a giant-killing, the reality for Bradford City is that this game is a big deal too, one that will focus minds. Since relegation from the Championship 10 years ago, the Bantams have only reached the third round stage once, when they were handed the less-than-lucrative trip to Watford that was good fun at least. From a financial perspective, they need to be in Monday night’s third round draw and they need that draw to go more favourably. Dartford home could not be a kinder fixture for getting there.

Effectively the reward on offer this Sunday is that akin to being handed a Tombola ticket. You know that getting hold of one will guarantee a prize, but its value is unclear. In less than a month’s time, City could be pitting their wits against one of the world’s biggest clubs, and the financial gains could be significant in the future direction of the Bantams.

January is undoubtedly a huge month, as the issue of the budget deficit will have to be faced up to once and for all. Joint Chairmen Julian Rhodes claimed that City have put a dent in recuperating the losses, but that there is around three quarters of a million still to go. The former Chief Executive David Baldwin often explained to Width of a Post the range of variants in place for addressing budget deficits, and next month we will be able to observe the club go through each of them.

The first variant is a good cup run, and City have done very well from the knockout competitions this season. The Leeds United victory remains the season’s high point on and off the field, whilst the first round FA Cup win over FC Halifax generated a sizeable TV windfall. If City can get into round three and be paired with a big gun at home, they can look forward to a bonanza of gate receipts and TV money that could completely wipe out the deficit. An away trip to a Chelsea or a Manchester United would not generate the TV interest, but the club would still have a good pay day from its share of the gate money.

If City trip up against Dartford on Sunday, or even if they go through but the cup draw isn’t kind, other variants will come into play. Another one keenly debated is the potential to receive sell-on fees from former youth players sold on, namely Tom Cleverley. The Manchester United midfielder caused a stir in August when he turned down a permanent move to Aston Villa, attempted to agree a transfer to Everton and then had to sign on loan at Villa Park, which earned his former employers just a small cut of a loan fee.

With Cleverley out of contract at Old Trafford this summer, City are praying he will be permanently transferred to Villa Park this January so they receive a sell-on fee (which could reach seven figures). At the moment, this scenario looks to be in the balance, with Cleverley’s form disappointing of late following a strong start.

Still, if City can either reach the third round and land a plump tie, or if Cleverley can find a new permanent home, the headache of the deficit could be solved without the need to move to the last resort – player sales. The struggles of life post-Nahki Wells are a stark reminder of the potential negative consequences of going down this route. No one should be wanting this to happen.

Or at least if it is to happen, the hope is that the player sold would be the unwanted one who is costing the club a fortune. Aaron Mclean’s future at Valley Parade is in some doubt to say the least, and Phil Parkinson and the board must be praying that he impresses enough at London Road for a permanent deal to be arranged in January.

So far, it’s not looking good. Mclean has walked into a Peterborough team in disarray, and has failed to make any impact. Even the re-signing on loan of Mclean’s former Posh strike partner, Craig Mackail-Smith, has made no difference. I watched Sky’s live showing of Peterborough’s 3-0 home defeat to Bristol City, and Mclean barely had a kick. The theory that he failed at City due to not playing a system suited to him always looked dubious. Frankly, I fear he is finished as the force he was.

The worst case scenario for City is that Mclean continues to disappoint at Peterborough, and returns to West Yorkshire in January with that large wage hindering City’s efforts to prosper on the pitch. Another loan move could be arranged of course, but his value would reduce further from a poor time at London Road. The next club would probably only be willing to take on a smaller percentage of the striker’s wages. It is a real issue for City and we can only hope that Mclean somehow finds some form. The fact he is in action against Colchester this Sunday – whose defence shipped six last weekend – surely presents him with an opportunity to locate his reset button.

But if City lose to Dartford (or win but don’t get the right cup draw), and if Cleverley’s future remains unresolved during the next window, and if Mclean is sent back to West Yorkshire unwanted, then what else for City? It is at this point that speculation over James Hanson’s future will truly intensify. City’s most saleable asset could have to be sacrificed.

Last week Width of a Post reported on a whisper that Huddersfield had already made City an offer for their top scorer, and the situation is either aided or complicated by Jon Stead, who is impressing everyone on loan at Valley Parade. It is a talking point for sure: would you be willing to sell Hanson to Huddersfield for a fee plus Jon Stead? You can see the temptation, but personally I’m not sure I’d be happy with this outcome. Especially if this proves the last variant for recouping the deficit.

For if City have to sell Hanson to break even this season, then the transfer fee that comes in will not be used to strengthen the squad. And as Alex Scott has already questioned on WOAP, is Stead a significant improvement on Hanson? In some areas of his game and experience, Stead is a better player for sure. But in others he is less effective – especially with his goal record. I like Stead a lot, and unlike many others I liked him last season too. But he is never going to score many goals for City, and in time that would be used as a stick to beat him with. Hanson may not be the world’s most clinical goalscorer, but his record is significantly better.

And at 31-years-old, Stead’s powers are probably fading, whilst Hanson still has the potential to progress further. Hanson is 27, and football wisdom is that age 27-29 are your peak years. In Stead, we would not be signing someone with a resale value that could help with the next budget deficit problem, and his longevity at Valley Parade would be shorter than Hanson’s.

You can make a case that Stead is a better player to have than Hanson right now – indeed, Parkinson must feel so given his team selections – but not in the long-term. And as a football club, we have to rise above this short-term outlook.

I hope we keep Stead in January, but more than that I hope we are not in a position where we have to sell Hanson. I hope that the legacy of 2012/13 is not wasted so quickly for us to have to have sold both Wells and Hanson to pay the bills. Of course the club must live within its means and may have no choice but to do a deal with Huddersfield or Bolton, but only as a last resort. And at the moment, going into this game, the other variants are very much alive.

So clearly this is an important game for City, and one you would expect them to take seriously. Some changes could be made from the team that impressively defeated Leyton Orient last weekend, but they should be minimal. François Zoko, for example, could be in line for a full debut, and Hanson could be recalled too. Other players who might anticipate some game time include Alan Sheehan and Jason Kennedy, whilst Ben Williams will come in for Jordan Pickford; but any tinkering by Parkinson must not be looked back upon with regret.

It’s a big game for both clubs, even if the prize on offer isn’t going to be clear until 7.30pm the following day. Neither team wants to be in the position of watching the third round draw and grimacing over what they could have won, and City must not underestimate the challenge at hand.

Dartford have nothing to lose, whereas Bradford City – financially – have everything at stake.