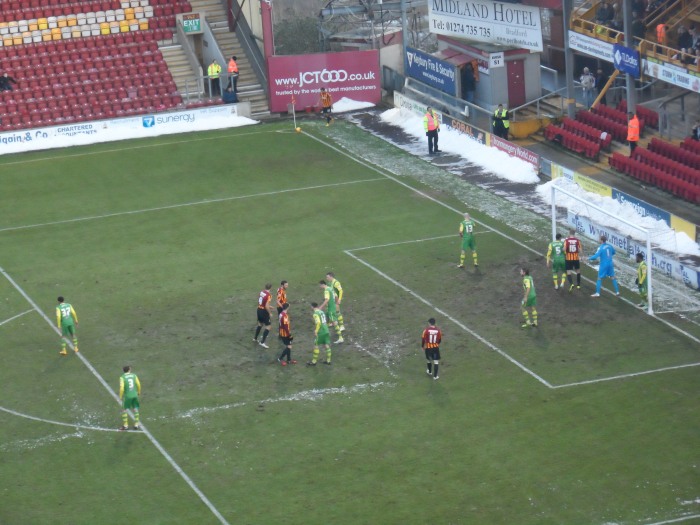 Dogged? Yes. Professional? Yes. Fearless? Yes. Controlled, composed and clinical? You bet. This was a day full of sevens, eights and nines out of ten. Delivering arguably their strongest home display of the entire season, the Bantams offered a performance that will prove integral in shaping the ultimate outcome of the season.

Now sitting pretty in fifth, three points ahead of sixth-placed Sheffield United, there is every reason to be optimistic about the remainder of the festive run-in and the medium-term future of this football club. Because today, Bradford City offered all the confirmation needed that, whatever happens, we will be okay.

Because today, the final pieces of the jigsaw fell into place. Today, boys became men. Today, City banished the home demons – this time, I think, for good. Today, City became the first team of the 2014/15 season to beat a travelling Notts County – and they did it sans Yeates, Clarke and, for the most part, Andrew Davies.

Today, questions about depth were temporarily assuaged. City were superior in every single area of the park. The route has been tough, prolonged and flanked by unease, full of false-starts and wrong turns, but, in the words of Disney’s Hercules (of course), every mile has been worth their while. They have gone the distance. They have truly arrived. They are stronger for doing so. And it’s all uphill from here.

To beat a side that previously boasted the only unbeaten away record in the country was nothing short of outstanding. Much has been made of Notts County’s performances on the road – they start well, finish well, do the basics right and get little wrong in-between – and for City to beat the Magpies in the manner they did, with each and every one of them winning their individual battles, means this represents the most important victory they have attained in 2014.

Leeds United at home this was not – but it may well have been. To carry on that winning run, maintain that winning mentality, and see out their lead with such energy and spirit and control – the consequences of today will be priceless.

And none more so than for Bradford City’s Gary Liddle. Following last week’s frustrating draw with Scunthorpe United, WOAP’s Jason McKeown wrote, “Gary Liddle troublingly seemed to go missing in action. He is clearly a very intelligent player… But to date, I’ve yet to see him grab a game by the scruff of the neck and truly dominate it.” Were there a game in which the new midfield pairing needed to come out on top, it was this one. To repay the faith of their manager. To show Phil Parkinson had got a tough call right. Because until today, many believed he hadn’t.

Releasing Gary Jones was the hardest decision of Parkinson’s managerial career. Ripping out the heart and soul of the History Makers team to start completely afresh, it was the biggest statement of intent he could possibly have delivered at the close of the last campaign. Cast your mind back to when Jones scrawled his name on the dotted line, two years ago, and the romance is unavoidable: having just hit 35 and following that Rochdale bust-up with John Coleman, signing for a club like Bradford City must have been beyond anything he could ever have wished for.

I don’t think we’ll ever be able to fully comprehend the magnitude of the feats he helped to engineer; he meant everything to everyone, and every City fan fortunate enough to have watched him in the claret and amber will have a favourite Gary Jones moment, a favourite Gary Jones story. For most, the defining images will be those from the snowy Villa Park: planting a kiss on the head of brave Jake Turton after finding the cancer survivor in the crowd, screaming into the City stand behind the goal, weeping into Rory McArdle’s arms – the City love affair consummated with a glistening tear.

You wonder how he felt, today, to hear his name boomed from the Kop for one last time. To get the sending off he deserved, however belatedly; to return to the stomping ground he must have feared he’d never set foot in again. He was well and truly magic, you know. We’ll never forget Gary Jones.

Once again, thank you. A hundred times over. 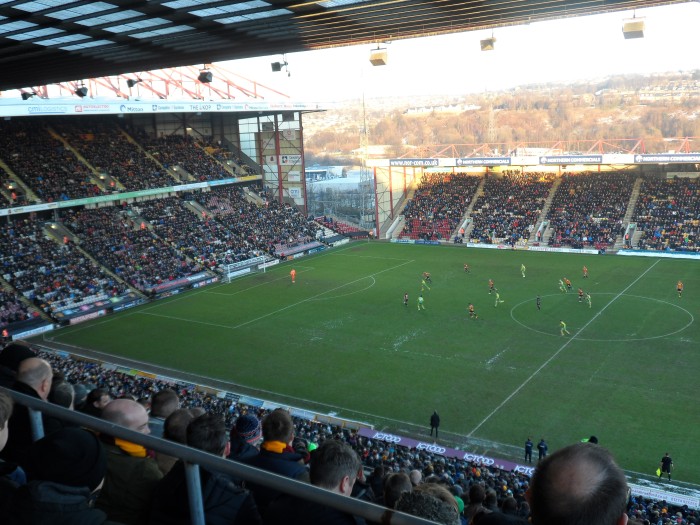 Clearly, there couldn’t have been a tougher midfielder for Liddle and Billy Knott to face. For two players who had shown glimpses of quality but been halted by inconsistency, it was important they staked a firm bid by dominating in the most important area of the pitch.

Liddle, by some distance, was the man of the match. Sitting deeper, he offered a textbook performance, screening the defence superbly, breaking up play well and playing intelligent one-twos to instigate attacks. More mobile than Nathan Doyle but matching his predecessor’s vision, he delivered a whole flush of uncompromising tackles to doggedly fortify the centre of the park and set the tone for the rest of the team.

Playing a slick through ball to Knott just on the half hour mark, his partner curled his shot just over as City hounded for the opening goal. In every sense, Gary Liddle was the true leader out there today – the leader we’ve needed him to be. In his biggest match of a fledging City career, he truly grabbed the game by the scruff of the neck, and never let go until full time.

City got the deciding goal just before the break. With Knott racing down the left flank, former FA Cup winner Roy Carroll flopped forwards and caught the Bradford ace in possession, but surrendered as James Meredith thundered down the wing to play a slick one-two for Knott to slot home.

But the most striking – and important – thing about today was the consummate professionalism with which the Bantams saw out their slim lead. Really, it should have been four or five – Andy Halliday spurned two inviting chances in the first half, once firing over an open net after rounding Carroll; a backheel from Jon Stead trickled wide and François Zoko’s yes-yes-yes-no shot clipped the post – and that left you fearing history would repeat itself as the fourth official signalled for five additional minutes.

But the outcome was never in doubt. Bar a brief moment of sitting back, City continued to take the game to the visitors, constantly pressing and pushing forwards. For that final five minutes, Valley Parade was rocking; they had found the winning formula, the way to finish ties off. Coolness, grit and guile. Faultless from beginning to end, every single one of them. 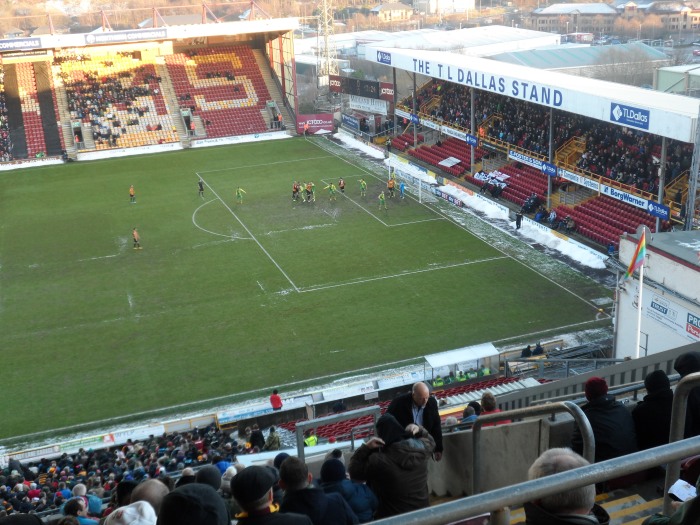 Now nine games unbeaten, this chain of wins is made all the more satisfying for the malaise that preceded it. The questions that hounded the initial transition of this team, back in September, centred on the style and mentality that Gary Jones had once been key in implementing. The unease that characterised late October and early November – that something was missing, that the style wasn’t quite working, that things just didn’t feel right – beat early season optimism to a pulp and left City struggling to rack up points at Valley Parade.

When the tally fell to five home defeats from eight games, post-Doncaster Rovers, it was unclear where the Bantams could realistically go from there. They’d lost their identity, their purpose – their Mr. Magic. Even the recent surge of optimism was tempered by the side’s (now previous) inability to see out a lead and finish well. The climb back up to infinity looked a long, harrowing and difficult one.

And now? The sky is the limit. Anything is possible. That is how the vast majority of City fans feel after today’s hard-fought three points. The second coming of Gary Liddle has blasted this team to infinity, and who’s to say they can’t go beyond? The right bodies are in the building; the right style is being implemented; the right mentality has manifested itself. This squad, though small, are at last ticking all the right boxes.

January is a massively important month. To sustain this play off challenge, City need to retain the services of Stead, Filipe Morais and Halliday – the loanees that have brought the final bit of balance to the side. The past few games have seemingly quelled the uncertainty surrounding James Hanson’s future. [ED – Though WOAP understands Huddersfield Town are seeking to recall Stead after his loan expires in January.]

It’s been a hard journey, but City have got there. And they need to keep on going. The foundations are all here now. And, unlike those tumultuous October Saturdays, you genuinely feel like everything will be just fine.

Like Loading...
‹ Oh what fun it is to see City win away (again)
The Verdict Special Edition: Half season review (part one) ›