Home › Previews › Bradford City vs Sunderland: Why this game matters to so many people

Bradford City vs Sunderland: Why this game matters to so many people 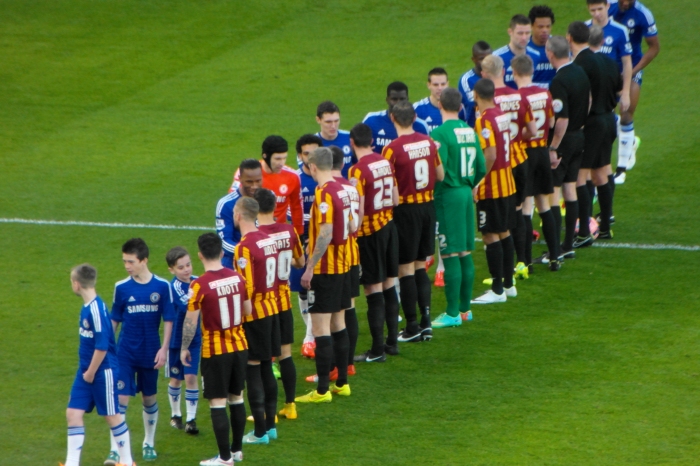 One of the most emotional football articles I have read was published on this very website. Titled “Those who care, because we care” I would advise anyone who hasn’t read to give it a look.

The article has stuck with me since its publication a year ago because I was able to relate to it on so many levels. A wonderful account of his relationship with his mother, Jason rightly discusses those fans that indirectly support the club because of us. To quote him, “These people are the backbone to our love for Bradford City, and we should always appreciate the sacrifices they so often make for us. Bradford City is a big part of their life, simply because Bradford City is such a big part of ours”.

His words came rushing back in mind last week after a gift from my mother. Coming back home after a long work week in Manchester, my mum presented me with a gift. I unwrapped it to find a framed claret and amber print with the words “Chelsea 2 Bradford 4 #everywherewego”. Around the print was a white border signed by the whole City squad. Stead, McArdle, Meredith, Davies, they were all on it.

I was genuinely lost for words. That game at Stamford Bridge is my finest moment as a fan. To now have this memento, signed by the heroes who achieved the impossible, I was close to tears. Sitting on our sofa, staring intently at the autographs, mum proceeded to tell me how she got the players to sign the gift.

Every school holiday, she used to drive me down to Rawdon Meadows to watch City train. I have an autograph book full of signatures from the Premier League squads; Beagrie, McCall, Carbone, Collymore, Locke… I have them all. All those years ago, it’s funny how she remembered that City trained on a Tuesday. With the frame in hand she drove down the Grove one more time to get me some autographs.

Poor mum waited an hour for the team to finish training. She then waited another hour whilst the players signed the frame. One by one, minute by minute. With the exception of James Hanson, she wasn’t be able to recognise any player. With this in mind, we watched the Match of the Day highlights to put faces to names.

She instantly remembered Andy Halliday and Mark Yeates. She likened the latter’s hair style to Wolverines (quite a good comparison if you ask me). She said sympathetically that “a young lad with blonde hair” didn’t want to sign the frame because he wasn’t involved with the game and didn’t feel right doing so.

Apparently Fil Morais is a “lovely chap who was really chatty” whilst the last one to sign was that “little one, Billy Potts”.

With my dad working at weekends, it was mum who often took me to games during my apprenticeship as a City fan. The last game we went together was the 3-0 defeat to Manchester United in 2001. Fourteen years since that game, she’ll be returning to Valley Parade to witness the Bantams play Sunderland in front of a record crowd.

Those who signed that print will be going into this Fifth Round tie on a high after Monday’s fantastic victory over MK Dons. The front duo of James Hanson and Jon Stead will play; the latter likely to lead the line in a solo fashion, like he did so successfully against Chelsea and the Dons. One would expect Hanson to tuck in on the left again.

Whilst I feel he’s slightly wasted out wide, I can’t comprehend a Bradford side without James Hanson. I’d argue that Hanson’s full repertoire of skills are not being fully utilised; however his work rate and sheer presence on the pitch will give Sunderland something to think about. With John Terry’s endorsements ringing in his ears, Big Jim’s role in Sunday’s proceedings will be fascinating to watch.

The ever consistent Gary Liddle will continue in the heart of the midfield with ex-Sunderland man “Potts”. Who partners these two will be an interesting call from Phil Parkinson. Billy Clarke, who scored on his return to the starting eleven on Monday, could be used in “the ten” role. His goal was well taken; however I agree with Parkinson’s assessment that it (understandably) took him a while to get into the match.

Andy Halliday may feature if Parkinson wishes for a more combative look. The Scotsman has been growing in confidence in recent weeks, and his energy and athleticism against Chelsea was a key ingredient in the victory. Finally, Mark Yeates has an outside chance.

It just shows how well this team is playing at the moment that Yeates and Clarke can’t regain their place in the side. Both were the form players prior to their injuries. If they don’t start on Sunday, I am confident that the pair will have an important role later in the match and season. Finally that “lovely chap” Morais should continue on the right. (On a complete side note, how has “All about Morais” not stuck as a chant yet?)

Ben Williams will be back in net but take a minute to think of Jordan Pickford. What will he be thinking? Do you support your parent club or the one you are presently on loan at? Does he have a chance to play for City in the next round if we were to beat Sunderland? His situation is another intriguing side story in this build up.

Jordi Gomez’s reunion with Bradford is another. It was his decisive penalty remember that was saved by Matt Duke at Wigan. The History Makers back four of Stephen Darby, Andrew Davies, Rory McArdle and James Meredith will have to be on top form to cope with the likes of Gomez, Defoe, Johnson and co.

“We all have people in our lives who don’t follow City through choice, but because of us”

When mum went to games she loved the noise, passion and atmosphere. Admittedly, her rendition of Midland Road sometimes gets mixed with Country Road; however I love how involved she gets. She may not be a regular match goer, but she is a supporter of this club. There are thousands of fans like her and I for one am thrilled that they are experiencing Sunday’s game. They deserve this occasion as much as any other City fan. Whilst they may not be on the terraces every week, they feel the triumph and gloom as much as we do!

#sowhat the BBC and BT Sport don’t want to show this game on television. They are the ones missing out. Whilst the magic maybe missing at the top level with their £5bn TV deals, it certainly will be alive in Bradford. This cup run has captured the city’s imagination and whether you are going to Valley Parade, or following the game on a radio, a smartphone or on Ceefax, we should look to embrace the event.

We are all Bradford City fans and every single one of us will be needed to push our beloved Bantams over the finish line once again.