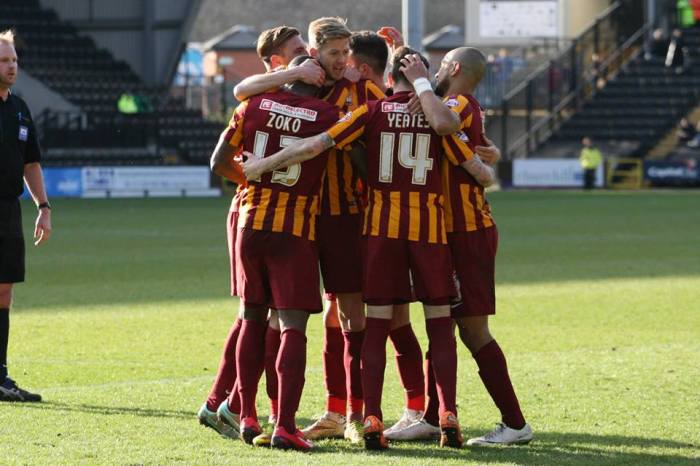 If you had one shot, or one opportunity

To seize everything you ever wanted

Would you capture it, or just let it slip?

Everyone thinks that your chance has gone. That if you were going to make the semi finals, you had to beat Reading at your place. On your pitch.

Reading said all the right things at full time, but they couldn’t fully hide their triumph over taking you back to their ground. They will believe they’ve done the hard bit, and certainly their fans seem to think so.

Everyone thinks that your chance has gone. But then everyone thought you stood no chance at Chelsea in round four. Well, you proved everyone wrong. You beat the beat team in the country on their own patch, after giving them a two goal head-start.

What is left to fear?

I swear, you may think you’re rich

You can have a million euros, but you can’t buy this

Your names will go down in history, but tonight immortality awaits. Bradford City have not reached the FA Cup semi finals for one hundred and four years. There are very few people in the world alive today the last time this club made the last four. Tonight is an I-was-there-moment.

This wonderful club has been home to so many heroes over the years. You can join them. Your names amongst the greats. You probably won’t ever have to buy a drink in Bradford anyway, but win tonight and you’ll get the keys to the city. People will name their kids after you.

You’ve done so well to get here, but you didn’t get here by settling for second best, accepting your limitations and throwing up the white flag. Don’t settle now. Don’t leave anything behind. Don’t believe that you have reached your glass ceiling. Don’t confound to everyone’s expectations.

There’s going to be a party in Reading tonight, make sure it is your party.

I spoke about wings

I wondered, I guessed and I tried

No one could have believed you’d be stood here, on the brink of history. Not when you were losing to Barnsley last October, or getting hammered by Oldham, or meekly surrendering to Doncaster.

That wasn’t you, at least it wasn’t who you are now. You’ve grown so much as a collective. Raised the bar in a way that no one else could have believed was possible.

Everyone knows about Bradford City’s 2012/13 exploits, and indeed some of you were a big, big part of it. But five months ago, all that momentum had seemingly gone. We’d lost our way. Made one too many poor signings. Lost one too many quality players. But you’ve stepped it up and then some. You’ve taken what the History Makers achieved and matched if not beaten it. You’ve turned a one-off season into an era of success.

And now you can top the lot. Get this club back to Wembley. Line up at the national stadium opposite Alex Sanchez and Mesut Özil. Play to millions of people watching on TV around the world, backed by over 30,000 City supporters who would cheer your every pass, your every tackle, your every shot on goal.

You epitomise everything they want from their football club. You have left them bursting with pride. You’ve given them experiences that they never thought were possible, and which they will remain teary-eyed about for as long as they live.

You have had an incredible impact on thousands of people’s lives, and now you can further add to that.

Where’s the glory you dreamt of as a child?

Dressed as a cowboy, your play gun pointed at real targets

Your mother, holding her tongue as your father consoles her with the words

You grew up playing football for this moment.

Everyone dreams of playing at Wembley in the FA Cup. As a kid, in your head, that pitch you played on was Wembley stadium. That kickabout game was the FA Cup Final.

You continued to live that football dream into adulthood, and you’ve been one of the privileged few who has proven good enough to make a career out of something you love.

But let’s face it, those childhood dreams gave away to the realities of lower league football many years ago. FA Cup semi final weekend has never been for the likes of you. And the chances are, you won’t get this opportunity again.

This is it. It is all or nothing. No half measures, no there’s-always-next-season. How many players, even elite players, get this sort of chance?

You’ve got to give it everything you have, because if you don’t you will never forgive yourself. It will haunt you until the day you die. If your best isn’t good enough, that is something you can quickly make peace with. But any regrets tonight will remain at the back of your mind no matter what else you go on to achieve in your career.

You beat Halifax in difficult circumstances. You beat Dartford. You beat Millwall in a replay, when everyone said that you’d blown your chance in the first game after twice losing a lead. You beat Chelsea and stunned the world. You beat Sunderland and made it look easy.

A city believes in you, and is backing you to the end. You’ve made them feel so proud. Now go out there and make them feel proud again.

Team talk written by Jason McKeown. Lyrics taken from songs written by Eminem, The Script, The Waterboys and Coldcut.