As Phil Parkinson begins his fifth season in charge of Bradford City, he appears to have gone full circle tactically when developing his side, and built the team that he tried to when he first joined the club.

When he joined the club, Parkinson took over a squad low both in confidence and ability, and immediately set about recruiting players to bolster it. Kyel Reid, Matt Duke and Jamie Devitt were his main signings, and the two outfielders became key parts of the system that Parkinson initially set up.

Against Bristol Rovers (Parkinson’s first home game in charge) City played a fluid, short-passing 4-4-1-1 with Devitt in the hole behind James Hanson. The midfield had one out-and-out winger in Reid, and one wide midfielder tucking inside and helping the central midfield in Chris Mitchell. Liam Moore, at right back, overlapped into the space created by Mitchell moving inside.

As you can see from Alex Scott’s detailed match report here, it showed initial promise, with the Bantams putting in a fine performance, but conceding soft goals and not taking their chances. His recruitment and initial games suggest that he was looking at building a side in this system.

However, as the games went on and City continued to struggle for results, Parkinson’s pragmatism took over and the system changed to a rigid, defensive, direct 4-4-2 which suited the squad he had available to him more.

There were several reasons why the attempt at 4-4-1-1 failed. Firstly, the squad was not particularly good – the defence was weak, particularly before Guy Branston was replaced by Andrew Davies, and the midfield duo, along with Mitchell, were frequently overrun. Up front, Devitt had good technique but not a huge amount of end product, and Hanson’s game was much more limited than it is now, meaning that he worked best with a pacy poacher.

As a result, City played some nice football but would frequently concede soft goals and didn’t turn possession or territory into chances.

Parkinson rebuilt his side in the summer of 2012, but by that point he had discovered that Hanson and Nahki Wells were the best strike partnership in the lower leagues, and this locked him into a front two. Even then, his major striker signing of that summer was Alan Connell, who naturally dropped off into the hole, and he started that year with Connell and Hanson as the strike pairing before Wells made himself undroppable, and locked the team into a a 4-4-2.

Some tactical ideas, particularly the midfield four with one out-and-out winger (Reid/Hines) and one wide midfielder tucking in (Thompson/Atkinson), were retained, but the system still remained quite rigid and direct, and didn’t really change until Wells was sold. This was highly successful, particularly at League Two level, but didn’t really work without Hanson and Wells as a front two.

There were occasional shifts back towards a 4-4-1-1 during the 2013/14 season, with Mark Yeates playing behind Hanson during Wells’ absence in October, but this had mixed success, with Yeates struggling for form after a promising start, and Connell had showed that he wasn’t quite good enough for League One.

When Wells left, rather than switch tactics mid-season Parkinson tried a like-for-like replacement in Aaron Mclean, but this only highlighted the importance of Wells to the 4-4-2 as Mclean struggled badly.

Parkinson’s 2014 squad rebuild was based around a diamond system. Again, this was pragmatism – he had an expensive strike force in Hanson and Mclean, and particularly needed to get the best out of Mclean, so went for the system that Mclean was used to from Peterborough.

In that respect, the diamond failed, and after Parkinson gave up on Mclean, the 4-4-1-1 made a reappearance, and led to an excellent run of form. Billy Clarke played the playmaker role, and linked well with Jon Stead up front, while Filipe Morais played as the attacking wide man on the right and Yeates, on the left, drifted in, being overlapped by Meredith.

However, when Clarke was injured, the diamond made a re-appearance and its success, particularly in cup games, meant that it became the dominant formation again.

Attempts by Parkinson later in the season to revert back to 4-4-1-1 were stymied by a lack of fit wingers – Yeates struggled with his shoulder, and Morais with his knee, and the squad, built around the narrow diamond system, had no other alternatives. 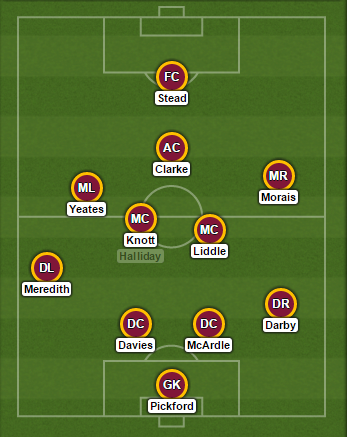 This summer has given Parkinson the greatest freedom to rebuild his squad to his ideal tactical specification since he joined, and he has built a team based around a 4-4-1-1. Unlike 2012, he isn’t locked into a Target Man-Poacher strikeforce, and he has an outstanding attacking playmaker in Billy Clarke.

He also has, in James Hanson, a fine attacking spearhead who is much more suited to this system than he was in 2011 – he’s a better technical footballer and his game is more rounded. This summer’s recruitment has also targeted wingers who fit into the system, and here Josh Morris will be key.

In pre-season he has nominally started on the left hand side but has been quite happy to drift in and attack from central areas, and James Meredith has enjoyed overlapping into the space. Meanwhile, on the other flank, Mark Marshall and Paul Anderson will take on the Kyel Reid role, backed up by a more orthodox fullback in Tony McMahon or Stephen Darby.

In many ways this team is a mirror image of that Bristol Rovers game, but with players of high enough quality to actually make the system work.

In Phil Parkinson’s time at Bradford City, his overriding philosophy has been one of pragmatism, and a willingness to work with what he has. He inherited a team that was not good enough to play a fluid 4-4-1-1, and adapted according. He had an outstanding strike pairing in Hanson and Wells, so built a very successful team around them.

He then attempted to build a side around Mclean, and even when this failed he was able to adapt his diamond system to great success. However, all the way through his time at the club, he has made attempts to shift to a 4-4-1-1 system – firstly with Devitt, secondly with Connell, thirdly with Yeates and finally and most successfully with Billy Clarke.

It’s taken nearly four years, but are we about to finally see Phil Parkinson’s original philosophy come to fruition?