The life of a Bradford City supporter #1: Growing up 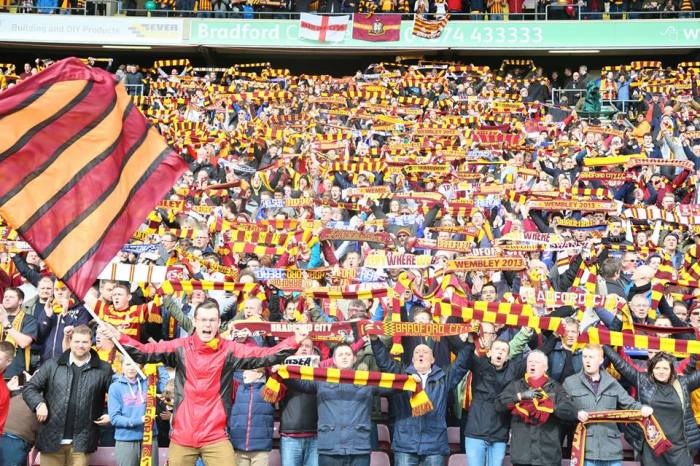 Kicking off a new, infrequent WOAP series about the culture of supporting a football team and, specifically, Bradford City, Jason McKeown looks at how life has changed through becoming a dad.

A few years ago and following a lively home defeat, I angrily departed Valley Parade and wrote a Facebook status hitting out at the referee. Upon reading my rant, a friend of mine fired off a text to me that read “I’m glad I’m not like you anymore, getting over-worked up about football results.” He had a point: the City defeat that had so enraged me was a pre-season friendly.

Football is like that for so many of us. It takes hold of you, it dominates your life. It’s both the first and last thing you think about every day. It occupies your mind when, deep down, you know that there are other, far more important matters that deserve your focus. It is a blessing, but it is also a curse.

Most of us football fans have a period where following our team becomes all-consuming and takes over everything. It affects your decision-making in other areas of life. It can damage friendships, as you place the importance of attending a game over seeing them. Sometimes it leaves you in a blind panic as someone close to you threatens to do some completely selfish, such as arrange their wedding or stag do on the same date as a home game. Rationality is a quality that escapes you for a time.

Yet although we can probably all think of one or two individuals that are so devoted to Bradford City you will literally see them at every away game for years and years, the truth for most of us is that being a fanatical City supporter comes in bursts of a few years at a time, rather than without any pauses. Our circumstances might change so that football and City are less of a priority, for a while at least. Life gets in the way. Other things start to matter. And it is during these points that our relationship with our football club becomes a little more complicated to understand.

The last two years have felt that way to me; and it has been a learning curve that I am only just figuring out. As a teenager, I had been fanatical about the Bantams, but moved away to go to University for three years and returned to West Yorkshire with other hobbies and life objectives to compete for my attention. It didn’t last, and eventually I was back to being fanatical about City again.

People often call football a soap opera, and it has similarly addictive qualities. Once you are deeply immersed in the plot, you desperately want to find out what happens next. And before long, you’re back to turning down opportunities to see friends so you can get to more games, and your outward moods fully reflects whatever City’s result was the previous Saturday.

In my late 20s and early 30s this passion for the club reached its peak. The six years of life in League Two (2007-2013) neatly coincided with my days of being a Bradford City Uber-fan. Over this period City played 320 league and cup games, and I went to 237. Not as impressive as some fans, who never miss a game, but a respectable 74% attendance rate nonetheless. For the 2012/13 history makers season I was present at 52 out of the 64 games. That’s just short of 5,000 minutes of action, including the extra time periods of the cup games that I was at, in the space of 10 months.

I was in the right place in life in order to enjoy six years of long distance trips to the likes of Plymouth, Barnet, Dagenham, Wycombe, Bristol Rovers, Swindon and Oxford. My work career was moving along decently; and married young, myself and the wife had plenty of disposable income which meant I could afford to go anywhere and nearly everywhere. I didn’t think twice about setting off from home at 7am on a Saturday and driving with my mate down the M1 or M6 to wherever City were playing. They were brilliant times, capped off by the wondrous 2012/13 double Wembley season.

But then, less than three weeks after City defeated Northampton in the play off final to earn promotion, everything changed. I became a dad for the first time, and my perspective on life was transformed. This isn’t a piece about the virtues of being a parent (if you’re interested in that sort of thing, try this that I wrote a few months back). It’s about my journey figuring out how the pieces should fit together in my new-look life.

I’d seen good friends have a kid before, some many years before me. Whilst they evidently loved their children and wouldn’t change them for the world, there was a sense of resentment too of being held back from the freedom that they previously took for granted. They couldn’t go out drinking as often, for example. And when it came to football, they went to fewer games.

Whilst I was excited when we knew that we were going to have a child, as due date began to draw nearer and City’s gripping 2012/13 season was unfolding, I worried that I might experience similar feelings of resentment too. That if being a dad meant I wouldn’t get to watch City as often, I would struggle to cope.

It has proven far easier than I thought in that respect, but tough in other ways. The first post-becoming-a-dad game was Bristol City away on the opening day of the 2013/14 season. I was there and I had a great day out; but I was riddled with guilt too, about the fact that the long distance there and back meant I wouldn’t see my daughter that day. By early November, City had played 17 games and I had been to 12 of them, but I was enjoying myself less and less. The travel to and from games took too long, given it resulted in less time spent with my little girl.

So I started to miss the occasional away game that, over the six years before, I would have attended without even thinking. And it didn’t bother me like I thought it might do. It didn’t matter in the way that missing any match would once depress me.

This has carried on ever since. From 12-15 away games per campaign, in 2014/15 I went down to eight. So far this season I have been to York and Oldham; but after Rochdale in a couple of weeks I don’t expect to go to another away game until January.

When I was a fanatical teenager first given permission to attend away games, I always struggled to understand why more City fans didn’t go on the road, and considered myself to be a superior fan for doing so. Over the last two years I have learned to understand why most supporters only go to home games and the odd away match, and had to accept that by the same logic I am no longer one of our best supporters.

That felt strange for a time and I did question myself. Do I no longer care about City as much? Am I bored of going? But in time, I now feel comfortable with where I am with about my level of dedication; and what’s more this season I have enjoyed watching City as much as I ever have.

When City were at Fleetwood recently, I spent a brilliant afternoon with my daughter at the Eureka! museum in Halifax. I would not have swapped that experience, and the memories gained from that day, for anything. The week before that, I was at Oldham and absolutely loved the day. Of course it helped that City played well and won, but even without those factors I’d have gone home in a contented mood. Contended as here was a Saturday afternoon devoted to City, and the next one would be about the young ‘un. Enjoy both for what they are. Make the most of every moment.

The lesson learned is that City are a big part of my life, but they no longer have to define it. When switched onto them I enjoy the experience of cheering the team on, watching tactical battles unfurl and developing my own opinions on the merits of individual players. But I can also switch off from it too; and unlike at first I don’t feel guilty about doing so or doubt myself into thinking I no longer care as much as I used to.

I don’t switch off from City because I’m bored or disengaged, I do it because there are so many other wonderful elements of life that I want to focus on too. I’m supposed to be teaching my daughter about the world, but she has taught me something very important too.

And so whilst I won’t be at nearly every game anymore, I continue to enjoy the ones I do go to with greater relish. Less is more, or something like that. Bradford City are still one of the first and last things I think about each day, but I’m more than happy to have acquiesced the ‘Uber’ tag to those supporters at a point in life where they can take on and revel in it.

Like Loading...
‹ Still not quite there as Bradford City undo their dominance to allow Sheffield United to roar back
Shooting for the moon ›

Categories: The Life of a Bradford City supporter