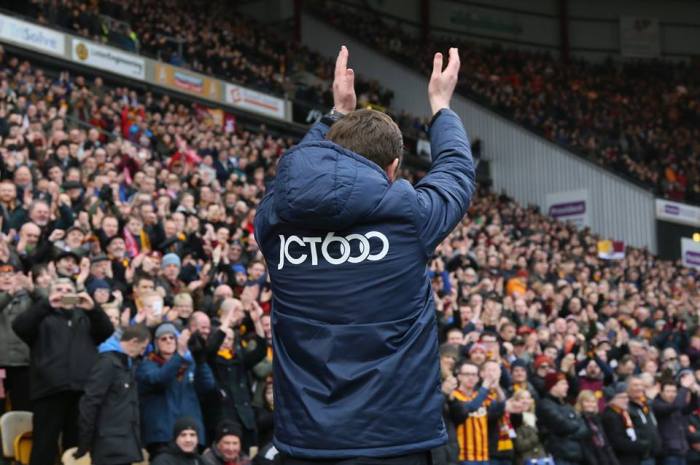 After 10 league games in charge of Bradford City – only two of which were won – some fans began to demand that Phil Parkinson be sacked as manager. They were wrong to do so.

Those calls came after a 1-0 loss at Macclesfield in October 2011 that meant City were just one point above the relegation zone. It wasn’t a quick turnaround, but after pairing up Nahki Wells with James Hanson, Parkinson was able to start guiding City away from the drop zone.

After a horrendous evening against Crawley and follow-up defeat to Plymouth, the club were heavily rumoured to have questioned whether to keep Phil Parkinson on. They were right not to make a change.

City had gained just one point in six games over Spring 2012 and saw their three best players red-carded in the dressing room after the Crawley brawl. But with six games to go, Parkinson and the players kept their nerve and picked up 10 points. They finished a lowly 18th, but we’d all feared it was going to be worse. City had successfully avoided relegation to non-league.

After a dismal run of one win in 21 matches, the pressure was growing on the club’s board to sack Phil Parkinson. Many fans demanded a change. They were wrong to do so.

During this 2013/14 period, City slumped from 4th to 16th and there were some fears of slipping into a relegation battle. Parkinson steadied the ship and the Bantams ended their first season back in League One in 11th place – a decent performance.

After winning only two out of 13 games, some fans questioned whether Phil Parkinson had taken the club as far as he can, and that he should be sacked prior to an FA Cup game with Halifax. They were wrong to do so.

City won on that November 2014 day, albeit in unconvincing fashion. Two months later they were winning at Stamford Bridge. A month after that, they would reach the FA Cup quarter finals for the first time since 1976.

At Bradford City, many of us supporters can be too quick to talk ourselves into a crisis. To allow short-term gloom to override the long-term outlook. This week is proving to be one such moment, as months of mounting frustration has boiled over. Losing 3-1 to Burton Albion last week has caused some people to snap, and with it demand radical changes.

For Phil Parkinson this is nothing new, and his four-and-a-half years at the helm should offer much needed perspective. Those four instances mentioned at the start of the article saw the club in a far worse position than they find themselves in right now. On each of those occasions, a change of manager was demanded by some, but subsequent events proved that this would have been a foolish and incorrect decision.

And that is really important right now. There’s no question that the club is under-performing. That results are not good enough. That there are issues with the squad that are having an adverse effect on the way that the season is shaping up. The style of football has regressed, and such low entertainment will be an interesting test of the Bradford public’s appetite when season tickets go on sale over the next few months.

There are some big problems to solve right now – but I can’t think of a better person to face and answer them than Phil Parkinson.

Since taking charge of the club in September 2011, there has always been two aspects to the Phil Parkinson story. There have been the good times. Wigan, Arsenal, Aston Villa, a Wembley cup final, promotion, Chelsea and Sunderland the headline-grabbers. But there have been really difficult moments too. Lots of them, in fact.

Having a manager who can guide City through these tougher times has proven absolutely vital to recent success. This club has a modern history of going through managers quickly, and often they were sacked or forced to resign after a short-term slump in results becomes a full-blown crisis. Culturally, we seem to embrace doom and gloom too quickly and too readily. The conversation around the club is often much more negative than it needs to be.

That adds up to a lot of pressure on whoever is the Bradford City manager. Others have buckled, or reacted badly to this level of negativity – souring their relationship with supporters. Parkinson has been different, and on many occasions has managed to get the club out of a dark corner by completely turning the situation around.

Why should this time be any different?

Parkinson has faced greater criticism than ever this season. Much of it is justified – he has the tools to mount a stronger promotion push, even accepting some terrible luck with injuries. The lack of cohesion and confidence in the team, going forwards at least, is something he must shoulder responsibility for. For the first time in his reign, we seem to be going backwards.

But he has faced much bigger crisises than this, and come through them. Not always quickly, not always without emerging with a few scars to show for it. His four-and-a-half years in charge have featured plenty of mistakes, but the club has continued to progress thanks to his composure, vision and ability through adversity. It is a hugely commendable quality to have, and it is something Bradford City badly need. There will always be tough times, which is why a sense of balance and assurance is so essential.

After the Burton game some people have called for him to be sacked. Some have gone much worse and by the wonderful world of Twitter labelled him clueless, out of his depth and – more than once – a wanker. After everything that Parkinson has done for Bradford City, it is hugely saddening to see such nasty abuse.

Phil Parkinson’s sacking isn’t on the agenda. His contract has more than two years to run. It would cost the club a six-figure sum to dismiss him – do we really have that kind of money? Will people accept a lower playing budget next summer to fund his dismissal? Or pay more for a season ticket to cover the costs of sacking the most successful Bradford City manager since Paul Jewell?

And it goes deeper than that, the structure of the club would be badly impacted by sacking the leader. When Lee Johnson moved from Barnsley to Bristol City last weekend, the Barnsley board stated that it was a shame but not the end of the world, as their set-up does not hinge on who is the manager. At Bradford City this is not the case. As a club we have invested a lot of time and faith in Parkinson to build the squad in the way he wants, and revamped the off-the-field set up approach. To lose that knowledge and leadership would be a major gamble.

And for what? Is this really, as some have claimed this week, as bad as it has ever been at Valley Parade? Have we forgotten what sort of state the club was in when Parkinson took over? The difficulties that Peter Jackson, Peter Taylor and Stuart McCall experienced when they were in charge? We have come a long way in a short space of time under Parkinson, and we shouldn’t willingly risk throwing away that progress simply because of a recent dip.

More than anything Parkinson deserves respect. If you think his time as manager has peaked, that he has indeed taken the club as far as he can, then let’s debate that in constructive terms. Let’s not call him clueless or tactically inept or a wanker. He doesn’t deserve such disparaging treatment, and it completely undermines any credibility to the argument that change is needed.

As they say on Game of Thrones: ‘Winter is coming’. Unless something dramatic happens, City are set for a mid-table League One finish and the debate about the manager will intensify. If we must have this argument, let’s do it in a sensible way. You can want him to go if you must, but that doesn’t mean insulting him or attempting to deride his obvious past achievements is the right and fair way to go about it.

The bottom line is that – for the first time under Phil Parkinson – City might be about to finish lower in the table than they had the year before. But in four seasons before this, he took us 37 places up the football ladder, and in the 12 seasons before that City had fallen 69 places. A bump in the road is understandable, but needn’t be the end of the world. Personally I’m backing Parkinson to rectify the current issues and for City to come back even stronger.

Like Loading...
‹ Last chance to pre-order the new Bradford City book
Phil Parkinson finds the best form of defence is to attack ›