Home › Previews › The game before the play offs, as Bradford City prepare to finish off a successful league campaign

The game before the play offs, as Bradford City prepare to finish off a successful league campaign 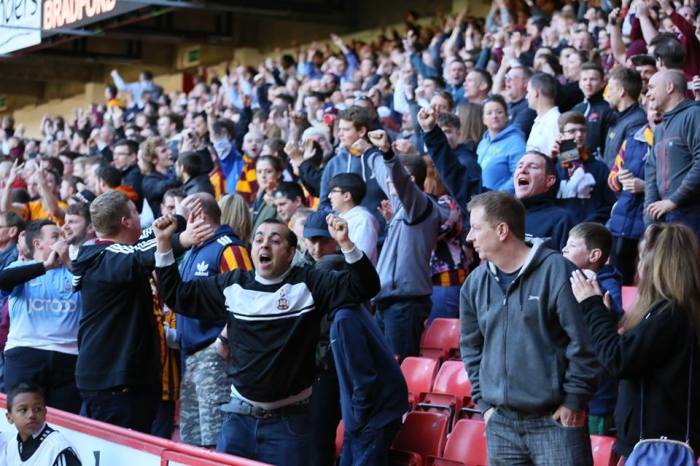 We are an extremely lucky group of football fans. We have had some outrageous success on the field recently. But there has been great success off it with the growth of fan run organisations. I’m thinking of groups such as Shipley Bantams, Bradford City Disability Football Club and Bangla Bantams. These groups are having a great impact on our community and it’s thanks to the tireless work of volunteers.

The club’s thriving media offerings is second to none. BfB, Bantams Banter, The City Gent. This website. Rival clubs look with envy at the the coverage from these websites and publications. It really is amazing. And again, they are run by supporters for supporters. People don’t get paid for doing it. As the editor of this website recently said, it felt like another job due to the amount of time he spends running the site.

I really do feel lucky that we have these people who are willing to sacrifice their time in an attempt to better the club. And last week another group was unveiled with the aim of enhancing the Valley Parade atmosphere…

The K Block Bantams have grown rapidly over the last week on social media. A newly established supporter group, they are hoping to bring a taste of European football fandom to the stands of Valley Parade. Together with the drummers in the Kop, they want to further enhance the atmosphere both around and in the ground with flags and banners in a similar fashion seen at German grounds such as the Westfalenstadion and Allianz Arena.

Speaking to representative Jake Hepworth, the group have produced nearly fifty flags and hope to double that number in Block K come Sunday. It’s worth noting that this is entirely self funded by the groups six founding members, and every flag is hand made. The group have enlisted as much as help as possible to create the flags, with Hepworth’s mum helping out with the production and design.

Whilst this is an expensive and time consuming effort, they are happy to continue in order to create an even better atmosphere at Valley Parade. All they ask is for people to get involve and return the flags once used. The group have orchestrated several displays already this season. They have received high praise from away staff for both their spectacles and conduct, with officials from Coventry City being especially impressed.

The club have already contacted the group about organising something special for the home play off tie. Hepworth was coy on the plans but no doubt whatever they come up with will help enhance what will already be a fevered atmosphere.

On the pitch, City play with the knowledge that a play off spot is secured. It’s seems unlikely that Phil Parkinson will ring unnecessary changes however knocks to messrs Hanson, Morais and Reid may force his hand to rest his most attacking trio prior to next weeks first leg.

One would expect the back five to keeps its place whilst Lee Evans, Josh Cullen and Tony McMahon are likely to make up the midfield. Josh Morris or the fit again Paul Anderson may fill the void if Reid is unable to play. The latter has Championship play off credentials and his presence in the squad highlights the strength and depth of this years class.

Up front Jamie Proctor may regain his starting spot if Hanson is declared unfit. Proctor was extremely unfortunate to lose his place in the side against Walsall and it’s ironic that both Hanson and Proctor have benefited from the others injuries and niggles. As Jason mentioned last week, Proctor’s signing looks an inspired bit of business.

Whilst Billy Clarke is in desperate need to play games in order to find his confidence of last season, one would love to see Reece Webb Foster get a run out. In form whilst on loan at Bradford Park Avenue, goals in recent reserve team games show the youngster has a natural eye for goal. Could he work his way into the manager’s plan in the play offs? A long shot I know, but what a story it would be.