The brightest of starts 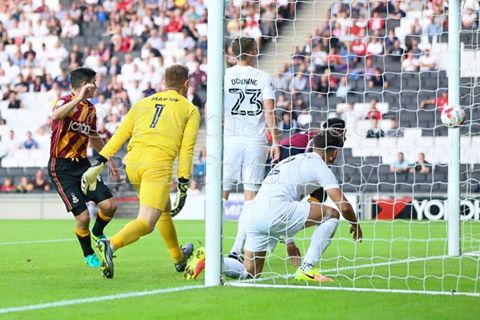 Bradford City are down to the bare bones and yet are currently playing some of their best football in more than a decade. The victory at MK Dons was the result of a seriously impressive performance. Injuries may leave them short at the back and lacking up front, but for 45 minutes they dominated and outplayed a side playing Championship football last season, and with far greater resources than the Bantams

Imagine just what Stuart McCall’s men are going to be capable of when everyone is fit.

Beating MK Dons is nothing new of course. Under Phil Parkinson, City became their bogey team and rocked up four straight league wins. No matter how bad City were and how well MK Dons were performing, they’d slip up to claret and amber. Even when City were on that dreadful 2013/14 run of one win in 21, that solitary victory came at Stadium MK.

But those Parkinson wins over Karl Robinson largely occurred because the greater grit and physicality of City was too much for the short passing style of the MK Dons. This victory by McCall’s Bradford City was different. They out-footballed a footballing side. And what on paper looked to be two tricky away games in Peterborough and the Dons has resulted in six very encouraging points.

It’s early days and so much can change, but for now we supporters should feel very positive. Within the Valley Parade suites hosting a beam-back of the game, the atmosphere was terrific and the scenes that greeted Josh Cullen and Billy Clarke’s first half goals were memorable. A good start to this season was important after the summer of upheaval, and it has helped us supporters to quickly buy into this new era.

The new signings have hit the ground running. Colin Doyle and Nathaniel Knight-Percival looked poor in pre-season but were outstanding at the back. Nicky Law’s third return to the club was met with a mixed reception, but he was excellent once again. Jordy Hiwula is making a positive contribution, his pace a real asset.

And the jewels in the crown are Josh Cullen and Romain Vincelot. Cullen’s return is a huge coup, and if anything he looks a better player than last season. Vincelot is a class act, reading the game superbly and looking so composed on the ball. These two and Law can feed off each other and drive the team on. They can be the catalyst for another promotion push.

The link up play between City’s players is really encouraging. Lots of triangles, patient passing and an intelligence to find openings. With no James Hanson, crosses into the box were never going to be successful – so time and time again City got into the area by cutting MK Dons open through passing it on the deck. They counter attacked in numbers, and have great energy in how they get up and down the pitch. The fitness levels look good.

The Dons are no mugs. They came back strongly in the second half and demonstrated what a good side they are. City were second best but still were terrific in defence. For a back five that only features one member from last season to carry on the defensive heroics is remarkable. Tony McMahon deserves a special mention. On this evidence Stephen Darby will struggle to get back in the team.

The back five were aided by another terrific display from Danny Devine in front, who belies his rookie status. The 18-year-old looks a real talent and plays with so much intelligence. Right now, he is a key player who anchors midfield and allows others to get forwards.

There is a long, long way to go. The new approach from McCall still needs to be proven over weeks and months rather than just days. But it’s incredibly exciting, and with big players to come back City should logically get better and better.

Back in Bradford the final whistle was greeted with a booming Stuart chant. The uncertainty and frustration of a summer is quickly becoming a distant memory. A club and fanbase that could have fallen apart is united again. There was a real buzz in the room tonight. Everyone headed home smiling.

Coventry visit Valley Parade on Saturday. The new look Bradford City deserves a full house. The Bradford public should get right behind this promising team.

Like Loading...
‹ How does a striker score 20 goals a season?
Bradford City’s inner strength provides bravery to out-football Coventry ›