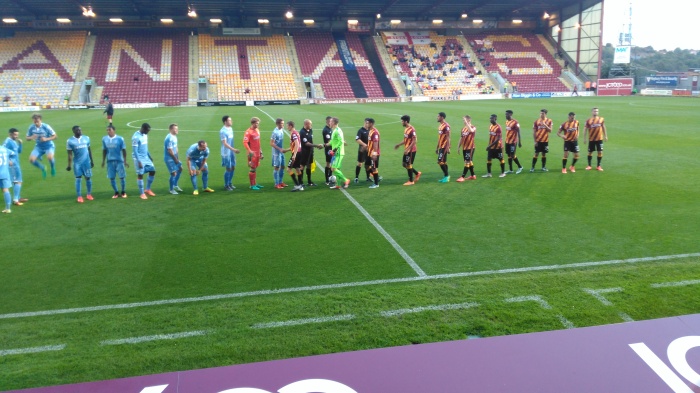 Crossing the picket line and entering Valley Parade for this controversial affair, one questioned echoed around my head. What, exactly, can we expect on the field itself?

This was an unprecedented match up. A streetwise lower league team against some of the country’s supposed best young players. Bradford City could win by four or five goals, or equally be thrashed by Stoke’s Under 23s. No one could feasibly know how this, or other similar ties around the country, would work out. And any gaping mismatch would only add to the widespread disillusionment over this sorry experiment.

But for what it’s worth, on the evidence that unfolded here tonight, the much-feared outcome of an all academy Wembley final looks less realistic. A much-changed Bantams side had enough ability to defeat a lightweight Stoke team. If those in the away blue shirts truly represent the future, it won’t fill Mark Hughes or new England boss Sam Allardyce with much confidence. And though this will be dismissed by some as a hollow Bradford City victory, it was nevertheless still a victory. A jab in the face from the lower leagues to the elite.

And on the field this was clearly a very good night for Bradford City. They were worked hard by their higher league counterparts, but were good value for their win with some strong performances all over the park.

It was competitive, it was fast paced, it was a riveting watch. Stoke’s young guns could do some clever things on the ball, but their naivety stuck out like a sore thumb and they produced numerous erratic moments where the basics were forgotten. Be it dreadful throw ins that went out for goal kicks, woeful passes that fell behind the target, or weak pot shots from crazy distances that troubled no one. Stoke’s inexperience was a hindrance and City played up to their role of wily opponents. Watching Nathaniel Knight-Percival easily wind up Oliver Shenton was one of several comical moments.

The best-known player on show, Charlie Adam, tried to lead by example and at times in the first half stood head and shoulders as the best player on the park. But there’s a reason he can’t even get a game at Stoke, and by the end he looked more like he was playing for himself than helping young team mates through an often uncomfortable night.

Adam had earlier seen a stunning acrobatic volley blocked superbly by Rouven Sattelmaier. The German had a terrific debut, producing five outstanding first half saves and dealing comfortably with balls into the box. His best save followed a jinking run and curling shot by the lively Thibaud Verlinden, which was top corner-bound until Sattelmaier tipped it over. The keeper looks a real talent.

At that stage City were second best but defended doggedly. Stephen Darby was sharp on his return from injury, and Timothee Dieng looked composed alongside Knight-Percival in the centre. In front of them, the young Danny Devine and Kwame Boateng tackled manfully and broke forwards in possession with drive and purpose.

Dieng got the game’s only goal from a header following Reece Webb-Foster’s’ devilish free kick and City should have gone on to score more. Jordy Hiwula in particular had plenty of chances and was wasteful in front of goal. There is something about him but he needs to cause more pain in the box.

The Polish striker Vincent Rabiega fared well on the wing, before injury curtailed his evening. But his replacement arguably stole the show. 18-year-old winger Ellis Hudson had a debut to remember. He looked fearless, running at people with pace and showing some great tricks on the ball. Even more impressive was his defensive work, as time and time again Hudson charged back and produced superb sliding tackles.

Hudson looks a very promising player, and on this evidence the supposed bid to sign a winger on loan should be called off. He is not necessarily ready to start, but worth a place on the bench in home games. He is a genuinely exciting talent to bring through. Another to fit Edin Rahic’s vision.

Hudson deserved a goal and almost scored when he ran clean through in the second half, causing Stoke captain Lewis Banks to haul him down for a second yellow card and sending off. When the resultant free kick from Reece Webb-Foster smacked Johnville Renee-Pringle and he fell to the floor in pain, the crowd were in stitches laughing at the unfortunate young lad. Welcome to real football, son.

And that crowd was the obvious talking point. The 1,444 attendance narrowly beats the club’s record lowest but was probably slightly better than feared. Nevertheless, it worked out at just 8% of City’s regular home attendance, down from 23% of the regular City support who saw last season’s JPT cup defeat to Barnsley. The last time City had a similarly low crowd for a JPT game was a home loss to Accrington in 2004, but even the 1,868 then was only a 23% drop on the regular crowds of the time.

With similar stories elsewhere around the country tonight, the public response to the controversial revamp of the competition is predictably dismal. And so it already seems unlikely it will be repeated next season.

So great news of course. But the final word must go to those who campaigned to boycott this game, many in an overly aggressive manner towards their fellow City fans. For many of us who went tonight, it hadn’t been a pleasant experience to be insulted and attacked simply for choosing to support our team over football politics.

We Bradford City fans never universally agree on anything, so the idea that a community of people should all fall in line and boycott this game, just because it was loudly demanded by some, is unrealistic and unfair.

I am dead against B teams in this competition and especially in the Football League, and being told that by going to this game I must support the B team notion only strengthened my resolve to go tonight. I don’t think any of us like being told what to think, and our natural reaction is to rebel. The argument that every attendee accepted this abomination is plain wrong. I wanted to watch my team, and support my club. No more, no less.

It all reminded me a bit of the EU Referendum campaign. I was pro-Remain, but the dismal tactics of the campaigners on my side to scare people with doomsday scenarios about Brexit, and to dismiss all Leave voters as racists, was unedifying and contributed to the defeat. Attending tonight does not make me and others Premier League sympathisers, nor mean it will give the green light to B teams in the Football League. Let’s stick together and fight this.

And it really is now over to the boycotters. In my opinion, the point of the woeful attendance tonight can be hammered home by having a huge crowd for the next cup game at home to Bury. What better way is there to show how unappealing B teams are than by getting the ground much fuller for the visit of the Shakers?

Like Loading...
‹ Don’t let the Premier League B teams kill the Football League Trophy
What have we learned so far? ›