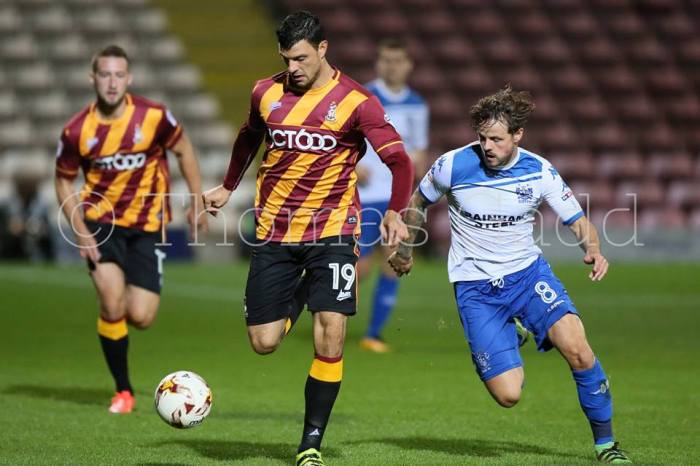 And that was that. As Timothée Dieng twisted from the centre circle and Jordy Hiwula sashayed down the right, the qualities that have marked the first two months of Stuart McCall’s second spell at the Bradford City helm were once again on display for a grand total of 1,865 people to see. Hiwula receives the ball, turns out and adroitly threads a pass to the onrushing Haris Vučkić, who meets the ball with a thumping finish angled beyond Ben Williams from close range. This was business as usual from a City side whose concerted purpose continues to stun, but their typical flair was teamed with a gnarlier edge that saw Hiwula repeatedly slash at the visitors.

On the surface, the national media will not have to work too hard to fit this game into the narrative of contempt and indifference overarching the smugness of these reforms. City swapped out Colin Doyle for Rouven Sattelmaier after three minutes, Doyle chuckling as he left the pitch to an ironic standing ovation. They filled just three spots on the bench, Tom Windle and Kwame Boateng the only two substitutions remaining after the inevitable goalkeeper switch. Bury chief David Flitcroft cracked jokes with the City fans directly behind the dugout, laughing off a handball appeal with the line, “But he only used one hand!” Couple all that with the painfully low attendance and the bylines will write themselves.

If there was an air of markedly lowered expectations, neither side approached this endeavour with contempt. Judged objectively, aside from the uproar, angst and apathy that will inevitably dominate the discourse tomorrow in view of universally plummeting attendances, this was, again, a worthwhile enough workout. Kenny Black approached this cannily: for a squad of City’s depth, still hounding that final piece of the jigsaw, they were always going to benefit from an exercise where not even their dignity was at risk.

These reforms are still ill advised, still condescending, still poorly constructed, still worthy of the backlash that has waged on and on tonight – but Bury were no pushovers, and City met the visitors’ panache with equal guile in a tightly-fought and combative contest. There were starts for McArdle, Clarke, Killgallon, Rabiega, Morais and Devine; Haris Vučkić would play the auxiliary striker to Jordy Hiwula, and former City men Greg Leigh and Ben Williams both featured for the visitors. They had their shaky moments at times, but looked sharper in the final third than they have all season.

If Billy Clarke was an early trailblazer for McCall’s methods, he must at least acknowledge the pedigree of the competition that Vučkić presents. His partnership with Hiwula was startlingly cohesive in the first half, Vučkić’s natural intelligence and ambition complementing a Hiwula who is learning to underline a striker’s instinct with a more disciplined reading of the game. At times, Hiwula played with an urgency not seen since the days of Nahki Wells, scavenging loose balls, running with a fluency that could struck out half the opposition midfield.

Bringing down a hooked ball from the left flank, Vučkić turned to find Hiwula for a goal as well taken as the first. Like Clarke, Vučkić is a technician; his influence dulled in the second half, but he ran the number ten position with alluring fluency.

The intensity was obvious, but certainly well channelled. Dieng and Devine were the key driving forces in City’s slickly oiled engine room and purred on with their trademark composure and grit; substitute Boateng initially lacked Dieng’s presence, but toiled under the stewardship of the precocious Devine. Devine ran the show at times with his trademark nonchalance, a feat impressive apart from the fact that he is just 19.

The tempo  admittedly stuttered into fits and starts in the second half, both sides fluid but favouring an approach closer to abandon. At times, Bury came within touching distance of a leveller, Andrew Tutte pickpocketing Morais on the right to fire narrowly over; minutes earlier, City had conspired to lose possession deep on the right flank and Tom Walker capitalised with a well-drilled finish. If this was the game in which City looked more likely to score than ever before, they also looked more likely to concede – there were few glaring defensive weaknesses, and Killgallon in particular looked handy, but Bury carried a potent threat of their own and looked keen to restore parity. Rory McArdle looked to lack match sharpness, but grew as the game wore on.

If there was an awareness the stakes were notably lowered, it did not manifest itself in a lax on-field display. This was an engrossing spectacle aside from the fact that Cheltenham VS Everton U21s and Wycombe VS West Ham U21s were also taking place at the same time. The intensity here was aligned closely enough to a league game, and the visit of Bury in the league in December will most likely yield a similar outcome. City continue to look smarter and smarter, and tonight’s disciplined display should serve only to bring them closer to ironing out that final infamous crease.