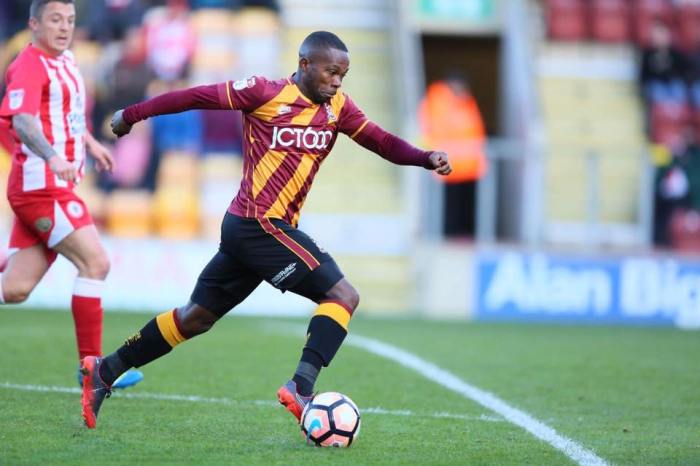 We’ve seen this before, haven’t we?  A lower division side goes to a higher league team in the cup, and through teamwork, skill, and a bigger side being off the pace, an upset happens.  It just feels a bit odd to be on the receiving end, as Accrington yet again dumped the Bantams out of a cup competition.

City gave plenty of chances to fringe players today, with six changes from the Wimbledon game, but not enough of them staked their claim for a place.  Going forward, Filipe Morais had some flashes of good play in the first half but disappeared in the second, whilst Haris Vuckic was replaced at half time.

Vuckic has quality, but it’s becoming obvious why he’s never been able to establish himself anywhere, as he vanished in spells here, and his laid-back style made it impossible for the Bantams to press as a team.  He’s been a promising youngster for too long – eventually he needs to turn that promise into something more substantial.

There were also changes to the back four, with Rory McArdle and Nathan Clarke coming in at centre back.  Unfortunately, Clarke appears to have reverted back to the nervous, hesitant defender we saw at the start of last season, and McArdle, who made some important blocks and headers, had a poor game with his distribution.

This was a common theme across the back four, with possession surrendered too easily by all of them, and none of them comfortable bringing the ball into midfield.  It’s a strange thought – before the start of the season I couldn’t imagine our defence without McArdle or Darby, but I’d now argue that none of the players who started today would make up our first choice back four.  In particular, James Meredith’s return can’t come soon enough, as his drive forward is vital to the way the team plays.

The midfield also underperformed.  Danny Devine was below par despite battling hard, while Timothee Dieng was constantly being dragged out of position by Accrington’s quick interchanges, leaving a large hole in front of the back four and space for the visitors to attack.  Mark Marshall, meanwhile, had the most threat going forward with his pace and trickery, but was sacrificed for a tactical switch to a diamond midway through the second half.

At their best this season, City have been one truly fluid team, with positional interchanges and link-up play coming easily.  Today, they weren’t one team – it was a defence, a midfield and an attack, all on the same pitch but never seeming to connect properly.  The tactical shift to the diamond and the introduction of Billy Clarke and Nicky Law sorted some of the issues going forward, but the defence never really connected with the rest of the team, meaning that the ball ended up either given away or launched at James Hanson too often.

Accrington, meanwhile, played a bit like City wanted to.  There was fluency, there were long spells of possession, there was good link up play and a cutting edge going forward.  Their first was a near-post header by Rommy Boco, while Boco set up their second with a flick to Jordan Clark who ended up 1v1 against Darby and found enough space to drive the ball into the bottom corner.  They looked like a team today, whereas City looked like a collection of individuals.

City will need to be back to playing as a coherent unit against Rochdale next Saturday.  The return of the likes of Law, Romain Vincelot, Nathaniel Knight-Percival and Billy Clarke will help.  They will deservedly walk straight back into the side, as none of the fringe players on display did anything to advance their cause – a concern, considering that we will need them in the months ahead.