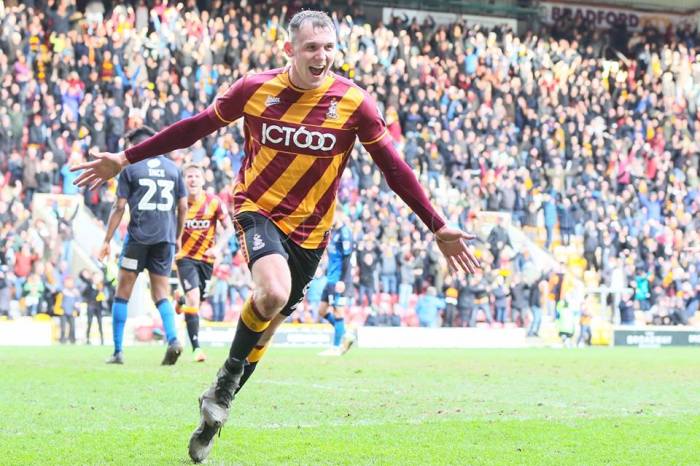 At five minutes to five, two Swindon Town supporters were stood outside the visitors turnstiles on Midland Road, with the world on their shoulders. The pair looked shell-shocked, devastated and heartbroken. The colour had drained from their cheeks.

Football can be a very cruel game.

Rewind 10 minutes earlier, and they and a smattering of other Swindon supporters would have been gnawing their nails whilst watching their team attempt to hold on for the most unlikeliest – and very possibly season-changing – of victories. Scoring late on through Nicky Ajose – one of only five shots Swindon had to the home side’s 23 – they suddenly had renewed hope of avoiding relegation.

Swindon were heavily under the cosh, but the clock was running out and frustration in the home sections was building. Tony McMahon had the chance to cross with seven team-mates in the box, but only managed to boot the ball high into the Kop. A flurry of groans and swearing was directed his way from supporters. Bradford City had seemingly self-imploded.

But football can be a truly special game.

Step forward Charlie Wyke. Bradford City’s most expensive signing since the Premier League turned this game on its head. Whisper it quietly but the January capture from Carlisle was on his longest goal drought since October. Three games had passed without his name appearing on the scoresheet. And though he had battled manfully and hit the post, the 24-year-old spent much of the afternoon struggling to escape his marker and looked set for another blank.

But goalscorers – and Wyke is undoubtedly one – are never quiet for long. With 85 minutes on the clock, Wyke got on the end of Mark Marshall’s excellent cross to powerfully head home the equaliser. It was no less than Bradford City deserved and would ensure they continued their unbeaten home record. But with other League One scores going against them, a draw still wasn’t really good enough.

The board had gone up for stoppage time when Marshall got free on the opposite flank. This time he sent over a low cross that substitute Alex Jones attempted to prod home. The ball ran free. Wyke showed wonderful feet to engineer room for a shot, and remarkable composure to bide his time for a crucial split second, before slotting the ball into the net.

Cue pandemonium amongst 17,000 home supporters, the level of which probably hasn’t been reached since the FA Cup heroics of two years ago. Wyke was mobbed by team mates as he celebrated by the corner flag. Thanks to Wyke, Bradford City are up to 4th in League One again, with the automatic spots still reachable. Swindon Town are seven points from safety with only seven games to play. The two sides above them have games in hand.

It is still relatively early days, but what a terrific signing Charlie Wyke is proving to be. He has a poacher’s instinct, is good in the air and with the ball at his feet, and has genuine intelligence. It is games like this that will quickly see Wyke rise into City folklore. The first thriving out and out goalscorer since Nahki Wells. There were even whispers of scouts being present to watch him.

It was a remarkable afternoon. For Stuart McCall, there was so much to beam about in the way his team refused to accept defeat and found the character to come back and win. That moment when Tony McMahon had messed up a cross, and the crowd turned on the team, could have been the end of them – for the afternoon at least. In my book Reinventing Bradford City, McCall talks about how the infamous 2008/09 collapse was partially triggered by fans turning on the team in an away match at Notts County during the run-in, which the players struggled to recover from.

Greater symbolism can be found in the fact it is almost exactly nine years to the day since City were thrashed 4-1 at Bournemouth in that season, prompting McCall to threaten to resign if the Bantams didn’t make the play offs. The wheels fell off spectacularly over that period, and some doomsayers had been predicting a repeat this season too. So far at least, that hasn’t happened. To date, this team have showed they are made of much sterner stuff. It could take them a long way.

And the manner of this victory will only boost team spirit. They didn’t deserve to lose to Swindon Town; but without Wyke’s two-goal heroics there would have been boos and fierce criticism at full time. This was the kind of match that – when you assess the fixture run-in – everyone ticks off as a guaranteed three points. Even accepting City habitually make a mockery of such expectations, this would have been a damaging loss. 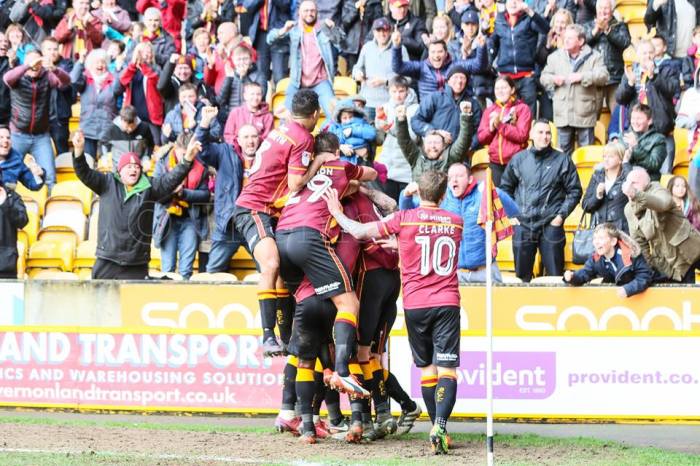 McCall sprung a surprise by adopting a 3-4-3 formation that saw James Meredith and Tony McMahon playing as wingers either side of Josh Cullen and Timothee Dieng. Behind them were three centre halves, with Romain Vincelot dropping back to play in-between Nathaniel Knight-Percival and Rory McArdle. Jordy Hiwula and Mark Marshall flanked Wyke up front.

And it worked, but it also kind of didn’t. In wide areas City were very strong. Pushing Meredith and McMahon up the park enabled them to link up effectively with Marshall and Hiwula, and they routinely doubled up on Swindon full backs to get the ball into a crossing position. Yet when they did swing it over, there simply weren’t enough bodies in the box to get on the end of things.

City bossed possession and had Swindon pinned back. The Robins’ perilous position meant they had to win the game, so they attacked with purpose too; although for the most part they had to rely on the counter attack. In every area of the pitch bar one, City completely dominated. But that one exception was the Swindon box, where Wyke was too isolated.

It became a game of City crosses. High ones, low ones, zippy ones, hanging ones. And plenty of corners too. But invariably the crosses would miss everyone, or be cleared, with only a few leading to opportunities on goal. There is a lot of academic thought out there that crossing is the least efficient way of scoring a goal. Perhaps the best example was the infamous Manchester United vs Fulham match in February 2014, where David Moyes’ beleaguered side produced a record 81 crosses but failed to win.

At times here, Bradford City proved the point that crossing can be ineffective. The approach play was a joy to watch, and it suits Hiwula and especially Marshall to play up front but in wider positions. But despite the best endeavours of Dieng and Cullen to support Wyke in getting into the box, Swindon were able to thwart most of the crosses that came in.

At least until the final five minutes. 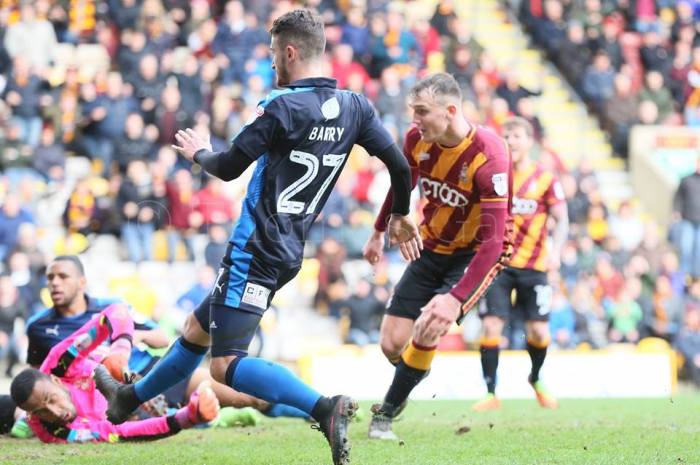 By that stage, McCall had tweaked the approach to a 4-2-1-3 formation in a bid to make City more potent, Billy Clarke and Alex Jones replacing Hiwula and Dieng. It was a smart piece of management, aided by strong performances from his substitutes.

Indeed this was by some distance Jones’ most impressive showing since his January move from Port Vale. He displayed much greater strength than previously offered, and has mastered the art of giving the marker the slip through a curved off-the-ball run into space. His turn and shot with his back to goal that flew just wide was a breathtaking piece of brilliance. He deserved a goal.

And Clarke too – for all the recent lack of form – was back towards his best. He played in the hole behind Jones, Wyke and Marshall, with McMahon and Meredith back to full back and Vincelot pushed into midfield alongside Cullen. The City captain was a lot more effective further up the field, and has so much to offer.

Despite the unrelenting pressure, it was Swindon who scored completely against the run of the play. The celebrations in the visitors’ dug out told its own story of what a big moment it was for the Robins. But there was a very late and very painful sting in the tale. This was Charlie Wyke’s day.

By the time of City’s next game – the mouth-watering trip to Scunthorpe United a week Sunday – Bolton, Millwall and Oxford will have played twice, and Fleetwood, Southend and Bristol Rovers will have also been in action. The league table on the morning of the Scunthorpe game will go a long way to telling us what the priorities should be over the final seven games: namely if the automatics could still happen, or if it’s just about cementing a play off position.

Whatever the objective, the club go into that televised encounter in buoyant mood. And with the highly potent weapon that is Charlie Wyke.

Like Loading...
‹ McCall must stick to the principles that have got City to the top six
Team Twenty campaign makes you even prouder to be a Bradford City fan ›