This game typefied this year’s City team. Nothing more so than the turning point that wasnt a few minutes after Ivan Toney had made it 2-2. After a great cushioned header at the back post, the ball dropped to Billy Clarke unmarked on the penalty spot with the goal at his mercy, who then proceeded to strike a perfectly timed half volley two yards wide. That sound of almost-laughter amongst the fans not knowing what else to do, in front of a backup drop of City players trudging backwards with their hands on their heads is this team’s leitmotif.

Sundays defeat at Scunthorpe in itself is no disgrace – they are a good team – and despite it, City remain a strong favourite for a play off spot. City in fact played well for long stretches. But no matter the positives, this team leaves you obsessing over what might have been.

At the end of the August transfer window, Stuart McCall and Greg Abbott both publicly lauded the flexibility of the squad they had assembled. However the opposition lined up, City could have a counter, and further an opposition would never be sure how City were going to set up in a given game. Today was the most glaring example of this, with McCall opting for an unconventional 3-3-1-3 to counter Scunthorpe’s main threats of narrow wingers Josh Morris and Hakeeb Adelukan. Though it must be said that despite the theory, the formation seemed to flip throughout the first half between a 5-1-4 and a 3-1-6 depending on where the ball was.

It can be argued it worked. Although City were cut open frequently on the counter, the final ball evaded the home team with City defenders clogging their passing lanes. Morris and Adelukan were anonymous. Despite this, McCall’s team appeared disorganised and uncertain, playing a formation that likely not one of them had ever played before. They threatened mainly from set pieces and counter attacks. They were the still the better team, and played well, though throughout never shaking the look of a band who sold their guitars and bought turntables, and can’t remember why.

The more you watch this team, the more this lauded flexibility seems a reaction to the manager’s lack of confidence. I’m admittedly of the Bassettian School so my opinion should be taken with a pinch of salt (read: disregarded) but with one of the division’s best wingers, a pair of in form goalscorers, and a solid frame of four-banks available, it’s curious why the manager isn’t being more assertive. City have shown time and again at the end of close games that they border on irresistible when they go direct and play through Mark Marshall.

The more you watch this division, the more you realise there is little out there to be afraid of. This isn’t a vintage division. It’s there if they want it. Stop worrying about what everyone else is doing. Shut up and play the hits. 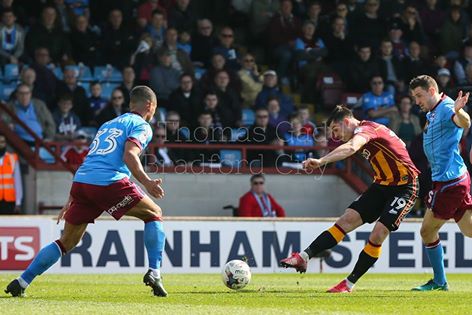 The game began with the all too familiar notes of shaky goalkeeping from crosses and a man unmarked at the far post. It’s like City’s calling card. A cartoon villain lurking ominously behind Stuart McCall ready to ruin his week at any given moment. THUD! OOOF! THWACK! 0-1! Someone dig out the Big Sam Batsignal.

This week’s calamity was especially fraught given the home side had two men standing over the dead ball, and two men held back to ward off the counter attack. City had a 9 to 5 man advantage in the penalty area. And three centre halves. And Timothee Dieng. And Charlie Wyke. Maybe it’s time to give zonal marking a try? Or no marking at all? Maybe just stand everyone on the goal line like an indirect free kick? Maybe just go for the intentional handball and take our chances from the resulting penalty? (They surely can’t be any lower?)

Anyway, one good thing about conceding an impossibly soft goal every week means that City have had to develop their resilience and they showed that in spades overturning the deficit within ten minutes. Firstly, McCalls’s mercuial nemesis did him a solid (some men just want to watch the world burn) as debutant central defender Kevin Toner was left curiously unmarked at the back stick, as if he had an invisibility cloak over his clothes, able to head in Billy Clarke’s free kick with ease.

Within two minutes, City were in front. From another Scunthorpe corner (which Doyle was able to claim) City’s joker in the pack Mark Marshall was sent careering away on the counter, the ball eventually finding it’s way to conspiracy theorist and host of The One Show Alex Jones to rifle into the bottom corner. It was the high point of an excellent performance by Jones who is quickly looking like a snip at £30,000. He is becoming an automatic starter.

The rest of the half carried on in a similar pattern to many this year with City on top, if not creating too much in the form of clear cut chances. That said the usual equilibrium was slightly upset by the sight of poor Dieng running around trying to cover a midfield often on his own. Even for a side who always look a little fragile in defence, this was a particularly death defying first half, like watching a toddler on a tightrope. They made it through the half unscathed, though with the look of a team who needed a lie down and at least one more goal to be safe.

That was reinforced in the opening stages of the second half after Ivan Toney bagged his second, suspiciously soft, strike of the afternoon. This had followed a good spell of city pressure to start the half with Marshall down the left flank.  But again, City have become used to overcoming their own frailties, and continued to be the dominant side for much of the second half.

City kept plugging away after Clarke fluffed his lines, whilst being kept on their toes by Scunthorpe counters. Clarke, turning into the skid of his own dented confidence, eschewed slipping in Jones with the goal gaping instead opting to fire straight at the defender. Luke Daniels made improbable save after improbable save.

City’s pressure culminating in a curious passage of play where the aforementioned home goalkeeper lost out in a challenge to Charlie Wyke before falling to the ground, hoping in vain for a free kick and when this wasn’t forthcoming stayed down on the floor, allowing Meredith to fire City ahead into the open goal (read: blaze the ball over the bar). This lack of composure from the League One Left Back of the Year was completely fitting with his side’s afternoon, and was the moment you realised it was to be one of those days.

Sure enough, with eight minutes of normal time to play, City managed to step on the rake with ‘Set Piece Gaffe’ emblazoned on the side, this time Dieng losing his man. Thwack! Groans. 2-3.

All of this foreshadowed ten of the more ridiculous minutes you’ll see this season. McCall responded to falling behind by sticking Dieng up front in a 4-2-4, and his team cranked out their eponymous debut with the bass turned up to 11. City could genuinely have scored five goals. They should have scored three. I will go to my grave not knowing how the defender stopped Meredith scoring from that header.

I love the grind of being a football fan, the week in week out mundanity, in the same way I love Season Two of The Wire and lose a little respect for those who skip over it for expedience (too busy having lives or something). However, if you missed the first seven months and just began paying attention to this season in the 82nd minute today, that’s about as good as a ‘Previously… on Lost” recap as you could find. Everything you’d ever need to know about this team was out there for all to see. They are a marvellous team to watch. They leave everything out there on the field. But they do it to themselves.

It is now looking like four from five for the play offs and City should still have enough about them to get themselves over the line, though this season – enjoyable as it has been – is looking likely to end up as a what might have been.

We’re now into the final six games; City are what they are. Often sublime, sometimes dominant, ultimately undone by their own frailty. This is a team to be admired, adding creation to the commitment of years past. There isn’t a better side in the division outside of Sheffield. But they have two key characteristics in their DNA: they cannot convert dominance into goals, and they cannot defend set pieces.

When the pressure rises in the play offs and the margins become thinner, they will likely be their own undoing. They do it to themselves.

Like Loading...
‹ The greatest Bradford City comebacks of all time
Rahic and Rupp are firmly winning over their Bradford City public ›