Home › The 2016/17 play offs › The play offs previewed: why Fleetwood should not be underestimated

The play offs previewed: why Fleetwood should not be underestimated 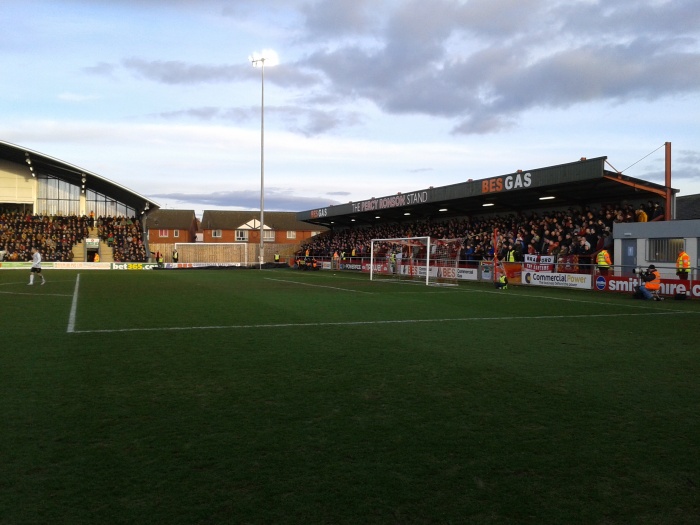 So, it’s Fleetwood.  Honestly, I was expecting Scunthorpe – I thought Fleetwood would win on the final day against Port Vale and make the rest of the results irrelevant for our game – but instead we face the Cod Army.  So, what are we facing?

The manager who might’ve been

It would have been no surprise, once Phil Parkinson had left for Bolton, to see Uwe Rösler in the home dugout at Valley Parade this season.  He was well known to our new owners, had attended a couple of games with them and was looking for work after being sacked from Leeds, but lost out to the returning hero in Stuart McCall.

As it is, Rösler ended up taking over at Fleetwood just before the start of the season following the departure of Steven Pressley, and has restored a reputation that had been damaged by the end of his time at Wigan and his short reign at Leeds.  It’s no surprise to see him linked to bigger clubs – Norwich have been linked strongly, as have Wigan, and it’s rumoured that he will be leaving Fleetwood no matter what at the end of the season.

Fleetwood’s success this season has been based on a very strong defence, conceding 43 goals all season – exactly the same as us.  In fact, their defence is incredibly similar to ours statistically – we both face, on average, just over 10 shots per game and concede a goal once every 11 shots.  The Experimental 361 website expects both sides to concede around 1.2 goals per game in terms of chances faced, so both teams’ defences stand out both in preventing shots being taken and not conceding from the shots they do end up facing.

This defence has been built on a solid back three – Ashley Eastham and Cian Bolger, signed from the reserves of Rochdale and Southend respectively, and Ben Davies, on loan from Preston.  Club stalwart Nathan Pond, who has played for the club in seven different divisions, provides cover.  We may have some luck in this department however – player of the season Bolger only lasted 15 minutes on his comeback from injury on Sunday, meaning that he’s doubtful to face us.

In goal, Alex Cairns, who trialled with City in the summer of 2015, has established himself as the number one choice after joining last summer.  Matt Urwin, who was a backup keeper for us in 2014/15, will return to a familiar role – sitting on the Valley Parade bench.

James Meredith is the best left back in this division.  He’s been selected for both the players’ and the media’s team of the season, and has won rave reviews for his performances.  But Fleetwood have someone who runs him very close in Amari’i Bell.

Bell has had a breakout season, with two goals and five assists from left wing back, and at the age of 22 is attracting plenty of interest from the higher divisions – a quick google search found articles linking him with Norwich, Aston Villa and Crystal Palace.  With only one year left on his contract, it looks like he’ll be going to the Championship with or without his teammates.

On the other side, Conor McLaughlin, signed from Preston, has picked up four goals and has also got impressive reviews.  Tactically, the back three frees both Bell and McLaughlin to push forward, and it’s worked very well indeed.

Fleetwood’s current first choice midfield consists of Huddersfield loanee Kyle Dempsey and ex Man City youngster George Glendon.  Both are 21 years old, and won’t have played in games anywhere near as big as this one.  Last year we saw Josh Cullen struggle to deal with the occasion in the play offs – could this happen to either of these two?

In fact, Fleetwood do have a very young side.  Their average age is 24.9, the fourth youngest in the division, compared to City who are joint third oldest at 27.7.  Could the extra experience of the Bantams tell?

Fleetwood have scored two more goals than us this season, but unlike the incredibly similar defences, our attacks are very different.

City have around 14 shots per game, whereas Fleetwood have just over 10.5.  However, it is no surprise to anyone following City that finishing our chances has been our achilles heel throughout the season – it takes us nearly 10.5 shots to score.  Only three teams were worse than us at this – two, Coventry and Swindon, were relegated, and one, Oldham, scored a grand total of 31 goals all season.

Fleetwood, meanwhile, are one of the most clinical sides in the division, scoring once every 7.5 shots.  Only Scunthorpe and Sheffield United are significantly better at taking their chances, although they create a lot more.

Leading the way here is David Ball, who has had the best season of his career with 14 goals.  He’s also a major creator, with seven assists.  Youngster Ashley Hunter has also had a breakthrough season, scoring 11 and creating seven, while Bobby Grant has picked up nine goals.

Providing cover is a familiar face – Devante Cole has picked up eight goals (five in the league) and has mostly been competing with Hunter for a place in the forward line.  In recent weeks it’s been Hunter who’s got the nod, and I’d expect to see Ball, Hunter and Grant lining up against us.

So, what will happen?

We cannot underestimate our opponents here.  Fleetwood have qualified for the play offs on merit, and have more recent experience of success in them, having won at Wembley in 2014.  That said, it’s a much-changed team since then, with only three players from that side likely to be involved in these games.

Judging by the statistics, I’d expect City to out-create Fleetwood over the two games.  However, it could well come down to whether we take our chances – it’s been a weakness all season, but since signing Charlie Wyke and Alex Jones in January we’ve got much better at it.

Stuart McCall’s assessment is that it’s 50-50, and I’m minded to agree with him.