Home › Opinion › What is the aim here: to build a club or to get promoted?

What is the aim here: to build a club or to get promoted? 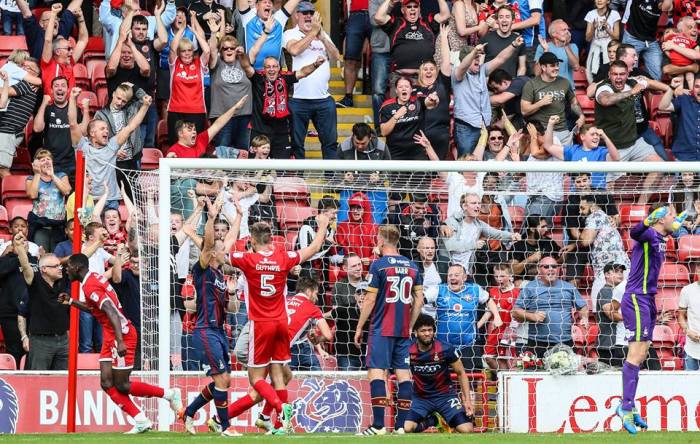 At Bradford City there remains a credibility problem. A summer of rumour and innuendo has continued into the new season, with stories swirling of a disconnect between manager and owner. Then there’s a transfer strategy that – whatever happens between now and the closing of the August window – has thrown up issues and exposed gaps. To us regular supporters, the situation appears chaotic and confusing. Half truths are given credence, and the Chinese whispers have a platform to develop.

It is still incredibly early days into the new season, but a lack of calmness amongst supporters fuels the fears of a club lurching towards crisis. A photo of Edin Rahic looking glum at Walsall flies around social media, and 2+2 = Stuart McCall is on the brink of the sack. The team’s unconvincing performances to date hint at a summer of transfer business that has left behind a weaker squad than the one which came so close to promotion last season. Everything feels disjointed, and there’s a fear that the new foundations could fall apart before they have time to settle.

As supporters, we can all take our own readings from the situation on and off the field, and we each have our own strong views on the manager and the way the players have performed so far. But perhaps what needs to bring us altogether – fans, management, players and owners – is to discuss and debate one fundamental question: what, exactly, are we trying to achieve this season?

And that comes down to whether our objectives are short or long-term. In other words, is this season meant to be an all-out assault on promotion, or about building a squad with the capability of taking the club forwards in a slower but more sustainable way? Are we as a group prepared to take a step back in pursuit of ultimately moving forwards? Or should we just look to keep pushing on, focusing on today rather than tomorrow? Is it possible to do both?

It’s not an easy question to answer. For the last 13 years we as a fanbase have harboured an ambition to get back to the Championship. Even during some dark times over the last decade we clung onto that dream. We were so close to achieving this goal last season. We could allow ourselves to believe we were on the cusp of second tier football. It was a genuine challenge for all to come to terms with another year of League One this season, never mind accepting an even longer stay.

And it also comes on the back of considerable progress on the field, with the club’s strong rise since 2012 not something anyone wants to see reversed. The scars of the past remain vivid. We learned the hard way it is easier to dip than to keep raising the bar. It is a hard sell to accept inferior results and performances this season on the premise we are building for the future. Because in the short-termism of football and poor results like at Walsall, it is very difficult to keep sight of that.

What if the new collection of players aren’t good enough to lift the club forward over the coming years? I think we’d all accept Bradford City being promoted in 2018/19 if it could be guaranteed, but blowing a 3-0 lead at Walsall underlines that nothing is ever assured in football. A well-thought out strategy is still only a strategy, rather than surefire success.

So does that mean we should be going all out for promotion? Both Edin Rahic and Stefan Rupp have at separate points over the summer gone on record stating that is the aim. League One is arguably weaker than a year ago, decent sums of money have been spent in terms of transfer fees, and the arrivals of Jake Reeves, Dominic Poleon and Shay McCartan point to a continuation of last season’s recruitment approach of targeting high-performing players from other lower division clubs.

This is not a repeat of the infamous close seasons of 2003 and 2011, when City’s public desire to target young players led to them bringing in people with no Football League experience – and a subsequent struggle. Whatever the merits of Reeves, Poleon, McCartan, Adam Chicksen and Paul Taylor, they all have proven ability at this level. It is not unrealistic to expect them to settle in quickly and deliver strong performances, rather than needing half a season to get up to speed. On this basis, another play off push shouldn’t be out of the question.

During the summer, Edin Rahic told a German website that he has a goal to bring Premier League football to Valley Parade in 10 years, and that “I’ll stay until we’re first in the league”. He admitted heavy disappointment at the way the team performed at Wembley in last season’s play off final, but was positive about the campaign as whole. “We’ve brought the club legend Stuart McCall as a new coach and found players with whom we’ve played the best football in 20 years. Attractive, attacking football, not the terrible kick and rush as before.”

Such comments seem to be geared at the long-term, and Edin has very rarely said anything that other than building over years in a sustainable manner. “We do not want to grow millions, but grow organically. With young players, who see Bradford as a jumpboard”, is a typical comment from the joint-chairmen. Assuming he really does believe in what he says, it seems he should be the last person panicking about the indifferent start to the season. They certainly aren’t the words of someone who would consider sacking McCall after a handful of games.

Put simply, you cannot allow lots of experienced, high-performing players to leave in the summer, replace them with younger players, talk about long-term sustainability, and then demand instant promotion. That doesn’t mean the club shouldn’t be trying, and it will be natural to feel disappointed if City struggle to replicate or better last season. But everyone can see that the squad isn’t as strong as a year ago, in the short-term at least. It seems grossly unfair for any of us to expect McCall to instantly make more out of less.

It matters to consider if we’re thinking short or long-term, because it should help to define how we judge this season. The aftermath of the Walsall draw saw a succession of social media posts criticising McCall, and we’ve all been down this path before. Once the window shuts especially, there will inevitably be shorter patience afforded to poor results. It could get bumpy for McCall, and that seems unfair. If the short-term outlook prevails yet the manager is working with a group of players constructed for the long-term, McCall will be unfairly judged and any push for him to leave would be unreasonable.

Because everyone knows that this is not McCall’s squad of players. He has a say in all the incomings but he’s not making decisions on his own. The Gordon Greer episode underlines this. There are no signs the wage budget has been increased on last season; yet with the welcome return of the Development Squad there are a lot more players in the building. The budget has been stretched further to accommodate all the incomings. McCall clearly has to be okay with this approach – it has been made clear from day one the route the new owners wanted to take – but in other circumstances he would probably do things very differently.

The Walsall comeback underlines this point. At 3-0 up City should have course seen out the game, and McCall’s substitutions have been blamed for the collapse. There might be truth in that, but the bench itself was very weak with very little experience and game management know-how for McCall to call upon in such a situation. So was the loss of a three-goal advantage the fault of the manager or the transfer committee?

Some fans have begun calling for McCall to go now, but by and large these are the same people who didn’t support him last season. I have no issue with anyone retaining this viewpoint, but I do question the merits of anyone turning on McCall now, based on events over the summer and at the start of this season.

McCall is a Bradford City legend, and any parting of ways this season would reflect really badly on the owners, who made an inspired decision appointing him 14 months ago. Even taking away all the emotion of what McCall means to Bradford City supporters, for a manager to leave after taking the club so close to promotion (and then after half of his team subsequently left) would be brutal. Rahic’s public comments suggests he would understand that too, and so we can only hope rumours remain rumours.

In the summer of 2016 it felt like the third era of Bantams Progressivism was at a crossroads, with the departures of Mark Lawn, Julian Rhodes and Phil Parkinson throwing doubt into the club’s ability to keep moving forwards. Edin Rahic, Stefan Rupp, Greg Abbott and Stuart McCall more than filled the void, and should be proud of what they achieved last season. But now it feels as though we have reached another crossroads. The Rahic strategy is now heavily ingrained, but the unexpectedly high number of summer departures is clearly causing disruption. Every one of the high profile departures was a Phil Parkinson signing who had contributed to the club’s rise. Only one Parkinson signing, Tony McMahon, remains. This is truly a Rahic/Rupp/Abbott/McCall Bradford City now. The transition is firmly over.

Had the club been able to retain Rory McArdle, Mark Marshall and James Meredith, coupled with the summer arrivals, a promotion push might be a more realistic expectation. But with all the upheaval, Bradford City look caught in-between trying to build a successful football team and trying to build a successful football club. That has muddied the priorities, and means strong leadership is required to prevent the new era prematurely falling apart.

If this season is about trying for promotion, but with a clear policy in place that building for the long-term is the priority, that could be a vision we can all buy into. If such an approach was to prove successful, Bradford City could ultimately make it to the Championship with a much stronger structure that can lead to further progress. After all, Bolton and Millwall – the two sides who pipped City to promotion last season – have struggled to make the step up in the Championship so far. If we’re going to get promoted just to get feebly relegated straightaway, we’ll end up in a worse position compared to getting those foundations much firmer now.

Bradford City can be a strong Championship club, and last season suggests they have the right key personnel off the field to make it happen. Edin Rahic’s vision for the future is something to be applauded, and we all need to work together to make it successful. Even if it takes longer to come to fruition than we’d like.