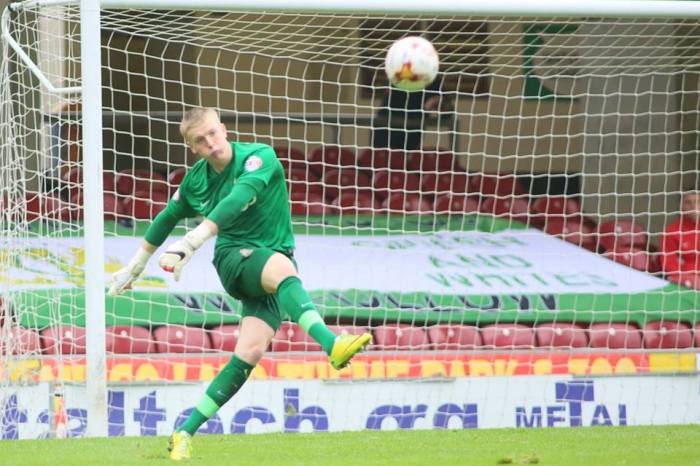 Eric Dier’s penalty had barely stopped bouncing when those of a Bradford City persuasion began teasing photographs from the brittle slip covers of the Bantams’ family photo album. Stuart McCall is the closest thing this book has to chapter markers, his haircut unchanging, defying time. There is a picture of someone who may or may not be Ed Sheeran. You can still see the sellotape from where Nahki Wells was torn out for a brief while before he ceased to be the family black sheep and was finally reinstated. And there are plenty of Jordan Pickford.

And they all, like those embarrassing teenage pictures we’ve all tried and failed to destroy, somehow found their way onto Facebook and Twitter on Tuesday night as England broke the chains against Colombia and recorded their first ever World Cup penalty shootout win. Jordan Pickford, circa 2014/15. Now he’s all grown up.

In one, he is barely sneaking into shot, about to slide to his knees as Rory McArdle coaxes the ball away from, of all people, Dele Alli. In another, he leaps furiously, his body pulled into the same swooping shape he assumed in that save from Mateus Uribe on Tuesday night that may be the most athletic of his career. His palm curled back, scooping the danger clear, just.

He looks, in some of these, like an infant. There is one that, in all likelihood, is from his Valley Parade league debut, and it is striking how fresh-faced he looks. He’s probably years off shaving. His brow is furrowed, and he nervously nibbles his lip as he trudges wordlessly to his place behind Stephen Darby, Rory McArdle, Andrew Davies and Alan Sheehan. This was his home, once, a quasi-halfway house between youth football and whatever hid beyond the horizon.

From City’s perspective, the gamble in borrowing Jordan Pickford from Sunderland for a season was, to most minds, a sizeable one, to say the least. Granted, the consternation seems almost laughable now – but City had dispensed that summer with a perfectly fine goalkeeper in Jon McLaughlin, and thrust their chips instead behind this heralded Sunderland Academy prospect who had been born a grand total of two years before Euro 96. The goalkeeper they actually owned, Ben Williams, was, ironically, living even closer to the edge, on a week-by-week contract. Phil Parkinson had pinned half of his hopes on a goalkeeper too young to legally drink in the US and the rest on a goalkeeper they’d effectively turned into a freelance.

Still, Pickford was no stranger to senior football. He’d lived a nomadic two seasons for someone still only 20, sandpapering his rough edges at Darlington, Alfreton, Burton and Carlisle – but the 14,621 who had ventured to Valley Parade that August made it comfortably the biggest crowd he had ever played in front of. Against a homeless Coventry City.

He’d been here before, in pre-season, when the distribution that would become so fabled years down the line had already begun yanking heads downfield as he sent his striker cantering downriver. City were in fine fettle this August afternoon, basking in the 1-0 lead they had taken on the half hour mark, until the stroke of half-time.

Pickford had come to meet the corner prematurely, his fingers clasping at thin air as Réda Johnson beat him to the ball and headed between two abandoned posts. Pickford was unluckier on the second, plunging low, spreadeagle like a starfish, to avert the initial shot, only to knock the ball back into Réda Johnson’s vicinity for the defender to finish, again.

It would be fair to say Pickford’s debut was a testing one, and even James Hanson’s winner at the eleventh hour had failed to genuinely stem the hand-wringing. The shoulders of most goalkeepers would have sagged after such an afternoon, and it would have been easy for Pickford’s thoughts to cloud with all the wrong things: self-doubt, resignation, images of his newly-declared nemesis Réda Johnson peering back at him with narrowed eyes from a pockmarked dartboard.

Instead, recalls City’s former goalkeeping coach Lee Butler, Pickford still went to the function at which his presence had been requested. He’d joked about taking a tin-hat. That was it. There was no crisis. “Some would have pulled out and kept their head down, but he was just laughing about it,” Butler recalled. “It was unbelievable strength of character in such a young player and that was the thing that really stuck out for me. A few could have wobbled. He was only just 20 but for someone so young to show that level of maturity and character was fantastic.”

Still, it wasn’t all plain sailing. The WOAP report from City’s visit to MK Dons, a month later, details how Pickford grew “increasingly erratic” as the Dons swarmed the City half: “The on-loan Sunderland stopper had dropped the ball from a corner moments earlier,” wrote Mark Danylczuk, and “it happened again to enable MK Dons defender Dean Lewington to turn the ball home. The Dons were tactically aware in trying to exploit Pickford’s uncertainty in the box.” As a side note, City lined up that day against, ahem, “promising Northern Ireland U19 international, Will Grigg” and Alli. So that was a good game for, erm, ‘footballers with potential’.

But as City found their feet, as a side in touch with the top six, Pickford blossomed into a commanding, all-action comic-book hero of a goalkeeper, agile as they come, floating and snapping and arrowing across his line, City’s last line of defence now their first of attack as he unleashed, with all the nonchalance of a golfer warming up at the driving range, the strikers ahead of him to spin into the path of his whirling delivery.

In a squad brimming with EFL experience – more on this later – Pickford is the only player in this England team who started at the Conference and has stopped off at every rung on the league ladder en route to Russia. Jamie Vardy and Nick Pope both skipped League One. Pickford was ridiculously thorough in his tour of these environs, graduating from the School of Hard Knocks in League One to the WWE of Tuesday night.

Where he stood, alone, like a target at a firing range, after the tautest 120 minutes, as the first two penalties barrelled past him with a ludicrous sense of ease. But then came the moment. His arched spine unbends into full stretch as he takes flight. He springs away from his line. His freshly planted right foot swerves out and he is airborne, his body spread once more as he claws a hand upwards in the swell of his leap. He had dipped a fraction of a second too early to meet Carlos Bacca’s fizzing penalty. He couldn’t change his course.

It feels inconceivable that anyone’s arm could bolt upwards so instinctively, their eyes having read the ball’s flight blindly, Pickford’s head buried directly below it. At normal speed, it almost looks too fast to be real. It’s as though his right arm tore time from space as it scissored the air. It was like watching Keanu Reeves dodging bullets in The Matrix. In a world in which Taylor Swift’s legs are insured for £26.5 million, you have to wonder what kind of numbers Pickford’s left hand started commanding the moment it averted the danger. The moment the most expensive British goalkeeper of all time became a national superstar.

Even we, the original fans – the ones who liked him before he was famous, had watched him busking in Walsall and Crawley and Colchester, had hoarded EPs of all his unreleased material – never knew he had that in his locker. Pickford had left Bradford abruptly, Gus Poyet summoning his young keeper back two months shy of the season’s end. It’s probably a tad revisionist to say City’s backline went on to drown amid pangs of longing for their estranged goalkeeper – Ben Williams was one of the stars of that season’s FA Cup run, after all – but we knew he was special. We always said. I told you, right? We all told each other. Nicky Law Senior and Martin O’Neill told each other. Butler recalls seeing Pickford for the first time, amid fierce winds at Brunton Park: “I remember watching him and thinking, this kid looks the part. He caught Phil’s eyes, as well. We thought we’d go for him in the summer.”

Certainly, MK Dons deserve more of the credit for Alli than City do for Pickford – but, as the remarkable statistics about Southgate’s squad abound, perhaps the most encouraging is that, of the 23 in this World Cup squad, only six* have never played in the EFL. That number falls to three when confined to the players who featured against Colombia: Sterling, Dier and Rashford are the odd ones out. City fans were not the only ones cooing “we taught him everything he knows” into the abyss of their respective hashtags on Tuesday night.

But still: this feeling is a rarity. Before Pickford, the last Bradford City first team player who went on to play for England was… *Drum roll* Stephen Warnock. He made his Bradford debut on 14th September, 2002. That’s almost 16 years ago. The Euro had gone into circulation nine months earlier. Atomic Kitten were in the middle of a three-week run at number one. Girls Aloud hadn’t even got together. Friends was in its eighth series. Martin Bashir was in the middle of making Living With Michael Jackson. The Championship was still called Division 2. A teenaged Jon Stead enjoyed his breakthrough season in it that year. I could go on.

In short: this doesn’t happen often. It may never happen again. Oasis will probably be back together the next time we can say an England international played first-team football for Bradford City. Reece Burke is our best hope. And, try as he might, he won’t become the first England goalkeeper in a decade – since David Seaman, against Argentina in Saint-Etienne in 1998 – to save a spot-kick in a shootout at a major tournament. As much as something indiscernible about Burke just screams ‘outfield player in goal’, he’s too late: Jordan Pickford has already written his own history.

*Those six who missed out on all the fun we have down here in the EFL are: Trent Alexander-Arnold, Ruben Loftus-Cheek, Raheem Sterling, Phil Jones, Marcus Rashford and Eric Dier.