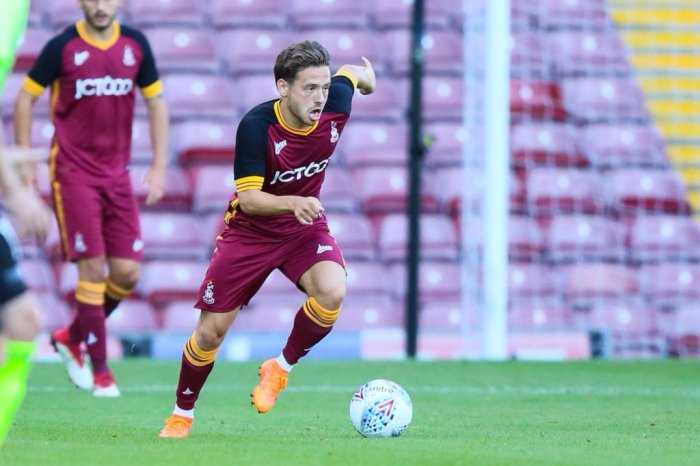 One of the big questions many supporters are asking over the first fortnight of the season is why Michael Collins persists with only one striker. The answer is Jack Payne.

The on loan Huddersfield man was one of the stellar summer signings, and his excellent debut at Shrewsbury underlined what he can offer the club. He has been less effective in the last two games, not aided by the fact opposition managers have quickly become wise to his threat and taken steps to nullify him.

Collins has been playing Payne in the hole, which undoubtedly suits his considerable strengths. He revels in finding space, inter-linking with other players and creating openings. He is impressive at keeping the ball in tight situations, and spots opportunities that even his team mates aren’t always alive to. He looks like he is operating at a level above others.

But accommodating his role into the team necessitates playing only one striker. That doesn’t mean it is a cautious approach from Collins, but all part of a plan. Around Payne, City have Hope Akpan and Josh Wright protecting the centre backs and winning possession higher up the park, wingers like Sean Scannell and Sherwin Seedorf running with the ball, and full backs joining in with attacks. The lone striker, which will usually be Eoin Doyle, is tasked with running the channels and holding up the ball. Payne, Scannell and the other widemen are instructed to get close and support him.

Building your team around Payne should allow him to thrive in his creativity, both in providing and scoring goals. City benefit from potentially having one of the best players in the division, and a talent who can unlock opposition defences.

The big dilemma is how effective it really is. Over the opening three games of the season we’ve seen the downsides as well as the potential. With only one out-and-out striker, City lack bodies in the box. Doyle or George Miller have looked isolated. If the Bantams have the ball on one flank, the opposite wideman should be getting into the box to act as second striker. That hasn’t really happened, save for one moment at Macclesfield where Seedorf raced into the area to latch onto a Scannell cross, and should have scored.

Payne looks good playing deep, but does he have the athleticism to get into the box quicker to finish off attacks? His goal at Shrewsbury suggests so, but we haven’t seen that enough yet. As for playing two holding midfielders, at times when City attack, you’re urging for one of Akpan or Wright to go forward while the other stays back.

Are Bradford City a better team by playing through Payne? Or would they be better served taking another route; one that involves two strikers? That is the big dilemma facing Collins, who needs his team to start turning promising forward play into a far greater goal threat.

The free role/number 10 role debate is not new to Bradford City. You can go back over 20 years to Chris Waddle, in the 1996/97 season. Waddle was a tremendous player at Valley Parade, and every game would produce a least one moment of magic that no one else on the field could do. But the freedom he was granted to drift around the pitch meant others had to cover for him, and ultimately relegation that season was only avoided because Waddle moved back to the Premier League and Shaun Murray came in to the team and worked harder. City went more direct, which at the time was what they needed.

Flash forward to the 2009/10 season, in Stuart McCall’s first spell as manager, and there was Chris Brandon, who in the early weeks of the campaign was tried out in a free role and performed very well. He was a good player, but the team was ineffective. McCall moved Brandon to a wide midfield role where he struggled, and ultimately he was released early by Peter Taylor.

Last season, we had Shay McCartan. A promising player, albeit someone who was seemingly fazed by the step up from Accrington. When the team tried to play through McCartan, the pace of attack was slowed. To have gotten the best out of McCartan would have involved changing the structure of the team. But, other than flashes, he didn’t show enough to suggest he was good enough to merit having a team rebuilt around him.

The deep-lying midfield/attacker hasn’t always been a failure at Valley Parade. Robbie Blake performed this role superbly over the 1998/99 season, playing just behind Lee Mills and having the season of his life. And Billy Clarke had plenty of moments where he played well in the hole, predominantly in the diamond formation used by both Phil Parkinson and Stuart McCall. Somewhere in the blurred lines, Benito Carbone certainly had games where he was devastatingly effective in the hole for City – even if he was the ultimate luxury player.

Perhaps most significant of all is the example of Alan Connell, who was signed at the start of the 2012/13 season. Although more of a striker than Payne, Connell thrived operating in the hole and at times proved to be a very eye-catching performer. But in Phil Parkinson’s history makers side of width and getting the ball forwards in a more direct style, Connell had to play second fiddle to the James Hanson/Nahki Wells partnership, which was incredibly effective. Connell actually started that season in the team, and was in some ways unfortunate not to figure more often, but the team was better suited to playing with Hanson and Wells.

If City were to go back to a conventional 4-4-2/4-3-3 formation, it wouldn’t get the best out of Payne. He wouldn’t be especially effective in a central midfield two, and though he could play out wide he lacks the pace and City have better winger options. Payne might be able to play as an out and out striker, but lacks the strength to really lead the line. A diamond formation is perhaps something to ponder.

The Payne quandary is a reflection of where Bradford City stand three games in. There are plenty of good ideas emanating from the boardroom and training ground over the club’s strategy, but is the ability, resources, know-how and patience available to make it really work?

There’s been a huge turnover of players which might mean the squad is better than last season, but is it as good as the 2016/17 side that came so close to promotion? Michael Collins is clearly full of theories and ideas, but can he can translate it into results? The head coach has gone into pre-season with a belief about playing a certain way, but the mixed results so far now throw up the challenge of whether he can adapt his ideals to deliver winning football.

Collins faces a big dilemma. He either persists with Payne in the free role, and relies on team mates better supporting and linking up City’s number 10. Or he tries a different formation – namely one that sees two strikers – that reduces Payne’s influence to the point he probably wouldn’t be a guaranteed starter. The latter route is more pragmatic, but could ultimately be required for the good of the club.

Payne should be City’s star man. He is arguably the best footballer at the club. But Collins needs to build the best Bradford City team he can from the players at his disposal. It remains to be seen if Payne would fit into that best City team.

Like Loading...
‹ Ryan McGowan: “We’re all looking at play-offs and above”
Who we are: new book explores the identity and DNA of Bradford City ›