Bradford City are back 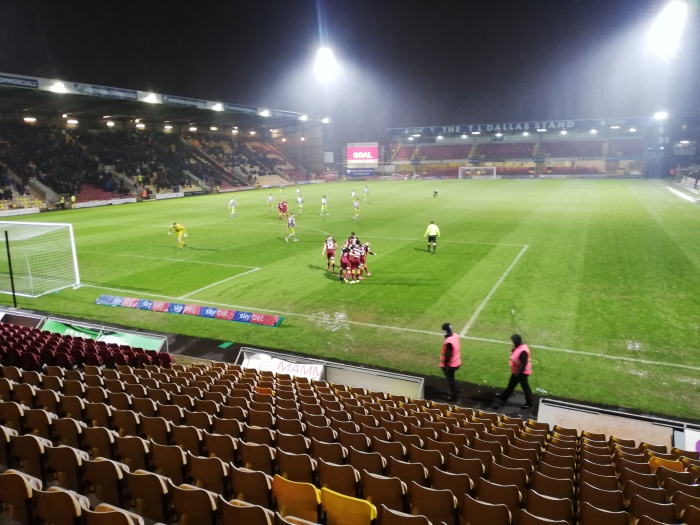 From the road to nowhere to the road to redemption. Bradford City are back. They are fighting. They are believing. And they are winning. A measure of their rate of recovery came in this confident and emphatic victory that lifts the Bantams off the foot of the table. A win against Stuart McCall’s Scunthorpe United next Saturday and they might even climb out of the bottom four in time for Christmas.

What a turnaround in fortunes. At Valley Parade it was rain-sodden, bitingly cold and the lights flickered irregularly. But over 2018, Bradford City has navigated through darker storms than this wintry afternoon. And coming through the other side has given them a sudden resilience that is reaping rewards. It certainly gave them the edge over a brittle Walsall, whose own spirit was washed away in the West Yorkshire rain.

These type of performances provide so much satisfaction. City had to work hard for it in the first half. The visitors initially had a swagger both on the field, and emanating from the away section; understandably buoyed by the midweek FA Cup victory at Sunderland, and only one defeat in the last seven league and FA Cup games. By the end, Walsall looked demoralised, dishevelled and outclassed. City wore them down.

Two crucial first half saves from ex-Saddler stopper Richard O’Donnell – including blocking an Andy Cook header when the former Tranmere striker should have scored – laid on the platform for victory. Cook also hit the bar with another gilt-edged chance. In the first half at least, City suffered from the familiar defensive jitters and better teams than Walsall would have punished the gaps between the holding Hope Akpan and his defence. That said, the central defensive triangle of Akpan, Nathaniel Knight-Percival and Anthony O’Connor produced improved displays from midweek. They always have mistakes in them, but were brave and deserved their luck.

That allowed the Bantams to go in at half time a goal to the good after smart work by Lewis O’Brien saw Paul Caddis run onto a cut back and expertly pass the ball into the bottom corner. City had worked their way into the game and were starting to win their individual battles. The goal was a reward for their endeavours.

It was fitting, too, that the opener involved two players who are the catalyst for the club’s revival. O’Brien has never let his head go down and continues to deliver accomplished displays that belie his lack of experience. What a superb signing he has proved to be. O’Brien has tremendous energy levels, is always bold on the ball and covers every inch of the pitch. Exactly the kind of player we hoped we were getting in Josh Wright.

Caddis is proving a revelation since signing a month ago. His assurance and know-how have made a real difference to the back four, and his rampaging attacking style will bring the right back more goals this season. His reading of the game is excellent. A tough man, who has leadership qualities.

It was infectious throughout the team. A second half Walsall rally was expected but never materialised. Instead City continued to play with real quality, putting the game to bed by the hour mark. David Ball’s effort at goal found the back of the net via a generous deflection – from my view in the Kop, it should probably go down as an own goal – and minutes later the on-loan Rotherham man slammed home a loose ball to make it 3-0.

Ball spoke to the media afterwards about how much he is enjoying his football, now that others are back from injury and he is free from the shackles of playing a set midfield position. It is a fair summary.

David Hopkin – who from his time at Livingston acquired a reputation of long ball manager – deserves appreciation for boldly building a team around two number 10s, in Ball and Jack Payne. Both have repaid that faith commendably and are proving great to watch linking up. This Christmas tree formation has greater longevity than the festive season.

With George Miller a menace up top. And with Kelvin Mellor doing a steady job on the right hand side. City have a team of high-performing individuals; arguably with the only exception of the inconsistent Adam Chicksen. It is a strong bench too, as demonstrated by substitute Eoin Doyle sealing the game with a fourth goal. He, and City, could easily have had more. Walsall had given up the ghost long before the end.

The league table still makes tough reading, but it is becoming easier to look at. Wimbledon and Bristol Rovers’ defeats helped City climb two places. They are now only three points off 20th place Scunthorpe, making next week’s encounter a true six-pointer. There’s a lot of work left to do, but now there is hope when before it seemed hopeless.

“We’ve got our City back” bellowed from rain drenched supporters during the game’s final knockings. Hopkin earns great credit for achieving just that, but the players especially deserve the plaudits.

Just a few weeks ago, this squad was universally loathed by supporters for their perceived lack of commitment, pride and dedication. We might have blamed Edin Rahic for such poor recruitment, but the players were copping it too. And at a time where Stephen Darby’s illness caused us all to reminisce about the great history makers team of the recent past, it only further highlighted how much the new Bradford City crop just didn’t get it.

But now, those perceptions are changing. Warmer player-crowd relationships are growing, and as fans we are once again right behind the team. Well done, to these players, for toughing it out and proving you do care after all. Now, keep it going.

How timely it was too that the club should continue coming back together with the owner present to see it.The first home league match since Edin Rahic’s departure saw Stefan Rupp take in his first game of the season. He will have noted the visible scars of his former partner’s dismal reign, such as the swathes of empty Valley Parade seats, but he will have seen the soul of the football club has endured.

He still has a job to do in stabilising Bradford City , but Rupp will have surely noted the positive impact of Julian Rhodes in steering the club and the contrast to the dictatorial and devise approach of Rahic. He will have seen in David Hopkin belated success in getting returns from the significant summer transfer investment the German funded. And Rupp will have seen a Bradford City public soaked to the skin, but full of warm devotion towards their football club.

As he surveyed the scene in the closing stages, perhaps Stefan remembered that Bradford City had defeated Walsall 4-0 at Valley Parade before. The previous occasion, in April 2016, to seal a League One play off spot, weeks before he and Rahic completed the takeover of the club.

And on that afternoon, where James Hanson netted a hat trick and Phil Parkinson was the manager, the sky shone brightly. The noise was deafening. The possibilities seemed infinite. And the potential of Bradford City was huge.

Get through these next few months, keeping the Bantams in League One, and Bradford City can be that club again. Rahic’s time may have finished. But if Rupp wants to stick at it, and this time works with the right people, at Bradford City he can still achieve what he originally intended to do.