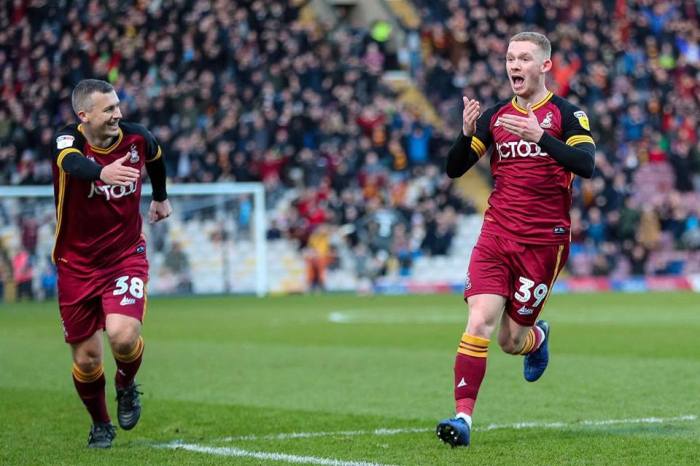 After an excellent end to 2018 Bradford City began the new year in similar fashion with a comprehensive 3-0 victory over Accrington that showed just how far this team has come from the autumn.

In the reverse fixture at Accrington, City were abject and nobody summed that up more than Nathaniel Knight-Percival.  He had the poorest game of his City career, struggling badly against Accrington’s number 9 Offrande Zanzala, and Zanzala was clearly relishing the rematch.  He tried to target Knight-Percival early on, hoping for a similarly dominant performance only to come up against a completely different player.

Every time Zanzala tried to go past him, Knight-Percival stood up and won the ball of him.  Zanzala grew visibly more and more frustrated, complaining loudly at the referee at imaginary injustices before finally lunging at Lewis O’Brien and picking up a deserved red card.  City had won the individual battles and gained a huge advantage from it, even if they did suffer the blow of O’Brien hobbling off afterwards with an injured shin.

By this stage City were already 1-0 up – a short corner was eventually worked to Lewis O’Brien on the edge of the box and he picked out the top corner for his first goal for the club.  Before this it had been an even game but the goal and the red card allowed City to take control with Eoin Doyle adding a second after excellent work from David Ball and the final pass from Adam Chicksen.

The second half wasn’t quite as dominant as some recent performances – Accrington, despite being down to ten men, tried to attack and caused some defensive problems.  However, it was still very comfortable for City – Connor Wood, on for O’Brien, hammered a third into the top corner from outside the box after half time and only an outstanding save denied George Miller.  It says something about City’s recent form that a performance and win like this was not the best produced recently – it is still miles better than anything before December.

The entire team looks completely different to a couple of months ago – Eoin Doyle now looks like the £300k striker we bought in the summer, while defenders like Knight-Percival and McGowan who were struggling now look solid.  The team swarms opponents – one moment during the second half summed this up, with Accrington trying to play out but were quickly closed down by both Miller and Wood, forcing a throw in and stopping any momentum from building.

This difference has also fed through to the stands – fans are now identifying with the team in a way that they didn’t for most of last year, and this is making matchdays much more enjoyable.  This also shows itself in the extra patience the team gets – when errors are made, they get quiet groans rather than loud boos, and players have the confidence to keep trying things without the crowd on their back.  Players with confidence play well, which in turn gets the crowd further behind them in a virtuous cycle.

There is still work to do to keep this run going, and the next 11 days before the Barnsley game will be important in terms of both recruitment and keeping hold of Jack Payne, who was again outstanding.  The team needs more depth, as the bench today showed.  But this new regime has more trust from the fans to get things right and keep the good times coming.