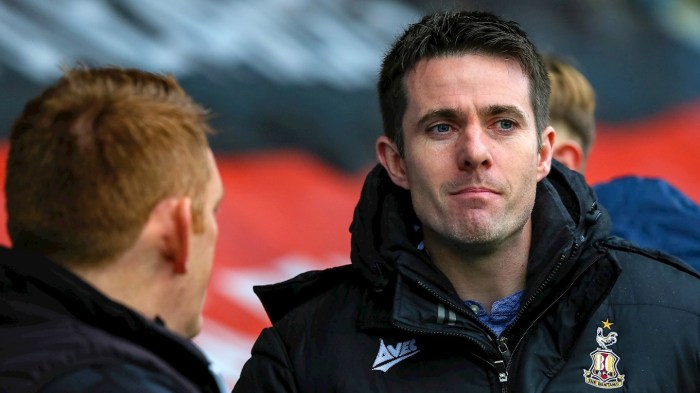 It has been clear for all to see that early December marked the beginning of a rebirth at Bradford City. The period of wholesale change which had blighted the club under the leadership of Edin Rahic came to an end on 4 December when he left the club by mutual consent. There are strong rumours that he was forced out.

In the month following his exit, City scored 14 in the league while conceding only four en route to a tally of 13 points from a possible 18. By the beginning of January, they topped the form table. Comparing this to the month prior to Rahic’s exit makes for painful reading, as City accrued just one point from a possible 12, scoring only once in a dismal spell of form.

This would seem, then, to paint a very clear picture. Free from the influence of the fantasy football dictator, Hopkin was finally allowed to play his own style of football and this new freedom paid its due dividends. Our team, long touted as talented enough on paper to be promotion contenders, were finally delivering what had been promised. Without the shackles imposed by the man who arrogantly claimed to “know football”, they were belatedly under the unfettered influence of someone who actually did.

It seems that Edin, through his departure, has achieved what he’d wanted throughout his tenure with the Bantams; the ability to take credit for our success. But perhaps even this provides the man with too much commendation. To claim our upturn in fortunes is entirely as a result of his exit discredits the intense work ethic of Bradford City’s backroom staff, and in particular the new Assistant Manager Anton McElhone.

Joining the club a day prior to Edin’s timely exit, it is easy to see why McElhone’s impact has gone mostly unrecognised by a Bantams fan base eager to celebrate having “our City back”. However, despite his understated nature and relatively quiet introduction to life at Bradford City, it seems that the signing McElhone could represent one of the biggest coups in our club’s recent history.

Having worked on the coaching staff at Tottenham Hotspur for over 10 years, McElhone is certainly no stranger to life at the highest levels of football. He played an integral part in the development of some of the games top professionals including Andros Townsend and, incredibly, Harry Kane. After a successful six-year spell as the first team’s Fitness and Reconditioning coach, he was headhunted by Brad Friedel to become the Head of Fitness and Conditioning at New England Revolution, a team valued at over three times that of Bradford City. It seems that McElhone’s career has been on a constant upwards trajectory.

Indeed, it would seem from his track record that City might present a strange career move for David Hopkin’s new number two. Graduating from the University of Edinburgh with a Masters’ Degree in Strength and Conditioning, McElhone walked into a job as a First Team Sports Scientist at Hibernian and contributed to the subsequent third and fourth-place finishes during his first two seasons at the club. He impressed during a strong three years and moved on to work in the development staff at Tottenham, specialising in fitness and conditioning with the under-21’s.

Following significant success in this role, notably his contribution to the development of future England stars Danny Rose and the aforementioned Golden Boot winner at the 2018 World Cup, McElhone would go on to spend the majority of his time at Tottenham working with the first team. The length of his time at the club is a true testament to his talent; in an era when management and backroom staff turnover is common place, McElhone remained employed through the tenure of six different managers.

After working with Brad Friedel for four years during his time at the club, McElhone was reportedly the first person he contacted to join his backroom staff when he took over at New England. Friedel would go on to comment that McElhone acted as “one of the most pivotal figures” in the process of building a fit and committed squad. During his time at both New England and Tottenham he tasked the players with a maximum body fat percentage of ten percent, to be tested once every three weeks. When he started at New England barely 20% of the team could fit this classification; by six months in that number was up to 75%.

There was a complete overhaul of how training worked under McElhone’s stewardship, with special recovery sessions being implemented on Mondays, a new “preactivation” period prior to any workout, and a strict diet plan being put in place for the players post-training meals. It was clear for all to see, as it has been at Bradford City, that McElhone’s plans have forced an improvement.

Diego Fagúndez, who has made over 200 appearances for New England Revolution and has featured in the Uruguay squad, noted that McElhone had the team “working hard” in training in order to assure that they were fit and competitive “in every game”. His focus was on the individual, with specific training, workout and diet plans being made for each player during their pre-season, specially tailored to them based on age, position and injury history among other factors.

This level of dedication highlights a man who’s formative coaching years came at the highest level of the game. City fans are already seeing the benefits of this individual approach with a fantastic, redemptive month for players such as Knight-Percival, Miller and McGowan.

George Miller has commented since McElhone’s arrival that “the training schedule has gone through the roof…..[but] you play your best football at your fittest”. Clearly McElhone’s career long fanatical fitness sessions have come through to City. To corroborate this idea, Ryan McGowan has publicly stated that under the new regime of Hopkin and McElhone “every day is 100 percent, hard training”, with sessions “harder than pre-seasons at other clubs.”

It truly does seem strange, then, that someone considered so highly within the top levels of the sport would sign on to the coaching staff at Bradford City towards the end of one of the worst calendar years in our club’s history. It appears that one of the largest factors is the friendship forged by the two men as they worked together on attaining their coaching badges. Further to this, it seems McElhone also wanted to use the club as a foray into more managerial coaching, with City representing his first opportunity as an Assistant Manager.

With such an in-depth background in sports science, fitness and conditioning and injury prevention and recovery he clearly has the tools to continue to become a key part of the management team. As the season continues Anton McElhone could well provide the magic required for the rebirth and recovery of Bradford City.