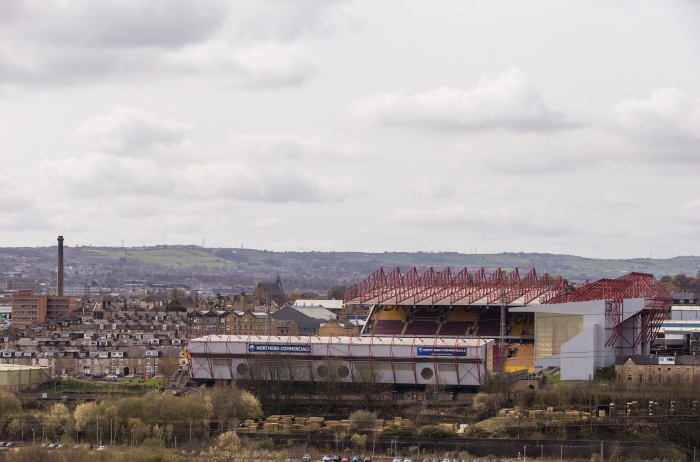 On Tuesday 21 May, Bradford City fans media groups were invited to have a meeting with representatives from the club.

The Media and PR Manager, Ryan Sparks, and Commercial Manager, Mick Shackleton, met with myself and Tim Penfold (WOAP), Mike Harrison (City Gent), John Dewhirst (Bantams Past), Aaron Bower (Bantams Heritage) and Rod Lawson (Bantams Talk). Dom Newton-Collinge and Tom Fletcher (Bantams Banter), plus Saiful Khan and Zeeshaan Tariq (BantamsVlogs) were also invited but were unable to make it. There are plans to turn these into regular monthly meetings. So, hopefully, they can all make the next meeting.

What worked well about the meeting was there was no set agenda for what we’d discuss. It was not about the club trying to ram a PR message down our throats, but an opportunity for us to dictate the conversation by asking the questions we feel fans are looking for the answers to. Naturally, some of the responses contained bits that were off the record and can’t be repeated here. There is nothing sinister and we don’t know anything ground-breaking. A lot of it is simply down to the fact the club want to manage the timing and messaging of their own announcements.

The first talking point of the night was communication and the lack of it from Valley Parade right now. The summer can always be a frustrating affair as a football fan. You’re always waiting for news of new signings, there have been no details about the kit, and the departure of Andy Todd as assistant manager has fuelled rumours the club is experiencing financial difficulties.

Myself and Rod were especially vocal in getting across our criticisms of the lack of communication, which I think was taken on board. In defence of the club, Ryan explained there will be several key announcements over the next few weeks (including the kit, pre-season friendlies and new signings). He also stressed this is still relatively early in the close season, and that the domestic football season isn’t even over yet. Gary Bowyer is on holiday. Most players are also away too.

As for Todd, it was explained that his exit was a mutual decision rather than cost-cutting, with Todd having personal reasons. Financially, the club could have made him a significantly better offer than the package he was on, to try to keep him, but decided against it. Bowyer is back from holiday next week and is going to be looking at his backroom staff then.

On the financial side, Ryan confirmed Bradford City operated with a playing budget of £4.1 million over the 2018/19 season, which ended up being the fifth highest in League One. A large proportion of the 16 players under contract will experience a contractual wage decrease because of relegation, but no one has a relegation release clause.

Stefan Rupp was last week over in West Yorkshire to discuss next season’s plans, and has agreed a player budget of £2.6 million. However, as it stands the 16 in-contract players account for £1.6 million of that budget. We can expect more outgoings to ease this wage commitment, but patience is key. Players are away on holiday and not exactly in a hurry to sort out their futures (as is standard across the football industry). Clearly moving on players is vital, otherwise Bowyer effectively has only £1 million left of his budget to sign new players. Season ticket sales for 2019/20 amounted to £1.6 million revenue.

We asked how competitive a £2.6 million budget would be in League Two, and the feeling within the club is that it should allow City to push for promotion. However, that will only be the case if Bowyer is in a position where he can recruit well. My personal view is we might need a couple of years to climb out of League Two. It’s unrealistic to expect all 16 players to leave this summer. In fact, Ryan made the point that Bowyer will view some of them as part of his plans for next season.

Stefan Rupp has injected a further £1.2 million to help the club’s debts. And if various sell-ons of previous transfer deals come off, the club’s finances will be stronger. That includes a potential promotion bonus on the Charlie Wyke transfer, if Sunderland win the play off final this weekend. The big one is Oli McBurnie, which the club retain a 15% sell-on fee for. Ryan said he has seen the paperwork that confirms the sell-on fee exists, despite the Sun’s Alan Nixon recently claiming otherwise. Any McBurnie windfall will help to plug the debts.

That brought us onto talking about Stefan, and his own commitment to the club. Stefan has every confidence in Julian Rhodes’ ability and acumen to get City back on an even keel. Ryan stated that Julian won’t leave the club until it is in a break even position. No one seems to be under any illusion over how tricky this will be – revenue takes a further hit from relegation, as City’s share of the Football League central pot of money goes down by £400k through being a League Two club. If McBurnie isn’t sold by Swansea, Rupp is committed to covering the remaining debts.

I asked how involved and interested Rupp really is. Ryan said that the City owner speaks to Rhodes almost every day, and follows results keenly from afar. He has his life in Germany and clearly isn’t about to up sticks to Bradford, but is involved with decision making.

The difficulties left behind by Edin Rahic are still clearly causing issues. Last summer Stefan and Edin had agreed a £3 million playing budget, and Stefan was kept in the dark about the £1.1 million overspend. The truth only arose in November after Rhodes’ return. There are other off the field issues caused by Edin still to be repaired.

We fed back about the loss of Bradford City’s identity and culture felt by many fans. And, without being explicit, Ryan and Mick talked about the restrictions they experienced working for Edin, and the consequences of certain decisions the former chairman took. Some of those actions have damaged that identity and the closeness many fans felt towards the club. It is going to take time to recover from this.

The identity problem of course includes the poor character of the players last season. The club are acutely aware of the widening gap between players and fans, and through social media have plans to address the problem.

Ryan painted an interesting picture of the contrast between some of the players signed last summer and the recent arrival of central defender Ben Richards-Everton. Whereas a year ago some new players signed their contract before dashing off in their car to leave Valley Parade as quickly as they could, Richards-Everton brought his family along when signing the deal. And he then spent a large amount of time standing on the Valley Parade pitch with his loved ones, taking it all in. He was in no rush to leave.

Richards-Everton is really excited to play for the club and considers it a big deal to be a Bradford City player. This is not the attitude many of last season’s signings displayed.

On other players, we asked about the latest on Tyrell Robinson and Jake Reeves. The police is still working through the case on Robinson, and there is no timeframe for how long it might take. There is every chance the situation could rumble on well into next season. The situation with Reeves is one we can’t go into publicly right now, but his fitness is progressing and the hope is he will be back for pre-season.

Bowyer has a lot of time for Reeves, and even got him involved at the end of the season by asking him to go and scout Scunthorpe United for him, prior to City’s trip to Glanford Park.

The aim is to meet with the club once a month for similar meetings. It allows us to ask questions and to also provide our feedback. It’s not a closed shop by any means, and if you would be interested in attending a future meeting get in touch. The reason that fans media representatives have been invited is simply because we have platforms that allow us to share the output with more fans.

The club are also holding three mini fans forums over the summer. And there are plans to have some sort of evening celebrating the heritage of Bradford City during July, with ex-players attending.

From chatting to others after the meeting, I think the key word is patience. Most of us supporters understand and accept the club is not in the best of shape right now, and that it’s still a huge job to fix it. But it is encouraging to hear that people working for the club recognise this too and are working to turn things around.

Ryan could have tried a PR approach of trying to convince us everything is rosy. He didn’t. It felt like he and Mick were being honest and open with us. As ever, time will tell.

It is going to be a long summer, and we probably won’t have a clear picture about what next season will look like until the middle of pre-season. Whether we will make lots of exciting new signings and push for promotion next season remains to be seen. Yet this is a time for realism. For truly rebuilding the club from the mess Edin Rahic has caused. Hopefully, the sun will be shining on Bradford City again very soon. But it is going to take time.

At WOAP we’re taking a break for the summer to concentrate on other things, namely family. We’ll be back towards the end of June to announce the 100 Most Popular Bradford City Players Of All Time. Expect coverage of the pre-season friendlies.

In the meantime, we’re delighted to be appearing at Bradford Literature Festival on Sunday 7 July. Please join me for a Q&A with Gary Jones, James Mason and John Dewhirst about the culture of Bradford City and what makes us special. Tickets are available from here.

(Oh and if you miss us over the summer, copies of Who We Are are not quite sold out yet – go here.)