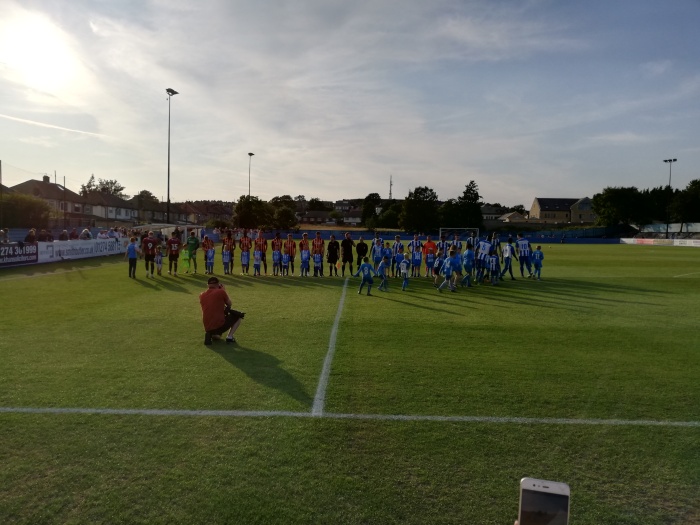 I’m not sure what the point of this was. It was great to be up at Eccleshill on a warm summer’s evening. To be supping a nice cold beer, whilst stood watching a football match, is always a treat. But it’s difficult to see what this friendly victory has contributed to Bradford City’s pre season preparations.

For the second Tuesday in a row, Gary Bowyer opted to keep his City squad rested up and bring along a team of trialists. Only youth trainee Finn Cousin-Dawson was on City’s books. The other 10 starters were complete unknowns.

It’s difficult to gauge what this high volume of trailists were really playing for here. Does Bowyer see enough gaps in his squad that he needs to consider filling every single position? Take the goalkeeper Gabriel Rosario, who kept goal for the Bantams after being released by Huddersfield at the end of last season. With Richard O’Donnell, Sam Hornby and George Sykes-Kenworthy on the books, are we really looking to sign a fourth goalkeeper?

With City having not entered a reserve league this season, there will inevitably be a challenge keeping out of favour senior players satisfied with little game time. There seems to be no obvious need to supplement the squad with reserve players nowhere near good enough to push for the first team. And it also blocks the path for City’s youngsters. A long-standing problem that really needs addressing.

It just felt like there was a lot of filler tonight. Last week at Brighouse, trialists had included Chris Taylor, Lionel Ainsworth, Andy Taylor and of course Nortei-Norty. The first three of these have Football League pedigree that made their trialist status seem sensible. They could do a job this season.

At Eccleshill, only Shaun Brisley – formerly of Notts County, Macclesfield and Peterborough – had anything approaching experience. The rest were mainly young players released by other clubs, including a couple who have been playing in non-league. Josh Ezewele, for example, signed for AFC Fylde in 2017, played just eight times and ended up being loaned out to Evo Stik Premier Division side Redditch United. He was released last summer and there is no record of him playing for anyone over 2018/19. Why we are looking at someone like this? It’s hard to see what role most of these trialists could seriously play in Bowyer’s plans.

Especially because the standard was disappointing from the team in the first half especially. It would be cruel to pick on young players who seem destined to not make it as professional footballers, so we won’t name names. Nevertheless, this was a City display littered with individual mistakes, poor passes and panicked clearances. Just one shot on target in the first half. They failed to look a cut above a hard working and determined Eccleshill United, who were sharper in the pass and keener in the tackle.

There is a caveat of course. This was a group of strangers who were always going to struggle to operate as a cohesive unit, given they’d been thrown together. It was never going to be fluid football. But still, it was pretty dismal.

It did at least improve in the second half, where City took the lead when Kelsey Mooney – a young striker released by Aston Villa – latched onto a loose ball and finished with precision. City did press better after half time, with the released Scunthorpe youngster Miracle Okafor – switched from playing down the middle to out wide – posing more of a threat. The half time introduction of Eliot Goldthorp – one of City’s own – brought more composure and ambition to the visitors. He made a big impact. And that says a lot about what our priorities in supplementing the first team should really be.

Eccleshill deservedly got an equaliser when a long range shot squirmed past Rosario. A promising through ball from Luke Wall – who played at Brighouse last week after turning out for Curzon Ashton in 2018/19 – saw Jarden Owusu-Nepaul fire wide. Eccleshill pushed hard for a second, but Okafor headed home a late City winner from a corner. If the Development Squad still existed, Okafor might be worth a punt. But for all his effort here, he’s ultimately a long way below the standard of City’s first team front line, and that includes Omari Patrick.

I seriously doubt Bowyer will want to sign anyone who auditioned here. Of course, it was never going to be an evening that led to 10 contracts being dished out. The success rate of trialists at any club is very low. But even if one or two had emerged offering food for thought, the evening would have felt more worthwhile.

In the end it felt like an exit trial game for players on the edge of falling out of the Football League, only one that was played out in front of a healthy crowd. It was enjoyable to be here and it’s always fun to rate trialists. But when it comes to truly strengthening the Bradford City squad for the season ahead, Bowyer will surely be aiming much higher than this.