The slow death of the Football League trophy 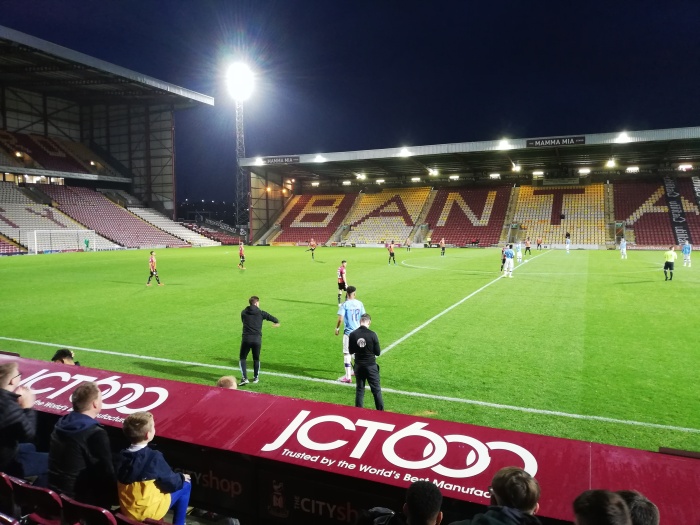 How long has this competition got before it has to be killed off? As Bradford City were deservedly beaten by an Under 21s Man City side in front of a new club record low attendance of 868, it feels like the Football League Trophy rot is setting in.

The fury and outrage over the presence of Premier League B/youth teams has started to ebb away to mere disgruntled acceptance. As though this is now normal. The boycott efforts continue, but its our own clubs who suffer through waning attendances and reduced interest.

And what is gained in return for devaluing the Football League Trophy? A bit of cash to underwrite losses staging these games, and some flimsy premise that this is somehow helping the England team. Perhaps if England win the 2026 World Cup, it will be worth it. But at what cost to lower league clubs in the meantime?

I’ve always liked this competition, and that’s why I still rock up on these increasingly souless Tuesday nights. It’s good to see fringe City players, and to watch games that don’t have as much stress attached to them as a regular league game. Unlike the FA and League Cups, there’s a good chance of a cup run that of course carries the prize of getting to Wembley. But for it all to have any real significance, these games need to matter to the opposition too.

Tonight’s game with Man City was brought forward two weeks from its original scheduling, apparently at the request of the Premier League club. It was moved to a night when Man City already had a League Cup match at Preston. So this game was even further below the Citizens’ radar than normal. I counted fewer than 50 Man City fans, and those who were there were probably family members of the youth players. I’d be surprised if Pep Guardiola even bothers to watch a video of this game.

Of course, those in Sky Blue tonight showed they have ability. They are the cream of the crop at one of the best youth set ups in the country. But the realities of professional football habitually sees very few youth players actually make it, especially at a club like Man City who spend millions of pounds on proven global stars. Most of the Man City players here will do well if they manage a career half as good as most of their Bradford City opponents tonight. It’s not a real contest. It feels articificial.

But what puts the future of this competition in even more doubt is that these B teams are getting better. This is the second time in three seasons City have faced Man City under 21s in the group stage, and this lot looked more self assured and streetwise. In victory here, Man City have almost definitely qualified for the next round.

If the Football League Trophy keeps delivering sell out Wembley finals like Sunderland vs Portsmouth last season, the Football League can argue the competition is in good health. But as soon as a B team side gets to the final, inevitably bringing a paltry following to Wembley, it really is over.

This was Bradford City’s first defeat to a B team, which in its own small way is a marker of the gradual improvements Premier League clubs are gaining from being part of our competition. Initially City had looked on course to repeat their 2-1 victory over Manchester City two years ago, after enjoying the better of the first 25 minutes and going ahead.

The goal came from unlikely skipper Hope Akpan – his first at Valley Parade – after he made a late run into the box and was left with a simple header from Zeli Ismail’s delightful cross. City had already hit the post in the early stages through McCartan’s well-drilled effort from the edge of the box.

Gary Bowyer had rang the changes but picked a decent City side. It was great to see George Sykes-Kenworthy awarded a debut in goal. The first City academy goalkeeper to be handed a first team opportunity since Ben Saynor was picked by Stuart McCall to play at Doncaster, in this competition, 12 years ago.

Sykes-Kenworthy’s inclusion ahead of Sam Hornby raised eyebrows, but it is arguably fitting reward for the promise the 19-year-old is showing. Sykes-Kenworthy has recently completed a loan spell at Guiseley where he received positive reviews. With the EFL rule that at least one member of the matchday squad must be homegrown, the progress of Sykes-Kenworthy can only boost Gary Bowyer’s options. Tonight he largely performed well.

City’s 4-4-1-1 approach saw McCartan play behind Aramide Oteh, with Omari Patrick and Ismail on the wings. The shape was decent and the home side’s greater experience was telling initially. Ismail once again took his chance well and was a constant menace, producing a range of tricks. He is up against some strong competition to start on Saturday, but must increasingly be in Bowyer’s thoughts.

The visitors equalised when Morgan Rogers was given too much space by Henley and Tyler French, with the Man City youngster finishing well from an angle. The goal gave Man City greater belief, and they began to take control of possession. Their commitment to playing out from the back very much mirroring the Pep ethos.

That greater Man City swagger continued in the second half, with the half time withdrawal of Ismail meaning City posed less of a threat. Reece Staunton had come on for Ismail to play at left back, with Longridge pushed to left winger. Just after the hour, Man City captain Tommy Doyle tapped home a low cross for 2-1.

Bowyer switched City to 3-5-2, pushing French into central midfield and introducing Jorge Sikora and Connor Morris from the bench. Patrick came close with a promising run and curling effort that flew just over. Devine had a decent shot saved. But in truth, Man City were relatively comfortable in seeing it out.

There were some mixed performances from City. Despite his goal, Akpan failed to impress and lacked influence on the game. He is a curious choice as captain given it was noticeable he never barks orders at team mates or offers encouragement. He is not a vocal player and isn’t exactly setting an inspirational example to others, so why entrust him to be leader?

French – who given Ben Richards-Everton’s upcoming suspension has a chance of breaking into the team – looked a little rash and lacking in composure. He isn’t ready just yet. Whilst both playing okay, neither Henley or Longridge will trouble the full back slots based on this. Oteh was also slightly disappointing.

It all leaves City’s Football League Trophy campaign hanging on the last group game against Rochdale, where a win will take them through. But it’s hard to really care that much. It won’t exactly be a packed out affair. For three years in a row now, City have set new record low attendance records. The pattern is evident.

This was always an unloved and unglamorous competition. Now it’s increasingly a shell of what it should be. Slowly being killed from inside by the Premier League force that the Football League seemingly has no courage to stand up to.

And at time when those in the game are speculating of more clubs to follow Bury, it’s doesn’t feel viable that lower league football clubs can continue running a competition that its loyal public is turning its back on. At least for much longer.

Like Loading...
‹ The midfield solution
On the road again as buoyant Bradford City travel to Scunthorpe United ›