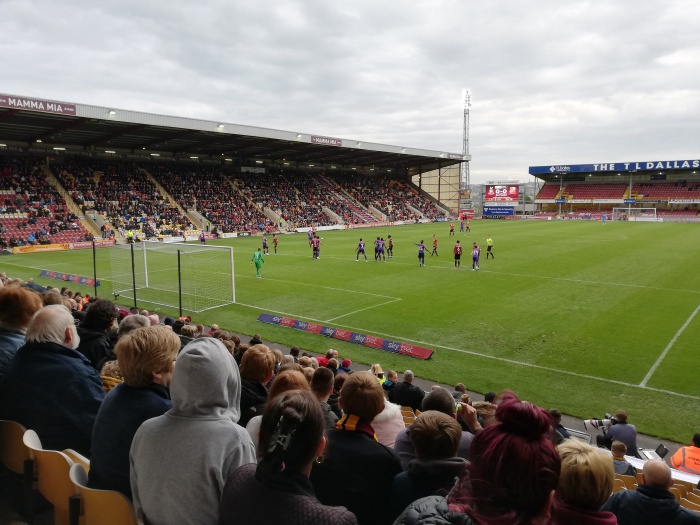 Bradford City produced their best performance of the season to secure three points against fellow promotion contenders Swindon.  Most impressively, they did this whilst missing key players, and it was a fringe player brought in from the cold that set them on their way.

Two missing key players – James Vaughan and Matty Palmer – meant that Gary Bowyer changed the team’s shape from 4-4-2 to 4-3-3.  Clayton Donaldson was the central frontman, flanked by Dylan Connolly and Zeli Ismail, while Harry Pritchard moved infield alongside the recalled Hope Akpan, with Callum Cooke sitting behind them and given the responsibility to dictate play from deep.

The revamped system by and large worked.  Cooke had a quietly impressive game, showing good intelligence in possession, keeping the ball moving and breaking play up when he had to.  Ahead of him, Pritchard had the most responsibility in getting forward to support Donaldson while Akpan played a more box-to-box role.  Freed of being asked to stay positionally disciplined, Akpan had one of his most impressive games in a City shirt.  As a result, City won the midfield battle and dominated possession, while Swindon couldn’t really break out of their own half for much of the game.

This dominance in the first half led to chances, but nothing particularly clear.  The front three worked fairly well – Donaldson held the ball up, hassled defenders and generally led the line unselfishly, but there was a lack of end product from City’s creators.  Too many crosses were overhit or underhit, and City needed a plan B when crossing didn’t work.

Dylan Connolly in particular, while working hard and committing defenders, did not create enough openings, although on the other flank Zeli Ismail caused more problems and came closest to breaking the deadlock when he struck the post.

The second half followed the same pattern as the first – City on top, Swindon only threatening sporadically – but the Bantams were coming closer to breaking the deadlock.  Connolly sparked to life with one run and pass to Ismail, but while Donaldson converted the cross he was offside.  Ismail, however, was starting to fade, and Shay McCartan was ready on the touchline when City finally broke the deadlock.

It was a sloppy piece of play from Swindon, allowing Harry Pritchard to nip in and intercept a throw in, then find Donaldson.  The veteran striker wriggled free of two defenders and hammered a shot towards goal which the visitors’ keeper Luke McCormick could not hold on to, and it was Akpan who followed up to head the rebound into the net.  Finally, City had the lead that their control of the game deserved.

At this point you would hope that the Bantams could see out the game comfortably, but it was never going to be that easy.  City sat back and Swindon sparked into life, with Lloyd Isgrove curling one shot over before a slip from Paudie O’Connor left Jerry Yates in too much space to bag an equaliser.  From being in control, the game was suddenly slipping away.

Maybe it would’ve done, if this was last season’s team.  But this team is made of stronger stuff, and they got themselves back in front shortly afterwards.  Shay McCartan, another almost forgotten man, took a low shot from outside the box that deflected slightly, then went in off the post.  It was his first goal at Valley Parade in 20 months and will have provided some catharsis after an injury-hit campaign so far.

And this time, City didn’t let it slip, despite Yates missing another good opening.  They almost had another in stoppage time, with the ever-willing Connolly forcing an error and charging in on goal, but his square pass was just slightly under hit and a defender just got to the ball before McCartan slid it into an empty net.

This was, in many ways, City’s most convincing performance of the season.  Apart from a couple of wobbles near the end they did not really look troubled by Swindon, and the midfield three allowed them dominance of proceedings that they haven’t really managed in other games.

Akpan in particular stood out, simply because this performance was so different to most of his others. He seems more suited to a box-to-box role than being the disciplined holder – his best form for Burton came in a similar role, where he had someone sitting behind him and allowing him to break forward.

Now, instead of being a player or two short of a strong team and trying to cover weak spots, Gary Bowyer has a much better dilemma, a dilemma that all promotion chasing teams want – how to fit the likes of Vaughan, McCartan and hopefully Palmer into this team.