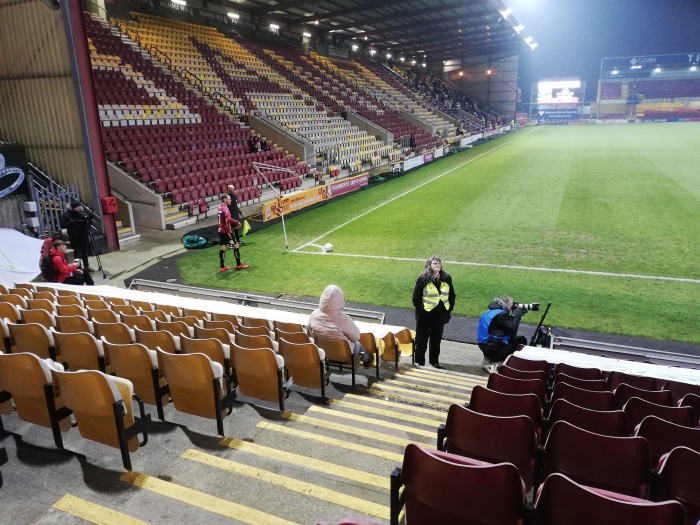 Frustration swirled around Valley Parade, adding another layer of frost to an already bitingly cold night.

On what had felt like a really important evening for Bradford City, they bowed out of the FA Cup in joyless circumstances. Shrewsbury squeezed past them thanks to a streetwise edge. It was a dire game of football, with barely anything to set home fans’ pulses racing.

The frustration stemmed from the undeniable conclusion that this was a missed opportunity for City. They were so tepid, barely laying a glove on their opponents. Shrewsbury might now be a division above, but the Bantams have not fallen so far that they should suddenly believe they are inferior. Especially to a club they defeated home and away last season.

They could have done much, much more to win this game. It wasn’t a terrible performance, but a strong City side just didn’t hit the heights. There were sporadic brusts of good attacking play. But in the main, it was too laboured. They were reluctant to sieze the tempo. Waiting, it seemed, for a visitor mistake rather than grabbing the initiative.

Shrewsbury were in no mood to contribute to making it an open encounter. Sam Ricketts’ side were ugly and cynical. They took every opportunity to slow down the play. They waited patiently for a decent opportunity, which they took when substitute Dave Edwards found half a yard of space in front of Anthony O’Connor to poke the ball into the bottom corner. The goal gave Shrewsbury even greater licence to waste time and kill any hope of City finding some momentum.

There was plenty of huff and puff from City, but no real quality. Every home player was six out of ten at best. To a man, they failed to hit the heights they’ve proven capable of this season. Harry Pritchard and Dylan Connolly looked below their sharpest. Callum Cooke’s displays of late have been patchy. Hope Akpan continues the slow slide back towards mediocrity. Nothing particularly fell, or went right, for Aramide Oteh and James Vaughan.

Had City got themselves in front, Shrewsbury would have had to show more urgency, and the contest might have proved more enjoyable. In the first half, Town keeper Joe Murphy made a fine save from Akpan. Early in the second half, Cooke siezed on a loose ball, drove forward and saw a powerful low shot deflect just wide. But this was as good as it got from City. They didn’t really enjoy a spell of sustained pressure.

It was after going 1-0 down with 24 minutes to play that City’s inadequacies grew more apparent. You waited for the fightback. The onslaught. But the charge only came in stoppage time, when a few crosses forced Shrewsbury into some desperate defending. Murphy barely had anything to do in the second half.

And it is these moments that cause you to fall short of giving Gary Bowyer a 100% approval rating. What did we have to lose by throwing the kitchen sink at Shrewsbury? Why did it feel like we held something back? When City forced some injury time corners, Richard O’Donnell gestured to go up but was told to stay back. It is curious why Bowyer didn’t want to take risks.

In Bowyer’s defence, a weak-looking bench, attacking wise, was always going to hamper him if the game needed to be chased. Zeli Ismail was the only forward option available. But even accepting this, watching Bowyer take off Pritchard and Oteh and bring on Kelvin Mellor and Danny Devine hardly filled you with confidence City were going to come back. Ismail was only brought on in the 85th minute. No one can deny Bowyer is doing a fine job as manager. But sometimes he just plays it too safe.

It was never going to be an easy night. But with a clear route to a potentially lucrative FA Cup third round draw having opened up, it grates that City didn’t fully grasp the opportunity. Losing is never nice, but losing meekly stings. A sparse Valley Parade home crowd booed at the final whistle – about what, exactly, was unclear – and now it’s back to concentrating on the league.

Saturday’s trip to Plymouth, followed by a Tuesday visit to beleaguered Macclesfield, means we will quickly move on from this night. It will be the smallest of footnotes when the review of this season is written next May. There are, ultimately, bigger priorities.

But still, you hope lessons are taken on board by Bowyer and the players. We are Bradford City, and we should aspire to be capable of much better than this.