Ryan Sparks has made a bold first major move as Bradford City’s CEO after the club has announced Stuart McCall’s contract is being extended by an extra year, keeping him and assistant Kenny Black at Valley Parade until the summer of 2022.

The City manager was out of contract at the end of this season and has come under pressure following recent poor results. The new deal is a statement of confidence from the club that McCall has the ability to revive Bradford City. And it allows him the space and stability to properly rebuild.

Ever since McCall was sacked by Edin Rahic and Stefan Rupp in February 2018, the turnover of managers at Valley Parade has been considerable. Only Gary Bowyer has retained the position for longer than 40 matches. And the result of a revolving door approach is an unbalanced squad and an ever-worsening league position. Each time a manager has departed, hopes of an upwards jolt have been quickly dashed by further struggle.

McCall was seemingly set to suffer the same fate. With City lying 20th in League Two after 13 matches, no one can argue the manager has impressed so far this season. Moments of promise have been overshadowed by a series of dismal defeats. City have failed to score in nine of their 19 league and cup matches. And they’ve only kept four clean sheets so far. A combination of goal-shy attack and leaky defence is having predictable consequences.

Supporter discontent has been growing and so the news of McCall’s contract extension will do little to ease the mood. But it is a show of intent from the club that they are trying to give stability a try and trust in a manager to get through a downturn. Make no mistake, sacking McCall is the easier decision to make right now. Or at the very least letting his contract run down. A parting of ways would not cause the controversy that reigned in February 2018 when McCall was dismissed.

But ahead of a couple of absolutely huge transfer windows for City, tying down a manager on a longer deal suggests a clearer plan. McCall can bring in players and let others leave, to go further in truly building a team that fits his aims and ethos. There is no doubt that many of the worst-performing players so far this season are ones that he inherited.

Next summer, there are just seven players in the current squad whose deals don’t expire. It is a big opportunity to revamp the squad. And if it can be done with a longer-term plan in place, it might buck the recent trend. 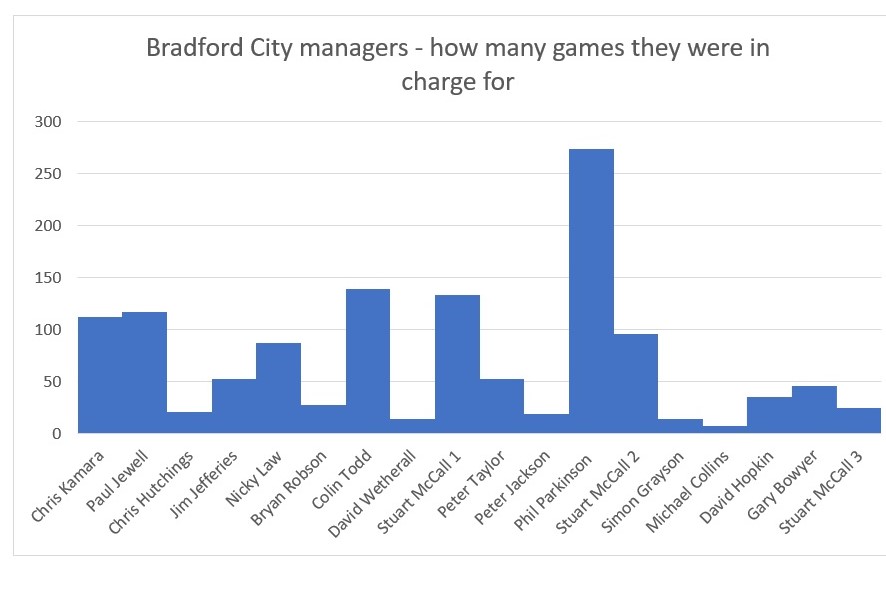 Merely extending a contract does not guarantee long-term success. To succeed, McCall clearly needs help. Not just from his new CEO, but in the scouting and recruitment resources available to him. A DoF/chief scout figure has been talked about endlessly and the need for other people to support McCall is more evident than ever.

The club must be willing to financially provide what he needs, and the stability of his longer deal means McCall can bring in people to aid recruitment that he trusts and can work well with. We know that McCall’s best times as Bradford City manager – 2016-2018 – occurred when recruitment was a team effort. The balance wasn’t quite right, but the ethos worked well.

There has been lots of criticism of the summer transfer business, and it’s clear McCall has made mistakes. In his defence, he wasn’t helped by the fact his centre back squad positions were stocked up by players on longer contracts. Or that the well paid Clayton Donaldson had the option to extend his own contract. Or that James Vaughan had fallen out with Gary Bowyer and wanted no route back to play for the Bantams.

The pandemic also had a detrimental impact. McCall was in charge barely a month when the season ground to a halt. Plans to fully evaluate the squad he had, and to look for suitable summer replacements, all went up in the air. With no lower league football taking place, and heavy lockdown restrictions, the opportunity for he or anyone working for him to get out and scout potential signings was completely gone. Much has been made of how recruitment leaned heavily on an ipad and contacts, but the options were clearly more limited than usual.

That’s not to say McCall is without blame – he clearly isn’t. As we wrote earlier this week he should have gone for a bigger squad, to fit the demands of this most unusual of seasons. He hasn’t replaced Vaughan to the same standard. The current limitations of the team, hampered by so many injuries, could have been better prepared for.

January will be huge. Ideally McCall needs a commanding centre half to play in the middle of his three-man defence – Paudie O’Connor is proving unreliable. He needs an experienced central midfielder. Another specialist right back option. A winger. And – of course – a striker or two. It is so important he and the club get it right. And work must be taking place now to captialise on the window.

In the more immediate term, City clearly need to move away from the relegation zone. The team has shown flashes of what it is capable of, but only seems to thrive when conditions are fully suited to it succeeding. Greater resilience is needed to grind out results in tougher moments. Defensively, the team must become better organised. And attacking wise, they must be more of a threat.

If City get sucked closer to the bottom two, it becomes increasingly difficult to get out. A run of wins and draws is needed to pull clear of danger and calm everyone down. The next few weeks are really important.

This is not a new situation for McCall. In his first year in his first spell, 2007/08, the team had an awful start and were near the bottom 13 games in. McCall turned it around then, aided by some good bits of recruitment in January (Lee Bullock, for example) and finished 10th. With what has gone on so far, we’d all take that now.

What McCall’s new deal, and the promotion of Sparks to CEO, also offers is a chance to imprint long-term thinking. This is not going to be a season of glory and promotion, but that can offer breathing space to really plan and get stronger. For the first time since McCall’s last tenure was brought to an end with six straight defeats, there is an opportunity for a City manager to get to the other side of a bad run of form. And to hopefully emerge stronger for it. If City had not stuck with Parkinson when he won only two of his first 15 league matches as manager in 2011/12, or six defeats in seven later that same season, the rewards of 2012-2017 would not have happened.

McCall has many weaknesses but strengths. He should not be beyond criticism or impervious from the sack down the line, but the recent uncertainty his future is not helpful to anyone. This deal gives him a surer platform, but he still absolutely has to deliver over the duration of his new contract.

The club is at such a low ebb. And whilst McCall is far from blameless for where it finds itself, he is now firmly the man who is entrusted to rebuild it on the field. It’s a big, big call from Bradford City to extend his deal – you just hope for everyone concerned that it works out.