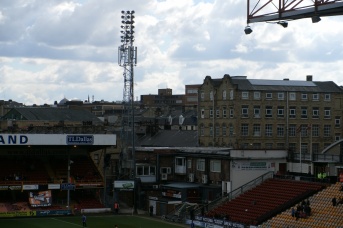 Now I’ll be honest. This season, I really thought we weren’t going to make it!

It’s not a question of faith, but on the performances I had seen (all home games) I had seen little sign that we were going to raise our game with enough consistency to allow us to survive the drop, and the subsequent oblivion it would bring…

The unexpected win at Northampton and the turgid victory over a desperately poor Macclesfield confirmed that my pessimism was unfounded, and as we were, once again, “safe” I renewed my season ticket. Now there may be those who would criticise the lack of belief shown in my delay in renewing but, in a somewhat tenuous comparison with David Syers (allegedly) – I was not prepared to renew my “contract” whilst there was such a dismal prospect for the future and the distinct possibility of me losing everything.

The prospect of a new season always revives the spirits, but the reality to me is that we have a future in this league not through the quality of what we have done but because of the woeful level of performance from those around us. We were bad but, fortunately, those around us were worse – and this should never happen again.

I say this not in the mistaken belief that we are “too big a club” or any other such platitudes, but in the belief that the approach has to change. Not since the days of Stuart McCall has the club offered any hope of an upward exit from League Two, and not since then have we had (or perhaps more accurately maintained) a set up that was positive.

Dour performances have outnumbered the inspired ones. There have been far too many 1-0 defeats, especially away from home; because of what appears to me, and maybe to many others, to be a negative approach. Now I am not advocating a gung-ho attitude, but if we had taken on teams in the belief that we could beat them, rather than contain them in the hope of beating them, then we may well have achieved more of what we wanted. As it transpired this rather misguided hope failed us on too many occasions – usually 1-0.

This is in no way doubting players’ commitment, more the manager’s approach. We never set out to lose, but equally we never seemed set up with a commitment to win – especially away from home. Whether we got lucky to win some or were even more unlucky to lose some is hard for me to say, as it is many years since I chose to travel to away games. Even so, “following” City on the radio, whilst much cheaper, is almost as frustrating as travelling. I have nothing but admiration for those who continue to travel to away matches, but from what I hear and read they often deserve much better.

However it is the home games that provide much valuable finance and the club has been positive in respect of ticket arrangements for the last few years, but it is always important that they can get supporters to commit to renewal. Mark Lawn’s recent radio interview held out the tantalising prospect of a more positive Phil Parkinson next season – perhaps if he had been more positive this season we would not have been so close to oblivion, but that is old ground now – and season ticket sales should rise over the next weeks. Which brings me to the prospect of Saturday’s game.

Swindon come here as champions and offer us the most distinct contrast possible to the level of achievement we need to aim for, compared to the level shown by Macclesfield last game.

True they may ease off – although somehow I doubt it – but it is our performance I am most concerned with. We were “safe” last week but still played it safer in our substitutions, rather than chase a game that sounded to be still in our reach. We are “safe” this week and have the opportunity to glimpse a preview of Parkinson’s promised positivism. The personnel may change by next season, but the approach should be a guide to the type of performance we can look forward to – and, if it is, it will do a lot to sell tickets. There is no such thing as a meaningless game!

As it is I am torn as to whether to even go to our last match. I never deliberately miss a game, I have never left early, I have always stay to applaud effort even when results have been disappointing – this last point being something I notice most players, especially a certain Mr. Flynn, have always reciprocated. No, the reason for my possible “no show” has nothing to do with the club, manager or players – they all deserve credit for keeping us from Blue Square or worse, and I would like the opportunity to show my appreciation to them all – especially a certain Mr. Flynn for all his efforts.

No, the reason concerns not the result but, much more importantly, how the game ends. Every year many morons and many more who should know better can’t wait to invade the pitch, often goading the away support and causing all sorts of potential problems for the players, stewards, proper fans and the club. The treatment of Northampton fans two years ago was particularly shameful for real supporters, and a disgrace to those involved.

Now I could leave early or even not go at all, but I am grateful to have a club to support next season and would like all involved to have the benefit (such as it is) of one more pair of hands applauding. This season has hardly been one to celebrate, but it is one to be thankful for – and we do have a new one to look forward to and I for one would like to go into it without any bad feeling.

So, even though I should feel good about my team and its future, if asked how I felt I would probably answer the way I would when I want to hide some of my deeper concerns…I feel fine. Hope to see you Saturday.