Our end of season ‘essay’ review series continues with Ian Sheard attempting to explain how Bradford City have performed much better at Valley Parade – 1 defeat in 15 matches – compared to previous seasons. 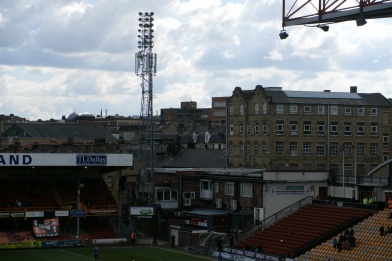 I volunteered to write this article thinking that it would be an easy one to write as I knew the answer and, having written it, would lay claims to the myth that City cannot play at home. Like a Dan Brown novel, I would be showered with accolades and awards having solved the age old riddle.

Trouble is I haven’t got an answer, just a few musings as to why our home form has suddenly picked up this season.

I don’t think that there is one major factor in City’s sudden resurgence at Valley Parade, which hasn’t seen City fans return home with as many smiles on their faces since the promotion season of ’99, but I do think the fans have played a huge part in the success. I will not give away my seat, nor mention the name of the person that sits behind me (not that I know it!) but even he has been quiet. I think this may be true of everyone’s ‘fella that sits behind’ being rather subdued. The reason for this is unclear, but, as a whole, I believe that supporters have got behind the players more this season.

At times when we have gone behind there hasn’t been the same moans, boos and complaints that have ensued over the past few seasons, instead a quiet lull has descended over Valley Parade, almost accepting the fact that we are now, unfortunately, an established League Two club.

I could be wrong, there may be people who still think this is the case and perhaps I have been guilty of wearing claret and amber tinted glasses, maybe not.

Another reason for our recent home form has been the solid back four, which I don’t think anyone can argue about. I firmly believe that if Simon Ramsden, Luke Oliver, Andrew Davies, Marcel Seip and Jon McLaughlin had been injury and suspension free that we would be further up the league. This was proved over the Christmas period where they played almost every game.

I think that it was George Graham who, when asked about what makes a successful team answered, “start at the back and move forward”. He may be an ex-Beeston man, but this proved true with Arsenal in the early 90’s and beyond. There haven’t been silly mistakes, a lack of communication or lack of experience at the back, which has paid dividends for us. Fans aren’t frustrated by gaps at the back, and are therefore more lenient with the odd misplaced pass or ballooned shot at the other end. Just a theory, but one that can be considered.

Poor referees ironically have played a part in our home form. Mainly due to the fact that the negative cries from the terraces have been aimed towards them and not the players. I do think that poor refereeing decisions have united fans and players. Crawley was not the greatest end to a match by a long way, but it was clear for the 90 minutes of ‘football’ that both fans and players were united against the appalling officiating and the standard of football played by Crawley – reminiscent of that cheered by ‘Don’ and his boys in the 70s.

A lot of players have also had a point to prove this season. Ramsden, Oliver and James Hanson have all had their doubters over the previous season, but rather than taking the easy route of others (Paul McLaren and Tommy Doherty to name two) have rolled up their sleeves and proved the doubters wrong, again giving the crowd something to cheer about. Even fringe players have ignored criticism and got stuck in showing that they are worthy of a place in the team. I may have given him some stick on Twitter, but Guy Branston has epitomised the type of player we need at Valley Parade – as has one of favourite players at the moment, Lee Bullock. Whether Parkinson has been a catalyst for this attitude is a point to ponder, but whatever it is, it has worked.

Attacking football, offers on the gate and Zumba at half time may be further reasons why our home form has improved. I may have missed a glaringly obvious solution and merely scratched the surface in terms of City’s decent home form, and some may argue that my reasons are slightly tenuous. Whatever the reasons, I hope the form continues and improves slightly and City can utilise Valley Parade and use it a fortress in a hopefully successful 2012/13 campaign.