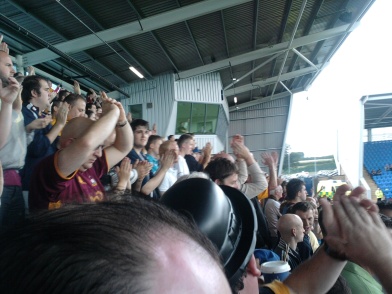 The ‘new’ Bradford City take their first trip to the brand new, New York Stadium on Saturday afternoon reportedly followed by a 2,200-strong claret and amber army. After selling out their initial allocation of 1,700 tickets, a further 500 were released and quickly snapped up as fans are eager to see if Phil Parkinson and his side can continue their promising start. It appears that the feel good factor may be back amongst the Bradford City faithful.

It’s no wonder that optimism is flowing through City fans after such a fantastic couple of weeks. Firstly, they won 1-0 and controlled the game against a Fleetwood side backed heavily by their chairman and tipped for promotion. This was swiftly followed by a resounding 5-1 victory over a fragile AFC Wimbledon and the cherry was added when Garry Thompson struck a stoppage time winner against Championship Watford!

Of course, there has been a slight concern as the plans for the school at the old club shop have fallen through and questions are being asked on whether City can now afford what appears to be a highly talented squad. However, I will leave the interesting article by Width of a Post Editor, Jason Mckeown to discuss that one negative because currently we should be concentrating on the many positives. After all it’s not often we City fans have had opportunity to do so!

Putting last season’s nightmare behind us has been discussed at length and Saturday will bring back memories of the lowest point of a rock bottom season. Then Crawley manager, Steve Evans, brought his side to Valley Parade for an evening kick off in March and a less than pretty football match ended in even uglier scenes. The result had Bradford hanging precariously above the relegation zone and the heart of their defence stripped away for the majority of the remaining fixtures.

Steve Evans took over at Rotherham just a few weeks later, but his actions that evening, along with a number of his players, installed him high up the list of our least favourite people and the desire to get one over on this recent foe will add extra spice to an already eagerly anticipated match between two promotion hopefuls – that’s right I said it!

Evans of coursed played down Rotherham’s title favourites tag to the BBC, in an attempt to take some pressure away from his squad, and instead referenced the spending power of ourselves and Fleetwood. Despite having faced Fleetwood already, Rotherham are playing at their new home for only the second time and will be desperate to impress. Therefore this represents the biggest challenge for Bradford yet.

One silver lining that came from the Crawley brawl was the resurrection of Matt Duke’s Bradford City career. After a difficult start last year, Duke first found himself dropped and then farmed out on loan to relegation rivals Northampton Town. In the aftermath of the Crawley match his replacement, Jon McLaughlin, was one of three players to find themselves facing a lengthy suspension and – having eased the relegation worries of Northampton – Duke found Parkinson begging him to do the same for City. Duke proved himself a consummate professional in the final few games producing a number of solid displays as Bradford scrambled to safety.

Since then Duke has not looked back and will rightfully be reinstated between the sticks following McLaughlin’s midweek appearance in the cup. McLaughlin himself will have to rely on his team mates to exact revenge on Evans.

Two of those team mates desperate to do just that will line up just in front of Duke, as Andrew Davies and Luke Oliver resume their partnership at centre half. Davies received his 3rd dismissal of the season for his part in the Crawley fight, Luke Oliver also received the same punishment for leaping to his team mates defence.

Much has been said by new recruits about the togetherness of this squad and Oliver, Davies and McLaughlin showed they were willing to literally fight for each other that night. If it was possible for this pair to play with more determination and commitment then it would surely occur against Evans’ side.

Their partnership was briefly disrupted midweek against Watford. Parkinson chose to rest Davies following his pre season niggle and Rory McArdle was given the opportunity to play in his more natural position at centre half. McArdle is likely to be pushed back out to right back and the unfortunate Stephen Darby will be sacrificed. By all accounts, Darby has not let anyone down in his performances so far this season – but Parkinson is likely to revert to those players that have delivered him 6 points in the previous 2 league games.

Completing the back four will be James Meredith, on the left, after a highly impressive start to the season. His versatility was on display against Watford where he was used further forward and although he may prove useful elsewhere over the course of the season, we can hope to see his confident performances at full back continue for the foreseeable future.

The midfielders are beginning to write their own names on the team sheet after a highly impressive last couple of games. From the left, Kyel Reid continues to build from where he left off last season: petrifying full backs with his pace but also offering more end product than the previous number 7.

The centre will hopefully see possibly the most dominant midfield pairing in the league stamp their authority on a third league match in a row. Much praise was given to various partnerships in the middle of City’s side last year, and the likes of Michael Flynn, Lee Bullock, Ricky Ravenhill and Ritchie Jones deserved much of the admiration they received. However, for all the huff and puff they put into their midfield battles last year, the ease that Gary Jones and Nathan Doyle have gone about their business in recent games suggests they are players of calibre above League Two.

Over recent years we have seen players who are ‘too good’ for this level such as Paul McLaren and Tommy Doherty, but their ability hasn’t matched their commitment. Flynn and Bullock, with their drive and passion, have seen off many threats to their place and it was with a certain amount of regret that we had to see them depart during the summer, but recent evidence suggests they would not get close to the current side. Club captain Ravenhill and the talented Ritchie Jones have to do a lot more than just regain their fitness to earn their places.

The only member of the midfield who may have cause for concern is Zavon Hines. Not that Hines has done anything wrong in his previous two league games; in fact he has probably been the more exciting of the two wingers. Unfortunately it may be precisely that which will cost him his place in the side.

Away from home, facing the title favourites Parkinson may opt for a more cautious approach and install midweek goal hero, Garry Thompson. Should this be the case then Parkinson will expect a more disciplined approach to Thompson’s wing play than offered by Hines.

Finally, the front two will once again be the little and large pairing of Nahki Wells and James Hanson, with Alan Connell featuring at some point from the bench. Having already produced 5 goals between them this season, Hanson and Wells look as though they could be the highly profitable partnership they threatened to be last year. Wells doesn’t look to be operating in 5th gear quite yet, and was rested in the cup tie, but he showed a poacher’s instinct to latch on to the mistake by Wimbledon’s defence last Saturday and real composure to round the keeper and slot the ball home.

Hanson, on the other hand, has begun the season sharper than ever and is surely now winning over even his most ardent critic. Having already found the back of the net three times and dominating the aerial battles, what more arguments can be used against the spearhead of City’s attack? Last season Hanson dominated one of League Two’s most respected defenders Ian Sharps, now of Rotherham, and I’m sure that will be feature in the back of the centre half’s mind as the pair prepare to do battle once more tomorrow.

With only one change likely from the side that was victorious against Fleetwood and Wimbledon, the additional 5 cup heroes who helped overcome a side two divisions above us will have to settle for a place on the bench. Along with Ross Hannah – who again scored twice for the reserves – that completes a full complement of 7 substitutes and this competition for places is the biggest positive of all.

McLaughlin, Darby, Carl McHugh, Thompson/Hines, Will Atkinson, Hannah, Connell are likely to be watching from the dugout, Ravenhill and Jones are still to return and we are told youngsters Bass and Baker have a lot of promise. Those wearing the shirt know they cannot under-perform, as there are more than capable replacements waiting in the wings. Those players watching will all be frustrated for now but over the course of the season their chance will come and we can be confident that they are all up to the task.

Parkinson will have a pleasant headache as he prepares to stick with those players who have served him so well against Fleetwood and AFC Wimbledon. But he knows he will soon have even many eager and able replacements knocking on his door.

Like Loading...
‹ Finding the line between banter and abuse
A rude, rude awakening after PP forgets to be pragmatic ›