Home › Opinion › The eyes of the world are upon us, but it is what we see with our own that matters

The eyes of the world are upon us, but it is what we see with our own that matters 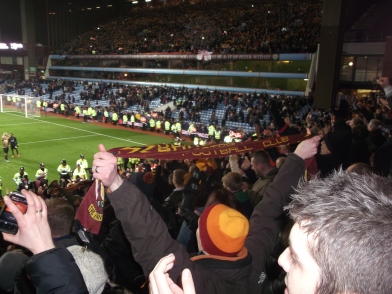 If I have one regret about Bradford City’s time in the Premier League, purely from the perspective of being a supporter, it was the lack of interest I took in the national media coverage at the time. I barely read any newspapers, paid little attention to what they said on 5Live and – although I watched Match of the Day most weeks – rarely recorded an episode for prosperity. Over the subsequent years of City rarely being mentioned outside of our local media outlets, and beyond a 20-second clip of the weekend’s goals on an ITV/BBC highlights programme, it felt like the media glare of the Premier League days had been a missed opportunity.

So the current media storm around the club is a wonderful feeling, stirring memories of how it felt being a large part of the nation’s consciousness at the turn of the millennium. Yet in other ways it feels less engaging than I imagined it would be. I don’t find myself trawling through every column inch that every newspaper is affording us, when over the last few years any tiny scrap of national media attention was considered something to savour. I feel a bit blasé about us appearing on Sky Sports News so often.

Don’t get me wrong, it is lovely still. I am proud as punch when I read the likes of Henry Winter, Oliver Kay and David Conn – personal heroes of mine – writing such positive things about our cup exploits. Martin Tyler is the king of commentators for me, and re-watching both legs of the Aston Villa semi final are enhanced by the way the Sky man superbly captures the emotion of the occasion. It’s also fantastic to see such wonderfully kind people like Gary Jones, Matt Duke, Carl McHugh and James Hanson being interviewed in-depth by newspapers and TV – they deserve it. But a lot of the other media coverage is just noise. Quantity making it harder to pick out the quality. This isn’t a moan at all, just a personal surprise that the novelty factor hasn’t lasted quite as long as I might have expected.

Part of this reason of reserved feelings is the sharing of something so personally important and precious to you with people who don’t hold that same love and care of attention. For all the very high quality articles that have been produced, it’s not hard to find others littered with factual errors and even spelling mistakes. Zavon Hines got the opening goal in the first leg against Villa, apparently. As supporters, we have such an in-depth level of knowledge about our specialist subject of Bradford City, that reading, hearing or viewing somebody else wilfully display their comparative ignorance can be irritating. As Alan Partridge once said, “Stop getting Bond wrong”.

Then there are the idiots, ones who try to take advantage of the situation to further their own standing. As we pulled up to Villa Park last Tuesday, Talksport presenter Adrian Durham was telling a national radio audience that a Bradford City win this evening would be a bad thing for English football. His reasoning? If we were to earn a spot in the Europa League, it would reflect badly on the nation when we inevitably bowed out of the competition straight away. Don’t bother trying to pick holes in Durham’s argument – such as why one of the greatest modern day football fairy tales football should be considered less important than who next season might represent England in a competition most people couldn’t give a toss about. Durham didn’t mean what he said; he was just trying to get a reaction.

In a flash I was taken back to our Premier League days, and a name that became synonymous with our battle against the odds during 1999/00: Rodney Marsh. A run-of-the-mill pundit on Sky (but great player, so I’m told), on the eve of that season Marsh predicted we would have no chance of staying up and went on to attack our efforts on a weekly basis. “If Bradford stay up I will shave my head” was his bold claim. “Are you watching Rodney Marsh?” was our defiant chant whenever we won.

But it wasn’t long after Marsh was forced into the ‘humiliation’ of having his head shaved at Valley Parade that you realised that, ultimately, he was never concerned with whether he was going to be proven right or wrong, or stupid. He was simply furthering his own punditry career by spouting controversial views, to gain attention. And it worked for him (for a time). He rode on the back of our success, and we had no choice but to put him on the map.

Durham’s efforts are similarly intended: look at me. He doesn’t think that City winning the League Cup would be bad for English football, deep down – what right-thinking football fan would? – he just wanted the attention and to stand out from the bulging media crowd. Ignore him.

Equally disappointing is the sudden volume of attacks Bradford City have experienced from other football supporters. Sure, 99% have been magnificent towards us – even followers of our near neighbours Huddersfield and Leeds – but a minority have used this moment to attack the club over the two spells of administration experienced ten and eight years ago respectively. One typical comment was the sarcastic, “Good for plucky little minnows Bradford and their 25,000 all-seater £40m stadium and recent administration to escape millions in tax. A true football fairy tale.”

Given the colossal amount of football clubs who have gone through administration since us – many of whom renegaded on debt obligations in a quite shameful manner, with barely a bump in their on-the-field fortunes – for us to attacked in this way feels genuinely hurtful. I mean administration was far from our finest hour and no one is expecting sympathy for what we went through, but a quick look at how the club has sunk down the divisions since the double-administration – still saddled with some of the issues – would surely demonstrate that we have hardly profited from it. Or do we deserve a life sentence of never being happy again?

I guess this placing of everything Bradford City under the microscope in the manner that has occurred is always going to throw up a few bum notes. And the arrows that Durham, plus a few bitter rival fans, have attempted to throw at us should be weighed up against the incredible amount of goodwill and nice things that have been said about us. A minor voice in a sea of positive noise. But it all reinforces a natural urge to throw a protective cloak over this football club and the community of supporters. This is our life that you are talking about.

Because as fantastic as it is to be generating headlines around the world; to have a huge amount of work colleagues who want to talk City; to know that other football fans have opinions on Nahki Wells’ potential to play in the Championship; to be trending on Twitter; and to have many, many Bradford City fans suddenly rediscover a love for the club that had been lost – these aren’t, and shouldn’t, be dictating the mood. Merely providing the background.

I have enjoyed reading dozens and dozens of newspaper match reports of the Arsenal and Aston Villa home and away games, but I didn’t need to read them. I have re-watched all three televised on my Sky TV box, but when I close my eyes and picture those great evenings it is from the viewpoint of my place in the stadium rather than the multiple angles TV provides. I was fortunate to be there first hand to witness all the incredible evenings. Collecting from them a vast portfolio of happy memories – memories that will stay with me for many, many years to come. Witnessing history being made first hand, that is priceless. Everything else is a souvenir to remind you of this incredible journey.

Unsure of your travel plans to Wembley? Want to show your appreciation to the club for their cup run or to wish them luck? Get involved with our community pages.