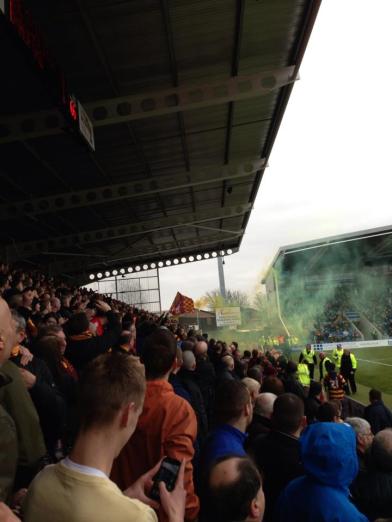 Roberto Martinez made a poignant point about Wigan’s supporters after his team’s eventful FA Cup Semi Final win over Millwall. Criticised for the number of unsold tickets for the Wembley occasion, Martinez argued that Wigan should be remembered for the quality of their fans rather than their quantity.

Bradford City have a fan base which is both heavy in quality and quantity. Saturday’s trip to Chesterfield proved this. The atmosphere generated from the near three thousand at the Proact Stadium was the best I have been to this season in the league. There was a strong sense of belief in the North Stand that a victory over the Spireites could set up the most unimaginable automation promotion. There was a definite bite in the air on Saturday. Maybe it was the anticipation of the outcome which gave the day its edge.

But as the game progressed, this edge and bite started to descende into an uncomfortable sensation which I rarely feel at Bradford matches. The release of smoke flares did not help the situation amongst some City fans. It’s easy to understand why many were disappointed by their release. I don’t think whoever set them off intentionally meant to upset people. I think it was a person caught up in the moment and frankly did not understand the pain it could cause.

Flares have become more regular in English football stadia. However our circumstances are different to any other club in the country. For that reason, one would hope that we don’t see them return in games that City play in.

The confidence that City fans had at the start of the day soon turned to arrogance. Standing in the walkways, a set of fans towards the bottom of the North Stand seemed to get along with the stewards monitoring them. These stewards realised that City fans were in Chesterfield for a good time and, from my position, things appeared fine. However, as the game progressed, the shift in atmosphere was epitomises by the chant “We’ll do what we want”. I have never been a fan of the chant and Saturday’s tone and rendition made me dislike it even more.

It seemed that Ricky Ravenhill goal opened an underlying tension which threated to spill over, as fans entered the field of play. From what I could see and have since read from social media sites, the ejection of a young fan from the stadium was an instigator. I saw a young teenager being walked off the pitch by a steward, whilst several City fans ran to pull the youngster back. I’m not sure if this was the sole reason for the unsavoury scenes at the full time whistle, but it seemed to be a contributing factor.

Some have also said a steward’s over-zealous celebration of Chesterfield’s late equaliser further incensed fans. Maybe it was the emotion and the pressure of the game, or other factors I don’t know about, which got the better of individuals.

Either way, there is nothing that can justify the disgraceful scenes after the final whistle, where fans and stewards battled each other and punches were thrown. Violence, hooliganism, or whatever you want to call it, is for some reason interconnected with football. Whilst wrong, it does not surprise me seeing it at football matches. But it was the pure hostility of ‘fans’ kicking or thumping advertising boards and worse, individuals spitting and chucking objects at the stewards which really shocked me.

Towards the end of the game, some tried to surround a Chesterfield player who was getting a ball near the advertising boards. I have never seen this kind of vileness before in a City end. It left a very bitter taste in my mouth after the game. We are a proud club, and the actions of a small minority is damaging the fine reputation which has been built. It should be emphasised that this is a minority, but even so, their actions cannot be tolerated.